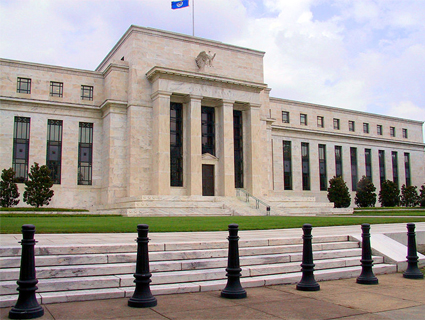 The Federal Reserve will soon make a decision that will determine whether big banks quit dealing oil, electricity, and metals—or expand their control over the flow of these essential goods.

As guardians of the nation’s credit supply, big banks have cheap access to money, and can pick and choose which companies get loans. Because of this, federal law long prohibited federally insured banks from directly entering other businesses—anything from running railroads to oil refining to trading grain—to prevent them from unduly influencing the real economy. When the law was loosened in 1999, banks jumped at the opportunity, expanding into markets for basic commodities, largely outside of public view.

That all changed last month when the Beer Institute, which represents companies like MillerCoors, publicly accused Goldman Sachs of hoarding aluminum to manipulate prices. Soon after, the New York Times published a front-page story on how the bank uses its warehouses to distort the market and hike what we all pay for soda cans and cars. The events have sparked public outcry and spurred government officials to clamp down. The Justice Department is now investigating if banks inflated the price of metals, the Commodities Futures Trading Commission may follow suit, and the Federal Energy Regulatory Commission recently slapped JPMorgan Chase with a $410 million fine for manipulating electricity markets in California. The Senate Banking Committee has already convened two hearings on whether federally insured banks should own power plants and refineries. Most significantly, the Federal Reserve—the most influential regulator of big banks—announced it is reviewing its decision that allowed banks to start storing copper and selling oil in the first place. The media and congressional attention had an impact. JPMorgan Chase recently announced plans to shut down its physical commodities business. Goldman Sachs and Morgan Stanley, too, now reportedly plan to discard the warehouses and terminals they use to store metals and trade oil.

It may seem like the banks got busted and are sheepishly leaving the market. But without legal or regulatory changes, the door stays open. Once public attention fades and commodities profits return, little will stop banks from returning to their old tricks. That’s where the Fed comes in.

Unless Congress passes a new law that places specific limits on banks’ physical businesses, the decision as to how firmly to close the door on bank ownership of physical assets will be up to the Fed. It’s a choice the Fed will have to make soon, as it must determine by this fall whether Goldman Sachs and Morgan Stanley can continue to deliver oil, store metals, and own warehouses and pipelines. The two financial giants were once investment banks, which have always been allowed free reign in the commodities business. But at the height of the 2008 financial crisis, both firms abandoned their status as investment banks in order to qualify for federal insurance. In return, they were supposed to end their riskier businesses—including those in physical commodities.

At the time, the Fed granted Goldman and Morgan Stanley a two-year grace period. But the banks have since argued that they can continue owning these physical assets and operating these businesses, and won three additional yearlong exemptions that will expire this fall. The Fed’s decision directly affects only Goldman Sachs and Morgan Stanley, but experts say it will effectively draw the parameters for all federally insured banks, which will accuse the Fed of acting unfairly unless it awards them the same privileges.

1. Pull out. The Fed forces Goldman Sachs and Morgan Stanley to get out of the physical commodities business outright. This means the banks can neither trade physical goods like oil and metals, nor own assets like refineries and warehouses. If the Fed chose this option, it’s likely it would also revoke the rights of JPMorgan Chase and other banks to play in these commodity markets.

2. Own it, but don’t manage it. The Fed allows Goldman Sachs and Morgan Stanley to keep their commodities businesses as forms of passive investment known as “merchant banking.” This permits banks to own coal mines and pipelines, so long as they don’t make the day-to-day decisions about how these businesses run. Merchant banking rights usually expire after 10 years, so the banks wouldn’t be holding these companies indefinitely. Goldman Sachs says it owns its Detroit metals warehouses—the center of the New York Times piece that detailed its aluminum shenanigans—as a form of passive investment. In theory this prevents banks from deciding, for example, which customers to prioritize when delivering physical products like aluminum, or even from knowing when or where a barge delivers oil. In practice, though, the firewall is flimsy and largely unpoliced. It’s also unclear how the Fed actually ensures the ownership is “passive.” What’s more, the arrangement doesn’t eliminate the conflict of interest a bank faces when providing capital to rival warehouses or refineries, or the unfair advantage banks enjoy over them by having cheaper access to money.

3. Keep the oil, scrap the pipeline. The Fed permits Goldman Sachs and Morgan Stanley to continue commodity businesses that “complement” their financial activity. This is the same justification the Fed used beginning in 2003 when it granted Citigroup, JPMorgan, and other traditional banks the right to start trading physical goods like oil, natural gas, and agricultural products, alongside the financial contracts that help set their price.

Until now, the Fed has capped the value of a bank’s physical commodity activities to 5 percent of its tier-one capital—the amount of money it has on hand to cushion losses. The Fed has also generally forbidden JPMorgan and Citigroup from owning any of the physical assets and infrastructure underlying their trades. Assuming the Fed stuck to precedent, this would allow Goldman Sachs and Morgan Stanley to buy and sell goods like oil and metal, but not own assets like terminals or warehouses. But 5 percent of a big bank’s tier-one capital is still a lot of money: $2.8 billion for Morgan Stanley and a staggering $3.7 billion for Goldman. Plus, history shows restrictions on ownership don’t stop banks from sowing harm. J.P. Morgan gamed California electricity markets through tolling agreements with power plants that let it sell their electricity; it never actually owned power plants.

4. Bow to Wall Street. The Fed permits Goldman Sachs and Morgan Stanley to continue both trading physical goods and owning physical infrastructure, based on the idea that these are activities are “grandfathered” in from their investment banking days. This is the path the banks have been pushing. They base their argument on a broad, vague, and largely untested clause of the Gramm-Leach-Bliley Act of 1999 that says any firm that becomes a bank can continue “activities related to the trading, sale, or investment in commodities and underlying physical properties,” so long as it conducted these businesses before 1997. As Reuters first reported last year, Goldman Sachs and Morgan Stanley have been tussling with the Fed over this provision, claiming it allows them to continue all their existing commodity businesses indefinitely. If those two banks get their way, the value of the goods they can hold will be vastly higher than what other commercial banks are currently permitted. That’s because the Gramm-Leach-Bliley provision pegs the value of a new bank’s commodity activities to 5 percent of its total assets, rather than its tier-one capital. As of their March shareholder reports, Morgan Stanley would be permitted to engage in up to $40 billion worth of commodity activities, while Goldman Sachs would be able to engage in just under $48 billion worth. Other banks would demand similarly expanded rights, and banks’ involvement in physical commodities would explode.

What’s Congress’ role? The Dodd-Frank Act, the 1,200-plus-page financial-reform legislation Congress passed in 2010, doesn’t address banks’ activities in physical commodities. The main law still governing them is the Gramm-Leach-Bliley Act, which is best-known for gutting Glass-Steagall, the Depression-era law that separated commercial and investment banking.

So there is a fifth option. Congress could eliminate the parts of the Gramm-Leach-Bliley Act that grant banks a legal basis for entering these markets. The 21st Century Glass-Steagall Act—proposed by Sens. Elizabeth Warren (D-Mass.) and John McCain (R-Ariz.) last month—would do just that. So far it’s unclear the bill is anything but symbolically forceful. But its answer may prove the safest bet.