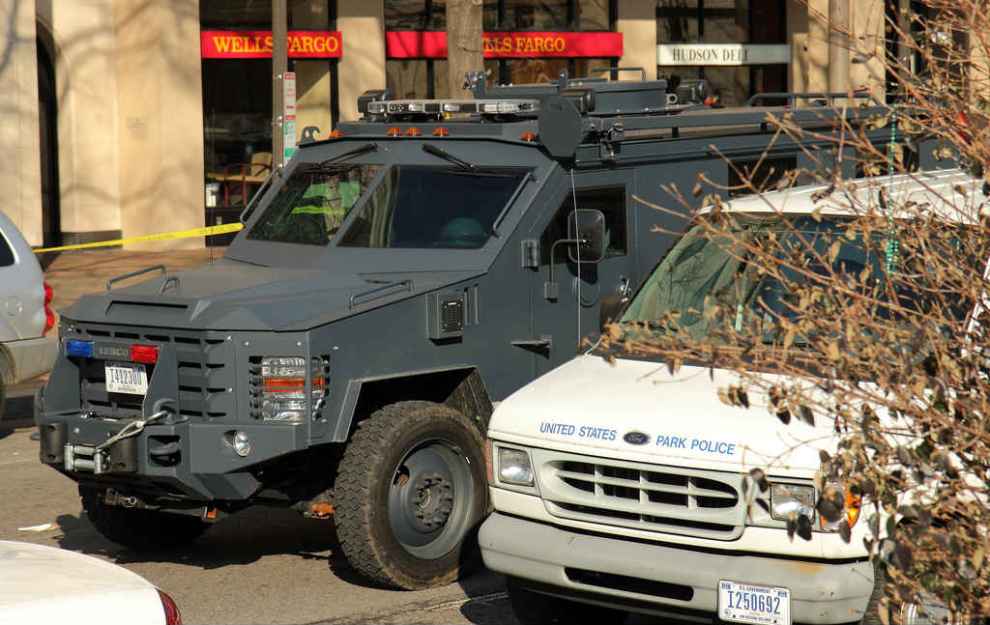 After the public release of a document in which he suggested that Occupiers and libertarians pose a domestic terror threat to Concord, New Hampshire, the city’s police chief has backed away from the claim.

In an application to the Department of Homeland Security (DHS) seeking more than $250,000 to purchase an armored police vehicle, the capital city of New Hampshire specified the local branch of the Occupy movement and the Free State Project, an effort to recruit “liberty-loving people” to relocate to the Granite State, as potential sources of terrorist action.

“The State of New Hampshire’s experience with terrorism slants primarily towards the domestic type,” the filing reads. “We are fortunate that our State has not been victimized from a mass casualty event from an international terrorism strike however on the domestic front, the threat is real and here. Groups such as the Sovereign Citizens, Free Staters and Occupy New Hampshire are active and present daily challenges.”

While the sovereign citizens movement has a history of racism and violence, Police Chief John Duval now says that he doesn’t actually believe the Free State Project or Occupy New Hampshire are domestic terror threats. “I wish I would have worded things different in retrospect,” he says. “I understand why their eyebrows are raised about that.” He chalks up the wording to the limitations of writing a detailed proposal in only three pages and says it was meant to refer to the “unpredictable nature of unpredictable people who attach themselves to otherwise lawful situations.”

Duval has no plans to issue a formal apology, but he has exchanged emails with Carla Gericke, president of the Free State Project, to explain his position, which he has also attempted to clarify with local reporters.

The city’s application says the vehicle, a Lenco BearCat G3, could be used to respond to acts of terrorism involving “chemical, biological, and radiological materials as well as explosive gases” and smaller-scale crises such as “suicidal and hostage situations.” Duval says his department needs the vehicle to replace a 1981 Air Force Peacekeeper that’s fallen into disrepair. Concord’s population is just over 40,000, but as a capital city in the state that hosts the first-in-the-nation presidential primaries, Duval doesn’t want to rule out the possibility of an attack like the Boston Marathon bombing.

That explanation is unlikely to satisfy Gericke, who accuses the city of “acting in secrecy and making false allegations behind our backs.”

Her organization has referred to the vehicle, which is built atop a Ford F-550 frame and has armor that can sustain .50-caliber rifle fire, as a “tank.” She says the the Free State Project has received “overwhelmingly” positive feedback about its concerns. “I think that law enforcement doesn’t necessarily understand where we’re coming from,” she says. “I think they think we’re anti-police, but really what we are is pro-freedom and pro-accountability.” (Gericke does note that she is suing the Weare, New Hampshire, police department for arresting her in 2011 on a wiretapping charge, later dropped, for allegedly recording a police traffic stop.) On Monday, the Free State Project demanded an apology from city officials.

This Friday, Occupy New Hampshire plans to hold its first general assembly in more than a year to discuss the application. Occupy demonstrations across the country have been met with police using armored vehicles. A May 2012 protest in Oakland, California, for example, drew out a $323,000 vehicle purchased by county officials from the private military company formerly known as Blackwater.

Duval rejects the idea that police departments have become overly militarized. The BearCat G3, he says, is an unarmed “box of armor on wheels,” not a tank. “Do I fear a .50-caliber offensive attack on my office?” he asks. “I do not. But boy, that makes me feel real comfortable when there are high-powered rifles out there.” Instead, he believes that criticism should be directed at individual departments that may have overstepped their authority: “All of these things, like the BearCat or like any other piece of equipment, are tools, and they all have their appropriate use.”

“The Free State movement and Occupy New Hampshire have no history of violence, so it’s very unclear why any police department would need to use an armored vehicle when addressing these groups,” says Devon Chaffee, executive director of the NHCLU. “But we all agree that we want the police and we want our communities to be safe, and what this conversation is about is really what type of equipment and tactics are most appropriate to achieve that goal. I think this application has sparked a very important conversation.”

While DHS has approved Concord’s request, the city council, which unanimously approved the application last September, plans to meet next Monday to first address lingering concerns.