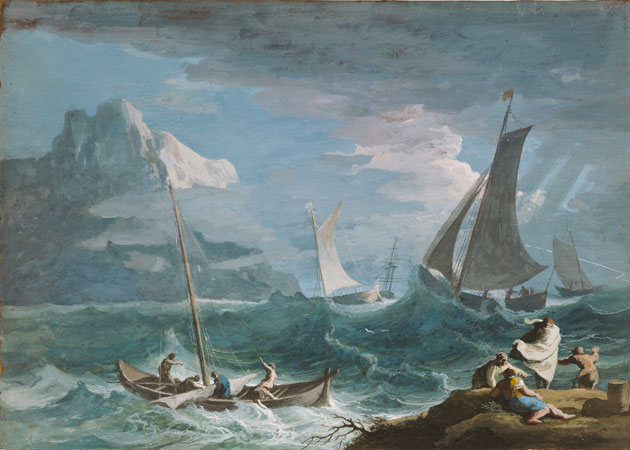 Though it may be hard to remember during summer vacation, humanity’s relationship with the oceans consists of more than just sunbathing and body-surfing. Our fate is bound up with the largely mysterious bodies of water that spread over 70 percent of the earth’s surface. Sink in to the articles below to learn about the shark hunters, shrimpers, and Navy SEALs who call the briny deep their home.

For more long stories from Mother Jones, check out our longreads archive. And, of course, if you’re not following @longreads and @motherjones on Twitter yet, get on that.

Whether in the sea, in a soup, or in a tornado, no fish strike a combination of both fear and curiosity in humans quite like sharks. Here, scientists and volunteers set out to gather data on the toothy predators’ movements to try and reverse the animal’s dwindling population numbers.

Just as the captain raises the anchor to motor to another spot, a spool of 900-pound monofilament begins unwinding furiously off the stern. A buoy attached to the line pinballs across the choppy ocean. A cameraman in a wetsuit readies his $50,000 waterproof HD-camera rig. A scientist grabs a steel lasso and a cordless drill, and an engineer snatches up the rocket-looking thing, which includes a plastic tube filled with sensors and a satellite transmitter.

A Sea Story | William Langewiesche | The Atlantic | May 2004

In 1994, the ferry Estonia sank into the Baltic Sea, taking more than 850 people with it. Originally the largest ship of the newly free nation, which had just emerged from Soviet rule, the Estonia became one of the deadliest maritime disasters of the century. Langeweische’s grippingly narrates a moment-by-moment account of “anarchy on the high seas.”

Rolf Sörman never found even such shelter in a raft. When he took Yvonne Bernevall’s hand and dropped with her from Deck 8 into the ocean, he knew the temperature of the water was lethal. He gave himself a few minutes at the most before he would succumb to the cold. But he was so keyed up that the water felt neutral when he plunged in. In Baltic terms that means it felt warm. When he hit the water, he kept holding Bernevall’s hand.

With a new ship and a new strategy to match, the US Navy was prepared for “a new kind of coastal combat.” But Freedom came in years late and $400 million over budget, and its structural and design problems belayed a larger issue with the Navy’s new approach to combat.

Is it a small, fast amphibious ship for slipping teams of Marines, Navy SEALs and river troops into an enemy’s coastline? Is it an ultrahigh-tech mothership for carrying diving, sea-skimming and flying robots? Is it an affordable version of the Navy’s large destroyers, meant for the export market? Is it the flagship of an industrial scheme designed to revamp American shipbuilding?

The answer is…all of these things. And none of them.

A Son of the Bayou, Torn Over the Shrimping Life | Amy Harmon | The New York Times | January 2011

Even after his father left the industry, Aaron Greco was drawn to shrimping. Only a few thousand Louisianians may make their living as fishermen, but Greco says it’s in his blood.

A few months later, Buddy traded $800 and bartered time and equipment for a 51-foot boat that needed, among other things, a new layer of fiberglass. When the Deepwater Horizon oil rig exploded 41 miles offshore last April, they were almost done with the seemingly endless repairs. Their goal had been to finish before the young brown shrimp, at their sweetest and most succulent, began to move in May from the marshes to spawn in the salty gulf.

As humans change the atmosphere, develop chemicals and pollutants, and fish harder and faster, the planet’s seas are growing worse and worse. That’s bad news for every life form that depends on them—including us.

I’m alarmed by what I’m seeing. Although we carry the ocean within ourselves, in our blood and in our eyes, so that we essentially see through seawater, we appear blind to its fate. Many scientists speak only to each other and studiously avoid educating the press. The media seems unwilling to report environmental news, and caters to a public stalled by sloth, fear, or greed and generally confused by science. Overall, we seem unable to recognize that the proofs so many politicians demand already exist in the form of hindsight. Written into the long history of our planet, in one form or another, is the record of what is coming our way.