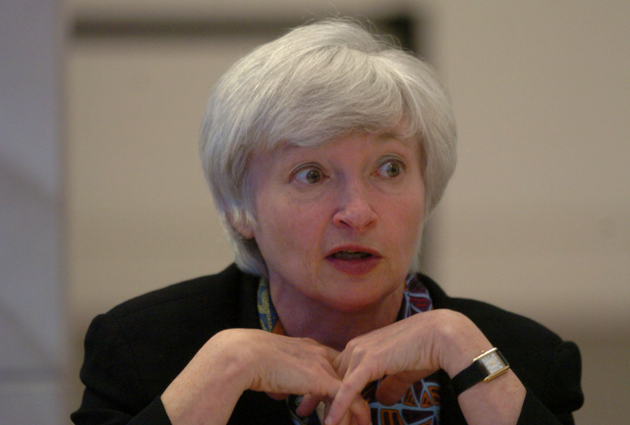 Update, October 9, 2013: On Wednesday, Obama will nominate Janet Yellen as chair of the Federal Reserve. She is set to become “the most powerful woman in American history.”

If President Barack Obama nominates Janet Yellen, the second-ranking official at the Federal Reserve, to be the next chairman of the central bank, she would be the first woman to ever occupy the post. This fact—and reports that Obama is considering former Treasury Secretary Lawrence Summers for the same post—has prompted editorials worrying that Yellen wouldn’t be up to the job, as well as more subtle attacks on her lack of “gravitas.”

Although Obama has spoken of the importance of diversity in his administration, his inner economic team is a boys’ club, says Sheila Bair, a former head of the Federal Deposit Insurance Corporation who has pushed publicly for Obama to pick Yellen to run the Fed. The top administration jobs that most affect the financial industry, Bair explains, are the chair of the Fed, the secretary of the Treasury, the head of the New York Federal Reserve, and the comptroller of the currency. And although there have been a few women in other top economic policy positions in the Obama administration, none of these big four spots has ever been filled by a woman.

“This has been a historical trend which Obama has good opportunity to break,” Bair says. Bringing in a woman would be more than just symbolic. Yellen breaking the gender barrier in the administration’s top economic circles could have practical implications, too. Many women who have worked in or with the administration in senior economic policy positions—including Bair, Sen. Elizabeth Warren (D-Mass.), and Christina Romer—have said publicly they felt excluded and marginalized by men in the decision-making process. Having a lady heading the Fed could change that.

Yellen running the Fed could also be important to women in economics. Only about a third of the people entering Ph.D. programs in economics are women, and only about 10 percent of all full-time tenured economics professors in the country are female. “There’s a kind of culture within the world of economics and finance which is very testosterone-driven,” says Margaret Blair, an economist at Vanderbilt University School of Law. Lynn Stout, a professor of corporate and business law at Cornell University, agrees. “Economists are not among most friendly to women when comes to a culture,” she says.

Yellen could help shift the economics profession away from being an “old boys’ club,” Stout says. “It would be encouragement to other women who might be more willing to put up with the hazing they generally receive when they try to study economics at the Ph.D. level…I think the symbolism is huge.”

Yellen is immensely qualified to run the Fed. She’s worked there for nearly two decades, was chair of the Council of Economic Advisers under President Clinton, and previously had an academic career at the University of California-Berkeley. And she knows what she’s talking about. A recent study also found that Yellen was the Fed policymaker who was most often right between 2009 and 2012. The Wall Street Journal recently scored 14 Fed policymakers on 700 predictions they made on growth, jobs, and inflation during the recovery, and found that the “most accurate forecasts overall came from Ms. Yellen.”

Perhaps the best argument for appointing Yellen is the alternative. Summers—who is perhaps most famous for his comments at a 2005 economics conference implying that women may be “innate[ly]” less intelligent than men—is a lifelong deregulator who helped cause the financial collapse. Yellen was one of the only top Fed policymakers who predicted the housing crisis. In 2005, she warned that “house prices are abnormally high—that there is a ‘bubble’ element.” Summers at the time said the idea was based on a “Luddite premise.“

Summers also has been accused of bullying those who don’t share his position. In 2008, he reportedly shot down Romer, who had just been appointed chief White House economist, when she proposed a larger stimulus than he thought was practical. In the 1990s, he reportedly yelled at Brooksley Born, the former head of the Commodity Futures Trading Commission, when she proposed regulating the complex financial products called derivatives that ended up contributing to the financial crisis.

Yellen’s reputation, on the other hand, “is one of collegiality,” says Sheila Bair. “I can only assume she would be much more inclusive [than Summers].”