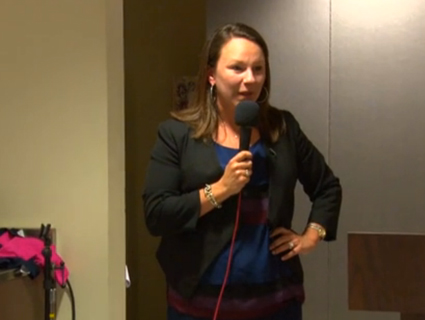 At a town hall forum in her district on Monday that was sponsored by a local tea party group, Roby was asked by an attendee what she would do to counter the supposed abuses of President Barack Obama, whom the man described as ineligible for office, a communist, and a tyrant. Here’s how the fellow put it: “What I need from you is to know what you can do, you and your fellow non-communist colleagues in the lower House, what you can do to stop these communist tyrannical executive orders laid down by this foreign-born, America-hating communist despot?”

After the room erupted in laughter and supportive applause, Roby responded with a smile: “Thank you for your question—he said it loud enough that you all heard it.” Roby did not push back on the questioner’s claims. Instead, she validated his fears. “Look I can’t emphasize the oversight part of my job enough,” she said. “And I think that that gets lost in what we do every day, because that’s exactly what we’re doing—we’re chasing down these executive orders, we’re chasing down these rules that are promulgated, that are backdoor legislation, whether it’s the EPA, the IRS, go down the list.”

Contrast Roby’s dodgy reply with the direct response employed by McCain during the 2008 campaign, when a McCain supporter called then-Sen. Obama “an Arab.” McCain grabbed the microphone and wouldn’t let this stand: