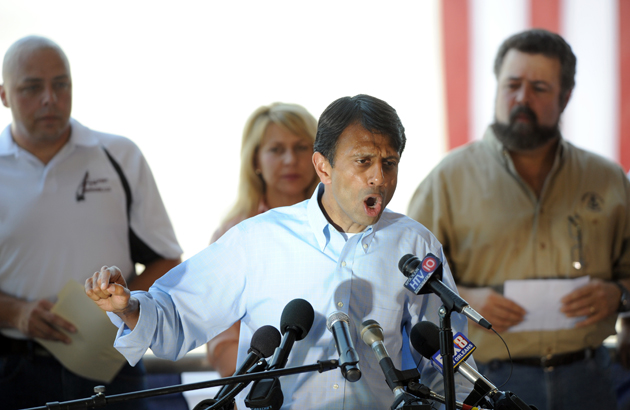 In July, the Southeast Louisiana Flood Protection Authority–East, a regulatory board that was reformatted after Hurricane Katrina to shore up the state’s flood defenses, filed a lawsuit against about 100 oil and petrochemical companies alleging a systematic destruction of the state’s wetlands and coast. The backlash was swift—and not just from the oil industry. Garret Graves, the head of the state’s Coastal Protection and Restoration Authority, dismissed the suit as the work of an overzealous trial lawyer. Gov. Bobby Jindal (R) demanded that the levee board withdraw its suit. And now Jindal has gone one step further—asking the court to dismiss the lawsuit. Here’s the Baton Rouge Advocate:

“We have asked the (Coastal Protection and Restoration Authority) to look into intervening to make sure the courts understand this suit is not authorized, that the levee board did not have the legal authority to do this,” Jindal said.

The crux of the legal dispute arises from administration claims that the permission of the governor and attorney general is required before the board can hire special counsel, as they did to prepare and pursue the lawsuit. The board, however, argues they are bound by a different set of requirements that only call for the attorney general to sign off on lawsuits.

The levee board has taken on a more activist role since Hurricane Katrina, in part due to the work of its secretary John Barry, whose history of the 1927 Flood has become required reading in South Louisiana. But the lawsuit represents the board’s most dramatic step yet, and the first real showdown with authorities in Baton Rouge.