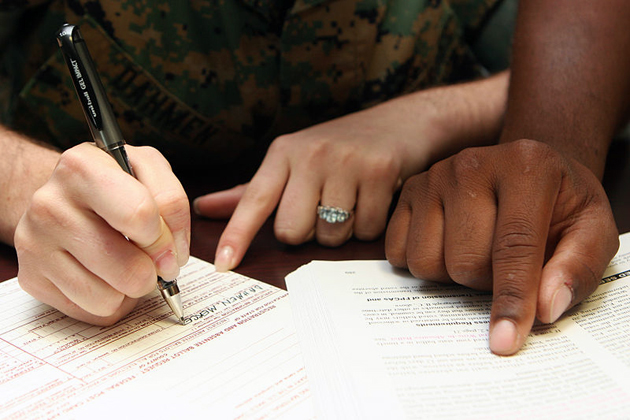 Kansas Secretary of State Kris Kobach is no stranger to immigration controversy. The Republican’s fingerprints can be found on all sorts of immigration laws around the country, including Arizona’s controversial SB 1070. He’s one of the key cogs in the national movement of immigration hardliners and as recently as April defended his use of the phrase “self-deportation” (a phrase even Newt Gingrich called “anti-human”).

Kobach’s support of another immigration-related voter registration law could land him in court. The ACLU said Tuesday that Kobach and the state of Kansas are violating the National Voter Registration Act by preventing people from registering to vote who haven’t proved to the state’s satisfaction that they’re US citizens. About 14,000 people — about a third of the people who’ve submittted registration forms in 2013 — are in “suspense,” meaning state elections officials can’t verify that the person is actually eligible to vote. In many cases this has to do with fact that proof-of-citizenship documents aren’t being transferred to Kansas election officials from Kansas DMVs—despite a $40 million system designed to streamline the process. The ACLU also says Kansas is failing to make its election forms widely available and is generally failing to uphold its responsibilities under federal election law.

The ACLU has threatened to sue the state of Kansas if it doesn’t address its concerns.

ACLU’s main beef is with Kansas’ requirement that first-time voters in the state provide proof of citizenship. Arizona enacted a similar requirement in 2004, but the US Supreme Court struck it down earlier this summer. The federal form requires registrants to check a box affirming their lawful right to vote under penalty of perjury. The Supreme Court, in a 7-2 decision written by arch liberal Justice Antonin Scalia, said that states had to accept the federal registration form unless it could convince the Election Assistance Commission (a federal body charged with making voting easier in the wake of the 2000 Florida elections debacle) to change the requirements.

Kobach, through his media office, wouldn’t answer questions about the ACLU’s allegations. But he did issue a statement:

“We are reviewing the letter submitted by the ACLU. However, the ACLU and other organizations on the Left have made clear from the start that they oppose proof-of-citizenship requirements for voting and that they will attempt to prevent the State of Kansas from ensuring that only citizens are registered to vote. This letter therefore comes as no surprise.”

Kobach added that the ACLU is misinterpreting the Supreme Court’s decision, and that the state of Kansas “takes the citizenship qualification seriously and will enforce it.”