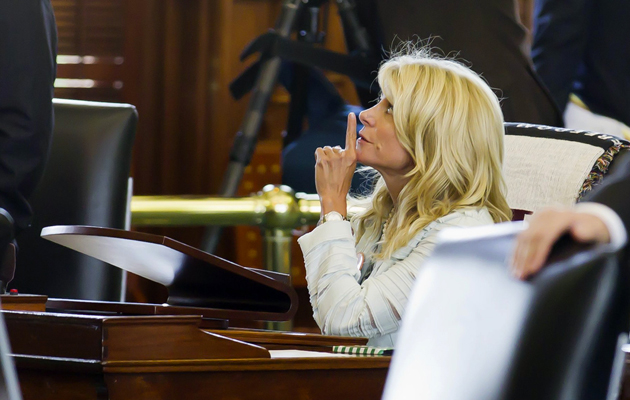 On Monday, the Texas legislature reconvened for a special session for the purposes of passing a strict anti-abortion law that would shut all but five clinics in the state and ban abortions after 20 weeks. Democrats successfully ran out the clock on the legislation in late June, an effort that was capped by state Sen. Wendy Davis’ 11-hour filibuster, but this time around the bill will almost certainly pass. (Move to Texas!) Debate on the bill begins Tuesday, and it’s likely to feature no shortage of overheated statements about Davis, her supporters, and abortion rights. If the last two months of rhetoric from GOP lawmakers and activists is any indication, we just have one bit of advice: Don’t make “Holocaust” your drinking word. Here’s just a small sampling of some of the eyebrow-raising remarks thrown around during the last round of legislative debate:

State Sen. Dan Patrick (R): Defending his party’s chaotic effort to force through a vote as the session was ending, the founder of the state’s tea party caucus told former Arkansas Gov. Mike Huckabee on his radio show that lawmakers had an obligation to ignore proper Senate rules and procedure if it meant saving fetuses: “I spoke to my colleagues and said, when Jesus criticized the Pharisees, he criticized them because their laws and their rules were more important than actually taking care of people. And in my view, stopping a debate to save thousands of lives, well, saving the thousands of lives is more important than our tradition of, well, you should never stop someone.”

Gov. Rick Perry: Speaking to a national right-to-life conference on Friday, Perry lamented that Davis, who was raised by a single mother and had her first child at 19, hadn’t drawn the proper lessons from her own life: “It is just unfortunate that she hasn’t learned from her own example that every life must be given a chance to realize its full potential and that every life matters.”

Lt. Gov. David Dewhurst: After initially telling reporters the bill had passed, Dewhurst later offered up an excuse for why it had failed: “An unruly mob, using Occupy Wall Street tactics, disrupted the Senate from protecting unborn babies.” Following that, he threatened to arrest reporters for interfering with the Democratic process: “If I find, as I’ve been told, examples of the media waving and trying to inflame the crowd, incite them in the direction of a riot, I’m going to take action against them. We have reports that members of the media on the floor, on the floor of the Senate, were looking up at the people in the gallery, waving their hands, trying to motivate them to yell more. If I find examples of that, proof certain on our video. I’m going to address this firmly.”

State Rep. Jodie Laubenberg (R): Laubenberg, the bill’s sponsor, suggested during the floor debate that there was no need to include an exception for victims of rape, because rape kits are themselves a form of abortion: “In the emergency room they have what’s called rape kits, where a woman can get cleaned out. The woman had five months to make that decision, at this point we are looking at a baby that is very far along in its development.”

State Rep. Jonathan Strickland (R): On June 23, as reproductive rights activists were protesting in the capitol, he tweeted:

State Rep. Wayne Christian (R): Stating the obvious in an interview with the Texas Tribune this spring: “Of course it’s a war on birth control, abortion, everything—that’s what family planning is supposed to be about.”

State Rep. Debbie Riddle (R): Posted, and then deleted, this Facebook note: “This is a tough fight—the Gallery is full of orange shirts—very few blue—orange are the ones I call Pro-death. I am Pro-life—so they must be Pro-death. A human is a human prior to birth just as it is human after it is born. We have killed 50 million babies after Roe v Wade. Hitler killed 6 million people.” So at least she’s not a Holocaust denier.

And here’s one bonus from the last time Texas lawmakers took on abortion access, chronicled by Texas Monthly‘s Mimi Swartz:

State Rep. Sid Miller (R): Responding to a question from a female lawmaker as to what his 2011 sonogram bill would actually entail: “Actually, I have never had a sonogram done on me, so I’m not familiar with the exact procedure—on the medical procedure, how that proceeds.” Details!