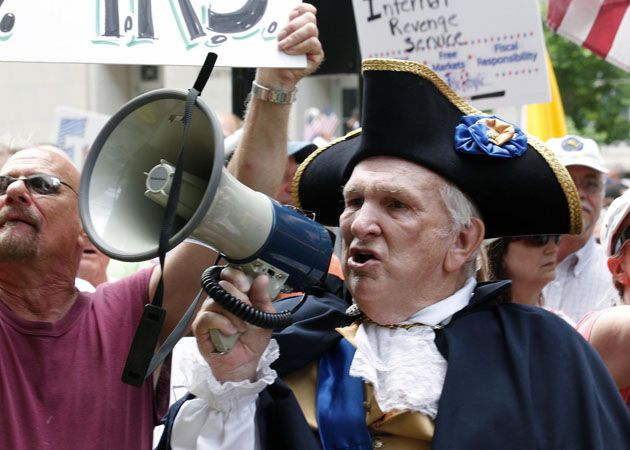 A Member of the Tea Party during a nationwide protest at IRS offices.Ernest Coleman/ZumaPress

The modern Independence Day celebration typically involves things like parades, fireworks, and backyard barbecuing. For the Tea Party Patriots, though, the 4th is a much more solemn occasion, a time for reflecting on all the history that the rest of us tend to gloss over while wilting in the summer heat over the grill. The group has helpfully provided an “Independence Day Tool Kit with detailed instructions on how to celebrate the holiday, tea party-style.

According to the Tea Party Patriots, a proper 4th of July celebration should naturally kick off with the reading of the Declaration of Independence (or, if time is an issue, just the important parts). A prayer might also be in order, and the program outline helpfully advises that “smaller families might want to invite another family to join them.” The extra people are important because the tea partiers recommend that American families spend their day off acting out a play called Unite or Die, whose text on TPP’s website is accompanied by a pattern for making tri-corner hats out of construction paper.

For the kids, TPP recommends “colonial games” including leapfrog and hopscotch. Once they’ve worked up an appetite jumping over each other, the kids might be ready for a colonial refreshment, such as Swamp Yankee Applesauce Cake or 1776 molasses dumplings (recipes included).

TPP’s Independence Day toolkit also includes coloring books for the kids, which illustrate the great sacrifices made by the Founders and educate children on the birth of the nation—at least from the perspective of the National Center for Constitutional Studies. The group was founded by Glenn Beck’s favorite anti-communist Mormon author, the late W. Cleon Skousen, whose work is quoted in an “Independence Day Message” that the toolkit recommends reading to holiday guests. The message conveys a rather different interpretation of the Declaration of Independence than most Americans might have come to understand. In it, for instance, Earl Taylor, the head of NCCS, declares that “Acceptance of the Declaration of Independence is Acceptance of God as Our King,” and that the founding document is a “declaration of our individual belief that God is our one and only King.”

Viewed that way, of course, the 4th of July is no longer a day for fireworks, but a religious holiday, which sort of explains TPP’s rather dour prescriptions for celebrating it. I’m guessing that not many Americans will trade their beer, burgers, and lounge chairs for colonial cakes and a few rounds of leapfrog. But hey, that’s the great thing about living in a free country: The Declaration of Independence means that the tea partiers can tell the rest of us how to celebrate the 4th, and we are free to utterly ignore them.