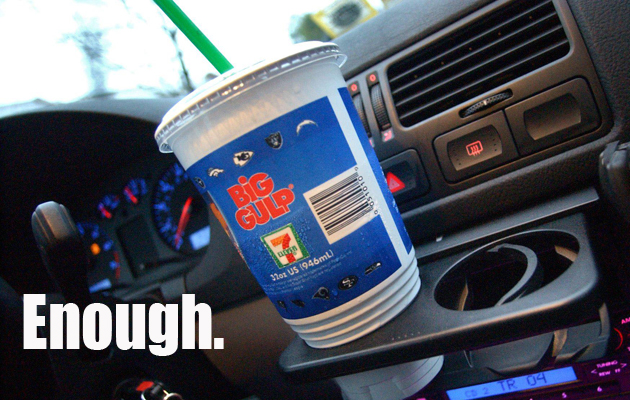 Texas Republican Gov. Rick Perry has spent much of the last year convincing companies to relocate their businesses to the Lone Star State on the promise of low taxes, few regulations, and tens of millions of dollars in incentives (provided he likes your product). First he targeted Californians, prompting Democratic Gov. Jerry Brown to dismiss the ad campaign as a “fart.” Then he traveled to Illinois, where one state business leader likened him to a Roman emperor. His newest target is New York:

According to Perry, the state’s crimes are plain: “Higher taxes, stifling regulations—bureaucrats telling you whether you can even drink a Big Gulp,” he says, referencing Mayor Michael Bloomberg’s scuttled regulations on soda serving sizes. And indeed, Texans feel passionately about their Big Gulps. In 2011, the Austin American-Statesman profiled Paul Sunby, an environmental consultant who was raising awareness of what he had concluded was a creeping reduction in the size of super-huge sodas, from 44 oz. to 40.

Perry is not alone when it comes to Republican politicians and Big Gulps. At the Conservative Political Action conference in March, former Alaska governor Sarah Palin drank from a 7-11 Big Gulp from the stage to demonstrate her party’s commitment to freedom: “Bloomberg is not around, our Big Gulps are safe. We’re cool. Shoot, it’s just pop with low-cal ice-cubes in it.”

In April, Arizona Gov. Jan Brewer posted a Facebook photo of herself sipping a Double Gulp in Manhattan: “After walking around New York City today, I stopped to enjoy a refreshing and extra large Double Gulp from 7 11. Cheers Mayor Mike Bloomberg! #freedom” 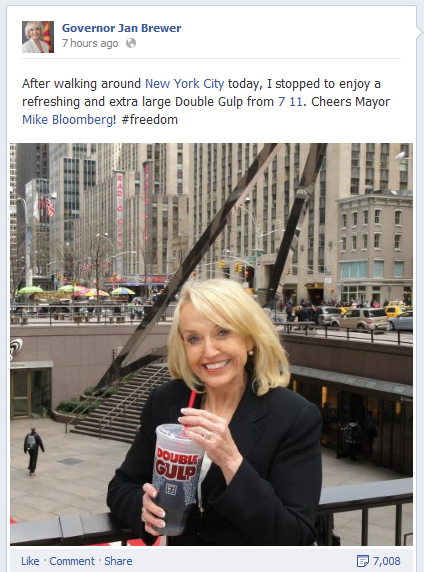 In March Texas Sen. Ted Cruz introduced the “Bloomberg Big Gulp Amendment” to protect the sanctity of super-huge soda. In February, Kentucky Sen. Rand Paul reflected on his visit to New York City in an interview with Sean Hannity: “I was more worried about the Big Gulp—it was a 16 ounce drink and afraid your mayor is going to arrest me.”

Here’s the thing, though: Big Gulps are still perfectly legal. So are regular Gulps, Super Gulps, and Double Big Gulps—which, ironically, are only equivalent to about 1.6 Big Gulps. This is America after all. And they were never banned in the first place, because Bloomberg’s restrictions on the size of soft drinks only applied to certain venues, like movie theaters. You could always buy a Big Gulp, provided you were willing to deal with the consequences of consuming one, which is, let’s face it, kind of gross. Good God, that’s a lot to put your body through just to make a weird political point your staff could have just fact-checked first.

So, invite New Yorkers to move to your state if you want. (Although you might want to deregulate vaginas first.) But for the love of God, stop talking about Big Gulps.