On Tuesday afternoon, the Edward Snowden-loathing hacker who calls himself “The Jester” hacked the website of one of Venezuela’s top newspapers, El Nacional, in order to express his displeasure that the country’s government has offered asylum to the former NSA contractor. In a letter posted on the paper’s website, he asked Venezuela to “reconsider your stance on this small but volatile matter, before weird things start happening.”

The self-described “patriot” hacker, who has one of his computers on display in the International Spy Museum, is famous for launching cyberattacks against WikiLeaks and Al Qaeda-linked web sites. He identifies himself as a former soldier, and he denies working for a US government agency. In recent weeks, he has been busy targeting Snowden’s allies. He has launched successful denial-of-service attacks on the website’s of Bolivian vice president Álvaro García Linera and Venezuelan president Nicolás Maduro. The hacker has vowed to target any country that offers asylum to Snowden, whom he calls “a traitor” who “has jeopardized all our lives.”

On Tuesday, a Russian lawmaker tweeted that Snowden had accepted asylum in Venezuela, but WikiLeaks, which has been assisting the leaker, later denied that he had formally done so. The Jester tweeted out a link to his El Nacional hack at about 4:45 p.m. Eastern time. The Jester did not respond to requests for comment from Mother Jones. It’s not clear why the Jester targeted El Nacional, which in the past has openly opposed former President Hugo Chavez, who hand-picked Nicolás Maduro.

Here’s a screenshot of the Jester’s hack, which appears to be a URL-injection hack, not viewable from the main website without the correct link: 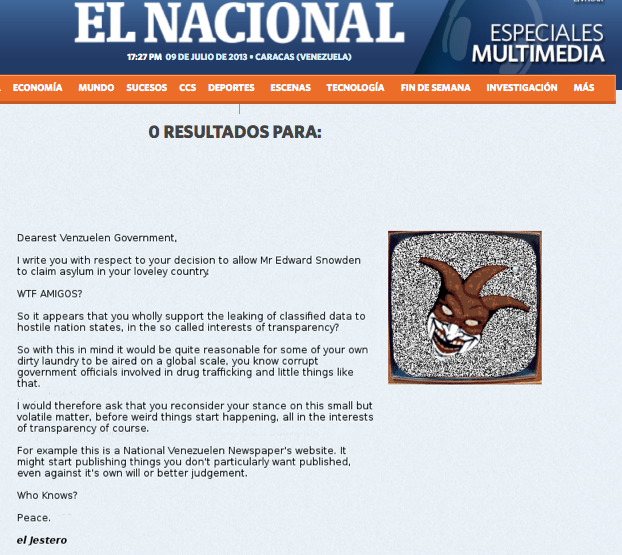