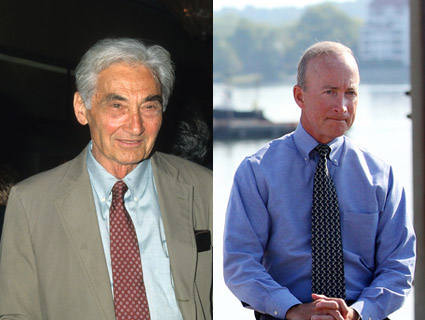 When Mitch Daniels took the helm of Purdue University in January, after eight years as the Republican governor of Indiana, he published an “open letter to the people of Purdue” outlining his vision for the state’s second-largest public college. In his letter, Daniels offered critiques and observations about the state of higher education; on the subject of “Open Inquiry,” he wrote: “A university violates its special mission if it fails to protect free and open debate,” adding that “the ensuring of free expression is paramount.”

Now, some great muckraking by the Associated Press casts serious doubt on Daniels’ commitment to protecting free speech. According to emails obtained by the AP, Daniels as governor tried to ban the works of historian Howard Zinn from the classrooms of Indiana’s public colleges. When Zinn died in February 2010, Daniels wrote in an email: “The terrible anti-American academic has finally passed away.” Daniel described Zinn’s celebrated and widely read book A People’s History of the United States as “a truly execrable, anti-factual piece of disinformation that misstates American history on every page.”

Daniels goes on to write: “Can someone assure me that it is not in use anywhere in Indiana? If it is, how do we get rid of it before more young people are force-fed a totally false version of our history?”

When told the book was being taught at Indiana University in a course on American social movements, Daniel fired back: “This crap should not be accepted for any credit by the state. No student will be better taught because someone sat through this session.”

More from the AP:

“Sounds like we need a cleanup of what is credit-worthy in ‘professional development’ and what is not. Who will take charge,” Daniels replied seven minutes later.

Shane replied that a statewide review “would force to daylight a lot of excrement.”

Just seven minutes later, Daniels signed off on it.

“Go for it. Disqualify propaganda and highlight (if there is any) the more useful offerings. Don’t the ed schools have at least some substantive PD (professional development) courseware to upgrade knowledge of math, science, etc,” Daniels wrote.

Daniels also appeared to have used his position as governor to target an academic who was critical of the state’s education policies. Emails show that Daniels asked for an audit focusing on the work of Charles Little, who is on the faculty of Indiana University Purdue University–Indianapolis’ School of Education and who leads the Indiana Urban Schools Association, an advocate for inner-city students, teachers, and administrators. In an April 11, 2009, email, Daniels asked for greater scrutiny of Little’s program and how it spent it funds.

Reached at his office, Little said he wasn’t surprised that Daniels and his colleagues targeted him. “It is worrisome that some of the people mentioned in the article are still around” in state government, Little told me.

Daniels, for his part, told the AP he had no regrets about his decision to target Howard Zinn. “We must not falsely teach American history in our schools,” he responded. “We have a law requiring state textbook oversight to guard against frauds like Zinn, and it was encouraging to find that no Hoosier school district had inflicted his book on its students.”