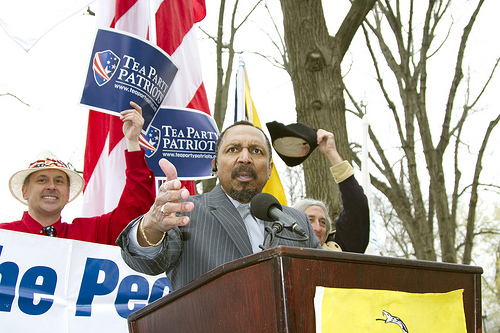 E.W. Jackson, the Republican candidate for lieutenant governor in Virginia, holds awfully extreme views on gay rights and has no qualms about venting them. On his now-dormant personal Twitter feed, as my colleague Tim Murphy pointed out, Jackson frequently aired his hatred toward gays: When President Obama declared June “LGBT Pride Month,” Jackson tweeted, “Well that just makes me feel ikky all over.” In October 2009, he tweeted, “The ‘homosexual religion’ is the most virulent anti-Christian bigotry & hatred I’ve ever seen.” Those kinds of comments put Jackson in step with his running mate, Republican gubernatorial candidate Ken Cuccinelli, a conservative who is as hard-line as they come on social issues.

Yet there is one crusade on which Jackson says he doesn’t intend to join Cuccinelli: banning gay sex.

Buried in a recent National Review profile of Jackson, who is conservative minister, is this paragraph:

After chatting with attendees, Jackson sat down with me for an interview. While his sermon ended with flair and bombast, he was soft-spoken and earnest as I questioned him about how his religious beliefs interact with his political views. Christian values make us free, Jackson told me, and people should live as they see fit as long as they don’t hurt others. While he opposes same-sex marriage, he said he wouldn’t support any sort of ban on gay sex. He also said there shouldn’t be any legal sanction of a religion, and that he would oppose a constitutional amendment naming Christianity as America’s official religion. But that doesn’t mean that our culture isn’t historically Judeo-Christian, he added, and influenced by the Bible. Acknowledging that isn’t an imposition of religion.

The emphasis above is mine. Jackson saying he doesn’t support banning gay sex is a significant break from Cuccinelli. Remember, in 2003 the Supreme Court’s ruling in the Lawrence v. Texas case struck down anti-sodomy laws at the state level. But Virginia kept its gay-sex ban on the books after Lawrence. Then, in March, the US Court of Appeals for the 4th Circuit deemed that Virginia’s anti-sodomy law was unconstitutional. A month later, Cuccinelli, who is Virginia’s attorney general, raised eyebrows when he asked the 4th Circuit to rethink its decision. (Cuccinelli’s office said it was defending the state’s anti-sodomy law to more harshly punish a 47-year-old man who solicited oral sex from teenagers. Here’s why that is a problematic response.)

Cuccinelli explained his opposition to gay sex in 2009: “My view is that homosexual acts, not homosexuality, but homosexual acts are wrong. They’re intrinsically wrong. And I think in a natural law-based country it’s appropriate to have policies that reflect that…They don’t comport with natural law.” This is a long-running fight for Cuccinelli. As far back as 2004, when he was a Virginia state senator, he warned of a plot by the LGBT community to “dismantle sodomy laws” and “get education about homosexuals and AIDS in public schools.”

On this issue, though, Cuccinelli and his running mate appear to see things differently. Ken, you might want to call your office.