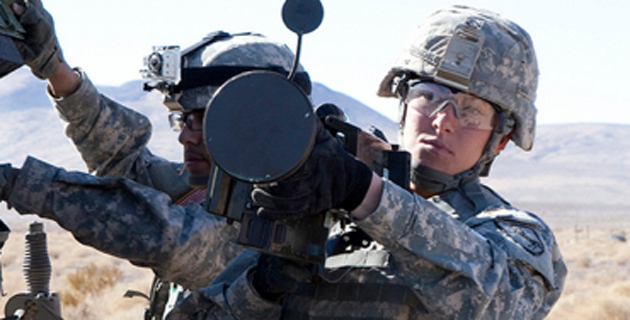 On Tuesday, the Pentagon is expected to announce that women will be allowed train for and potentially serve in elite combat positions in the US military, including the Army Rangers, Navy SEALs, and other special ops forces. (In January, then Secretary of Defense Leon Panetta lifted a ban on women serving in combat roles, which made women eligible for another 238,000 jobs in the military.) According to details of the proposals obtained by the Associated Press, women will be able to train for the Army Rangers by mid-2015 and for the Navy SEALs in 2016 if senior leaders sign on. The AP reports:

[The plan will] call for requiring women and men to meet the same physical and mental standards to qualify for certain infantry, armor, commando and other front-line positions across the Army, Navy, Air Force and Marines. Defense Secretary Chuck Hagel reviewed the plans and has ordered the services to move ahead…Military leaders have suggested [to Hagel] bringing senior women from the officer and enlisted ranks into special forces units first to ensure that younger, lower-ranking women have a support system to help them get through the transition…U.S. Special Operations Command is coordinating the matter of what commando jobs could be opened to women, what exceptions might be requested and when the transition would take place.

The proposals leave some wiggle room for continued exclusion of women from certain roles if future studies indicate that women would somehow be significantly less equipped for these positions. The services would, however, have to defend the continued exclusion to top Pentagon officials, and common sense and the success of women already serving in tough jobs in the US military have long discredited such arguments.

News of this proposal comes after a series of stories in recent months highlighting the startlingly high number of sexual assaults and incidents of harassment in the US armed forces. In January, Gen. Martin Dempsey, chairman of the Joint Chiefs of Staff, said in a press conference that he was convinced that rampant sexual misconduct in the ranks exists partly because women have been so long subordinated to men in American military culture, and hadn’t been permitted to serve officially in military combat roles including special operations forces. “It’s because we’ve had separate classes of military personnel,” Dempsey said. “The more we can treat people equally, the more likely they are to treat each other equally.”