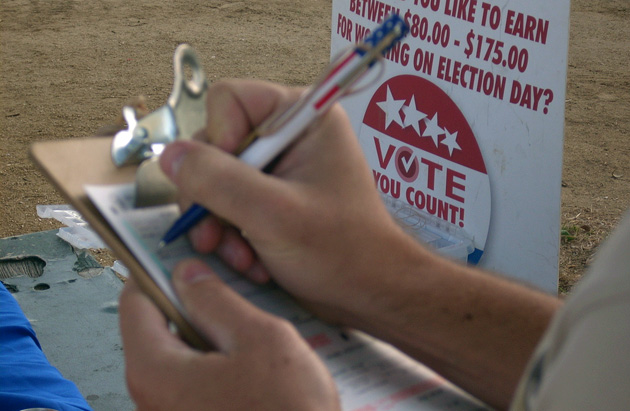 Voter registration efforts got a little easier in Arizona Monday, but it may not last forever. <a href="http://www.flickr.com/photos/ynplaycity/2930883044/sizes/l/in/photostream/">YN Play City</a>/Flickr

The US Supreme Court on Monday struck down an Arizona law that required people to provide proof of citizenship when registering to vote. The case, Arizona v. The Inter Tribal Council of Arizona, concerned Arizona’s Proposition 200, which was passed by voters in 2004 during the fight over President George W. Bush’s immigration reform proposal. The now-defunct law required new voters to prove that they’re citizens during the voter registration process. That proof could be in the form of a driver’s license number, a copy of a birth certificate, a copy of a passport, copies of naturalization documents, a Bureau of Indian Affairs card number, a tribal treaty card number, or a tribal enrollment number.

Unfortunately, millions of US citizens—mostly poor and elderly people—lack documentary evidence of their citizenship. Because of that, thousands of US citizens who should otherwise have been able to vote—31,000, according to the American Civil Liberties Union—were denied access to the ballot box under Proposition 200.

The National Voter Registration Act of 1993 requires only that potential voters check a box on a form attesting that they are citizens and eligible to vote. During oral arguments before the high court in March, the groups challenging Proposition 200 said that the federal voter registration law and the stricter Arizona law were incompatible, and the federal statute should take precedence. Arizona Attorney General Tom Horne, defending Proposition 200, said the federal requirement was “essentially an honor system” and that the two laws should be allowed to coexist. The Supreme Court decided the anti-Proposition 200 forces were right, and the federal law trumped Arizona’s.

But voting rights advocates aren’t out of the woods yet. At SCOTUSblog, Lyle Denniston notes that although the justices ruled that the state’s requirements were out of line with federal election law, states that want to require potential voters to provide proof of citizenship may still be able to convince the Election Assistance Commission or Congress to implement such a requirement. The court also said that states could claim they had a constitutional right to require proof of citizenship for voter registration—an argument Arizona did not make in this particular case. In other words, there’s a strong chance that Arizona or any other state that wants to could eventually get strict proof-of-citizenship requirements into law.

“The opinion seemed to leave little doubt that, if Arizona or another state went to court to try to establish such a constitutional power, it might well get a very sympathetic hearing, because that part of [Justice Antonin Scalia’s] opinion laid a very heavy stress on the power of states under the Constitution to decide who gets to vote,” Denniston wrote.