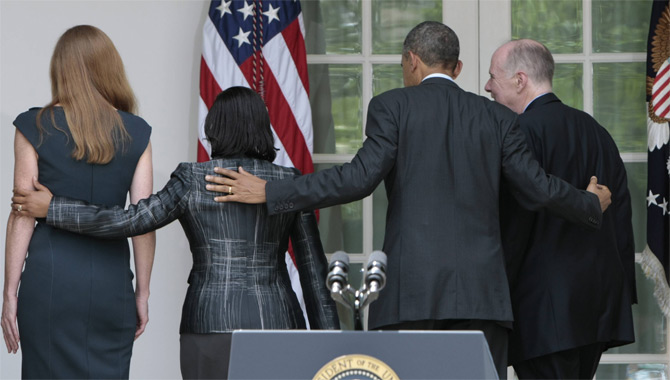 Samantha Power, Obama’s UN ambassador-in-waiting, frowned modestly as the president heaped lofty praise on her this week when he announced a major national security reshuffle.

“One of our foremost thinkers on foreign policy, she showed us that the international community has a moral responsibility and a profound interest in resolving conflicts and defending human dignity,” he said. “I think she won the Pulitzer Prize at the age of 15 or 16,” he joked. (Power won in 2003, in her early 30s, for A Problem from Hell: America and the Age of Genocide, a rationale for American intervention in international atrocities.)

In accepting the president’s nomination—the Senate still needs to approve—Power argued for a strong American role in the UN: “As the most powerful and inspiring country on this Earth, we have a critical role to play in insisting that the institution meet the necessities of our time. It can do so only with American leadership.”

But will Samantha Power’s brand of leadership extend to advocating climate action from her powerful position at the UN? After all, climate change is a top priority in the UN: While development has been grinding, members at the Doha climate conference last December reaffirmed a previous decision to reach a global pact to replace Kyoto by 2015; secretary general Ban Ki-moon himself has listed climate change at the very top of his 2013 “to do” list (up there with stopping the bloodshed in Syria). By contrast, there’s very little evidence that climate change has motivated Samantha Power’s career or featured in her public comments, leaving foreign policy experts confused as to how she might rise to the challenge. The people in the know…don’t know.

“I don’t think she has ever illustrated particular views one way or another on the environment,” said a former colleague of Power’s.

“I don’t think she has ever illustrated particular views one way or another on the environment,” said former colleague Robert Stavins, an expert on environmental economics at Harvard’s Kennedy School of Government.

“I don’t think we have any information,” said Joshua W. Busby, at the Robert S. Strauss Center for International Security and Law. On climate change, “I didn’t find anything she’s ever said.”

What clues we do have lie in her critique of the United Nations. She told a 2004 audience at Harvard—where she was also a professor—that the UN was as marred by international distrust and suspicion as the US was, making international relief and intervention in humanitarian disasters tricky. “The guardian of international law legitimacy is itself seen to be something of a relic,” she said. What is needed, she argued, was a reinvestment in the UN. This would make the UN, once again, a body through which the US expressed foreign policy, in order to start “restoring the legitimacy of US power.”

In a 2008 interview with Harry Kreisler of the University of California-Berkeley’s Institute of International Studies, Power appeared to group climate change with other insanely difficult global problems like nuclear proliferation and terrorism. All, she said, require negotiations between many nations, rich and poor, that all want totally different things. The US can’t simply snap its fingers and get what it wants, she argued. Collaboration is key: “What’s important is to embrace the recognition that you need others by your side in order to get anything done.”

Another clue to Power’s stance on global warming: She admires the Brazilian-born United Nations worker Sergio Vieira de Mello. In her book Chasing the Flame, Power notes that Vieira de Mello foresaw an effective UN not only using its powers to “deepen and broaden the rules governing international and internal state practices on such vital concerns as global warming,” but also embracing alternative arrangements, like regional partnerships and working with NGOs, not as competitors, but as partners.

I found one other tiny insight in Power’s account of her first big conversation with her future boss, Senator Barack Obama, as told to The Nation. “He really pushed me…He’s very aware of the tectonic plate shifts in the global order—the rise of China, the resurgence of Russia, the loss of influence by the US—and how those affect your ability to get what you want, on anything from global warming to getting out of Iraq to stopping genocide.”

In the absence of other evidence of her approach to climate change—I approached the White House to comment directly on her climate record for this article—experts have suggested looking at her husband, Cass Sunstein, who has written a lot about climate change and America’s need to act, and Secretary of State John Kerry, for whom climate change is a major priority, and who will no doubt help set a lot of Power’s agenda through the State Department.

But these little hints are few and far between. In the end, Power’s appointment seems to put other concerns above climate, says Busby. “They may have higher priority items, like what to do in Syria, that they are thinking about.” And in the end, orders will come from the top, says Stavins: “Whether or not climate change is a priority for her, I assume, will depend on the White House.”