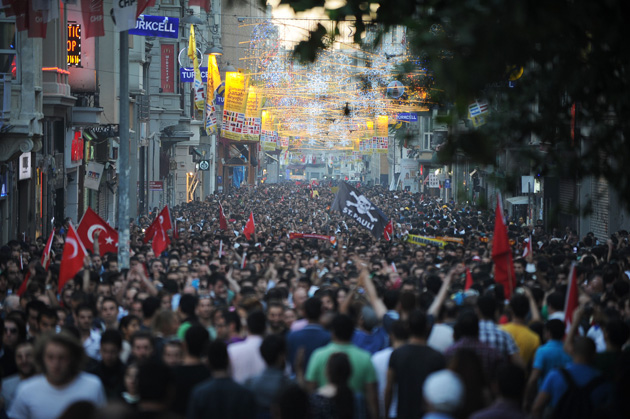 Protesters flock to the Taksim Square during a protest in Istanbul on Saturday, June 1.Lu Zhe/Xinhua/Zuma

Click here to go directly to the latest updates.

Turkey is experiencing its largest and most violent riots in decades as tens of thousands of young people voice opposition to the moderate Islamist government of Prime Minister Recep Tayyip Erdogan. Thousands of protesters have been injured as authorities have sought to disperse demonstrators with tear gas, water canons, beatings, and a tightening grip on the media. On Monday, Erdogan accused the protesters of “walking arm-in-arm with terrorism.” Yet his defiant response is only making the crowds larger. In an echo of the Arab Spring and the Occupy Wall Street protests of 2011, the movement has been galvanized by images disseminated on social media, such as a picture of a policeman spraying tear gas at a young woman in a red summer dress, her long hair swept upward by the blast. “The more they spray,” reads a popular Twitter caption, “the bigger we get.”

Why are people protesting? Nominally, the protests were sparked by a government plan to replace Istanbul’s leafy Taksim Gezi Park with a touristy shopping mall—what the country’s leading historian, Edhem Eldem, sardonically derides as a “Las Vegas of Ottoman splendor.” Trees are especially precious in Istanbul, where only 1.5 percent of land is green space (compared to 17 percent in New York). But the protests quickly became symbolic of much broader concerns about Erdogan’s autocratic and socially conservative style of government.

Istanbul’s secularists chafe at the way he has rammed through development projects in this cosmopolitan cultural crossroads with little regard for the European and non-Muslim aspects of its history; a 19th-century Russian Orthodox Church may be destroyed as part of an overhaul of a port. What’s more, Erdogan has placed new restrictions on the sale of alcohol and availability of birth control. And he has jailed political opponents and members of the media.

How widespread are the protests? Since Friday, there have been demonstrations in 67 of Turkey’s 80 provinces, according to Turkey’s semi-official Andalou News Agency. At least 1700 people have been arrested.

What about damage and injuries? Photos show fires in the street and overturned and burned-out cars. Two protesters have been killed, one from a bullet fired from a police vehicle, reports Turkey’s Halk TV. According to CNN, at least 115 security officers have been injured. On Tuesday, the Turkish Doctor’s Association told Reuters than some 3,000 people have suffered minor injuries such as lacerations and difficulty breathing due to exposure to tear gas. Four people remain hospitalized in critical condition.

Is Erdogan just another Islamist dictator? Not according to Washington, which holds up Turkey as a shining model for democracy in the Islamic world. Since coming to power in 2002, Erdogan’s Justice and Development Party (AKP) has twice returned to office with large pluralities of the vote. In recent years, Erdogan has kept up the pace of democratic reforms in Turkey by enshrining individual rights in its laws and placing the military under civilian control. “Yet even as the AKP was winning elections at home and plaudits from abroad,” writes Foreign Policy‘s Steven Cook, “an authoritarian turn was underway…”

In 2007, the party seized upon a plot in which elements of Turkey’s so-called deep state—military officers, intelligence operatives, and criminal underworld—sought to overthrow the government and used it to silence its critics. Since then, Turkey has become a country where journalists are routinely jailed on questionable grounds, the machinery of the state has been used against private business concerns because their owners disagree with the government, and freedom of expression in all its forms is under pressure.

How bad is the crackdown on the press? Pretty bad. At the same time CNN International was broadcasting live from Taksim Square on Friday, CNN Turk, the network’s Turkish-language affiliate, was showing a cooking show and a documentary about penguins. 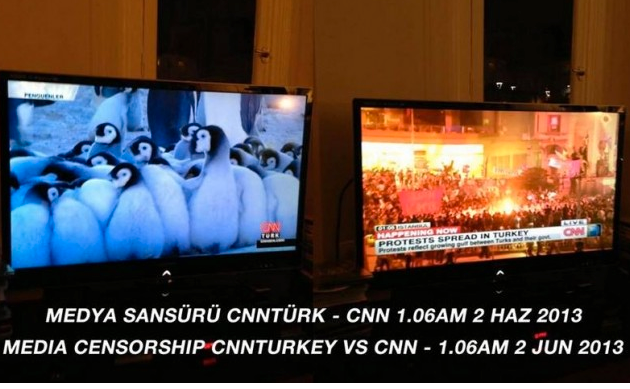 In 2009, Turkey’s tax ministry levied a whopping $2.5-billion fine against CNN Turk’s parent company, Dogan Yayin, in a move that was widely viewed as punishment for its critical coverage of the government. Some journalists who’ve written negative stories about the government and its allies have been fired or imprisoned. See this year-old CNN report on retaliation by the Turkish government:

So how are people in Turkey learning about the protests? Mostly through social media. “Revolution will not be televised; it will be tweeted,” reads a popular Istanbul graffiti scrawl. According to an analysis by NYU’s Social Media and Political Participation Lab, the Twitter hashtag #direngezipark had been used in more than 1.8 million tweets as of this morning—far more than the Egyptian hashtag #Jan25 was used during the entire Arab Spring uprising. And about 85 percent of those tweets that are geocoded have come from within Turkey. 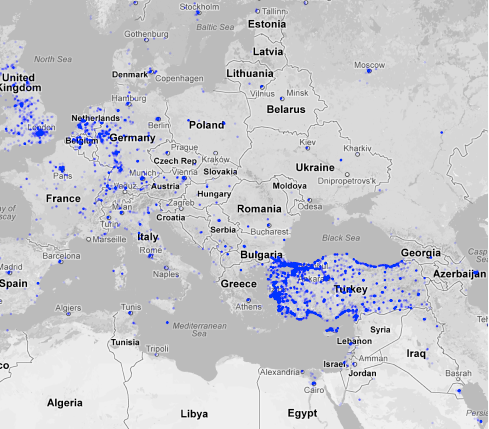 Here’s a taste of what people are sharing:

The picture of the dervish protester in a gas-mask is already iconic. #occupygezi twitter.com/YiannisBab/sta…

@unmedialiaison POLICE BRUTALITY GOES ON IN IZMIR&ANKARA RIGHT NW! HELP US GET THE WORD OUT! twitter.com/OccupyJapan12/… #occupygezi

Facebook has also emerged as a major source of viral Turkey content as citizen journalists use it to post videos of violent protest scenes. The Daily Dot‘s Joe Kloc has compiled some of the most widely shared street scenes:

A tear-gassed protester getting brutally kicked and beaten by police:

This morning, Erdogan called social media “the worst menace to society,” saying it has been used to spread lies about the protests and the government’s response. That’s probably not the best way to look like you care about what the protesters are saying.

What do hackers think about this? Over the weekend, Anonymous launched #OpTurkey, an anti-government hacking and DDoSing operation that resembles its work in Egypt and other countries during the Arab Spring. It has also given activists tools to skirt government internet censorship.

So is this the next wave of the Arab Spring? Not exactly. For one thing, most Turks are not “Arabs,” and they don’t necessarily view their nationality through an ethnic or religious lens. Compared to Tunisia, Egypt, Libya, or Syria, Turkey is much more Western-oriented, stable, prosperous, and egalitarian. From 2002 to 2011, the Turkish economy tripled in size. Per capita income in Turkey is $15,000 (compared to $6,600 in Egypt), and income inequality is less pronounced than it is in the United States. For now, at least, the protests seem less likely to spark a revolution than simply pull the rug out from Ergodan’s political agenda and electoral prospects. That said, Turkey’s last coup was just a little more than 30 years ago. The power dynamic could change quickly if Ergodan overreacts.

Who do I follow for more news about the protests? The blog What Is Happening in Istanbul has been rolling out updates. The leading Twitter hashtags are #direngezipark and #occupygezi. Also, follow New Yorker writer and native Turk Elif Batuman, who will doubtless write something amazing. And the Guardian is live-blogging the protests. Check back here for updates.

UPDATE 6/3/2013 5:15 p.m. ET: During a press briefing on the Turkey protests today, White House spokesman Jay Carney voiced “serious concerns” about the violent crackdown on protesters, whom he characterized as mostly “peaceful, law-abiding citizens exercising their rights.” That’s a far cry from how they’ve been painted by Erdogan.

UPDATE 6/3/2013 5:55 p.m. ET: Using a crowd-funding website, Turkish protestors have raised enough money to publish this letter to Erdogan as a full-page ad in the New York Times.

UPDATE 6/3/2013 6:54 p.m. ET: Turkish media is reporting that 22-year-old Abdullah Comert, a member of the opposition Republican People’s Party, died tonight in Ankara of wounds to the head. Turkey’s Star Gazette reports that security forces are investigating the incident. Activists on Twitter immediately blamed police for the shooting, which, if true, would mark the first instance of security forces killing an #occupygezi protestor. However, the allegation hasn’t been independently confirmed.

UPDATE 6/4/2013 1:41 p.m. ET: Comert was struck in the head by at least one of four bullets fired from a police vehicle, the New York Times reports, citing a story from the Turkish web channel Halk TV. Protests over Comert’s death were set to take place in Ankara today.

UPDATE 6/4/2013 2:34 p.m. ET: The Guardian‘s Elif Shafak has more context on what’s fueling the protests. “Turkey lacks a solid, sophisticated opposition party,” she writes. “This remains a fundamental deficiency, as people do not have alternative political venues to channel their views and frustrations. That which cannot be expressed accumulates and seethes inside, only to erupt where and when it can.”

Shafak cites other religiously motivated government policies that rankle the secularists. In the Ankara subway, signs warned passengers against kissing in public. Other observers have cited the debate over lifting a ban on headscrarves in public schools and buildings (Erdogan’s wife wears one). Some Istanbulites jokingly call these women “ninjas.”

And then there’s the bridge. “The government has chosen to name the third Bosphorus bridge after Yavuz Sultan Selim, the Ottoman sultan, nicknamed Selim the Grim, famous for his massacres of the Alevi minority as part of his war against Shia Iran in the early 16th century,” Shafak writes. Modern day Alevis aren’t happy about this. Booming Istanbul may be young and cosmopolitan, but history in this old imperial town still matters.

UPDATE 6/4/2013 6:20 p.m. ET: Turkey’s rival football fans have joined forces to protest against the government. If you want to know why this is a really big deal, read Elif Batuman’s New Yorker piece about feuding Turkish football hooligans.

UPDATE 6/4/2013 6:40 p.m. ET: It now appears that Turkish authorities are targeting activists based upon their statements on social media. From Bloomberg‘s Turkey bureau chief Banjamin Harvey: 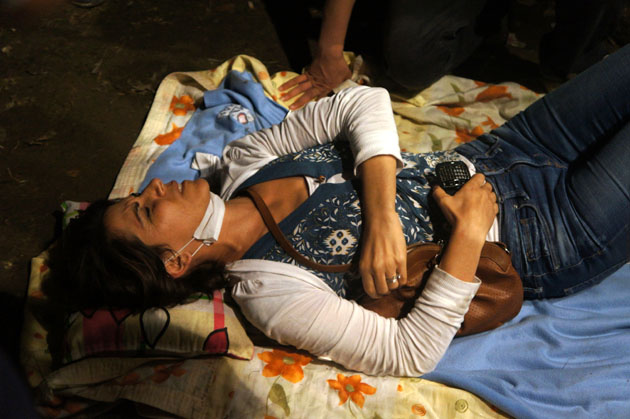 For more photos from the front lines of the protests by Delaney Nolan, a writer living in Istanbul, click here.

UPDATE 6/5/2013 7:19 a.m. ET: Activists and protesters in Turkey called for the dismissal of police chiefs in Ankara, Istanbul, and other cities due to police forces’ response (water cannons, tear gas, smoke grenades, etc.) to the protests. The group of protesters also rejected the apology delivered by Turkey’s Deputy Prime Minister Bulent Arenc, who had apologized at a news conference on Tuesday for “excessive violence” by police.

UPDATE 6/5/2013 5:04 p.m. ET: Turkish officials are angry at their counterparts in the U.S. for criticizing the Turkish response to the protests. “Turkey is not a second-class democracy,” Turkish foreign minister Ahmet Davutoglu told Secretary of State John Kerry on Tuesday, according to Al Jazeera. The foreign minister told Kerry that the protests were not “extraordinary,” comparing them to the Occupy Wall Street demonstrations of 2011. 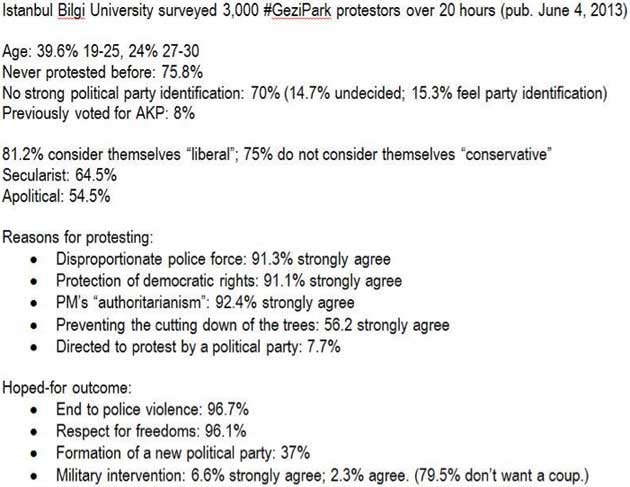 UPDATE 6/5/2013 5:38 p.m. ET: The heavy-handed response to the protests continued today. In the Turkish capital of Ankara, police cleared a large crowd with water canons and tear gas. The confrontation begins around a 1:20 in this video:

Call the Police – the wild protesters doing yoga at Gezi Parki are back! #occupygezi #direngeziparki twitter.com/57UN/status/34… (via @57un)