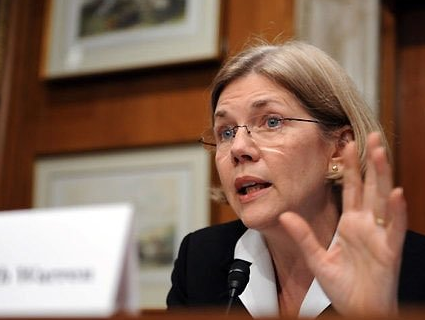 On Monday, Sen. Elizabeth Warren (D-Mass.), demanded that Ed DeMarco, the head of the Federal Housing Finance Agency (FHFA), justify why his government agency is supporting the super-high-interest rate private students loans that are drowning many Americans in debt.

For the past few years, one of the Federal Home Loan Banks that DeMarco’s agency oversees has been funding Sallie Mae, the largest provider of private student loans in the country. Warren wants DeMarco to explain why.

The Federal Home Loan Banks were “intended to bolster the banks’ support for the housing market—not to be a backdoor way to subsidize highly-profitable private student lenders,” Warren wrote in a letter to DeMarco sent Monday. “It is deeply worrisome that the Federal Home Loan Banks may be undermining their mission by extending billions of dollars in cheap credit to private student lenders.”

Sallie Mae has an $8.5 billion credit line from one of the FHL Banks at an interest rate between 0.23 and 0.34 percent. But Sallie Mae charges students taking out loans a rate that is 25 to 40 times higher. Sallie Mae “was able to borrow at less than one-quarter of one percent interest because the government’s sponsorship of the Federal Home Loan Banks allows them extraordinarily cheap access to capital,” and yet took in about $2.5 billion in student loan interest last year, Warren noted.

In the letter, Warren asked for documentation detailing FHL banks’ funding of Sallie Mae and other private student lenders, and any analysis the FHFA has on the impact of student debt on homeownership. (A Consumer Financial Protection Bureau report found that student loan debt is a huge barrier for Americans trying to buy their first homes.)

Total student loan debt in this country currently stands at close to $1 trillion. Most of that is federal student loan debt, not private, which means those loans have lower interest rates. But that may change soon; student loan interest rates are scheduled to increase from 3.4 percent to 6.8 percent on July 1. Members of Congress—including Warren—and the president have come up with a bunch of different schemes to avoid that interest-rate jump; Warren’s year-long fix would give students the same close-to-zero rate that banks pay to the Federal Reserve for short term loans. But no deal is nigh.