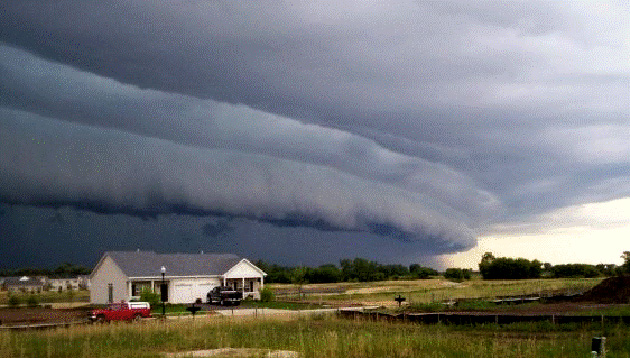 A derecho gathered outside Chicago in 2008. <a href="http://www.spc.noaa.gov/misc/AbtDerechos/derechofacts.htm#whatsnew">NOAA/Courtesy of Brittney Misialek</a>

You’ve probably heard that a massive system of storms is currently bearing down on the Midwest and expected to reach the mid-Atlantic on Thursday. Meteorologists are warning that the storms may turn into derechos, or “land hurricanes.” Almost 75 million people are in the path of the storms, and forecasters believe that conditions are favorable for one or more derechos this week. So what can we expect from these intense storms?

What is a derecho? According to NOAA, a derecho is a “widespread, long-lived windstorm that is associated with a band of rapidly moving showers or thunderstorms.” In order for a weather event to be classified as a derecho, the wind damage zone must extend more than 240 miles and include wind gusts of at least 58 miles per hour. In “super-derechos”, wind gusts can top 100 miles per hour.  “You can think of a derecho as a tropical cyclone over land,” NOAA research meteorologist Ken Pryor told Discovery News. “The impacts are very similar. There are damaging winds that cover a significant area.” The storms are known to occur frequently at night, and they often bring hail, flooding, and tornadoes.

Is it like a tornado? Not exactly. The two types of storms can occur in the same system, but the damage of a derecho is directed along a fairly straight path and tornadoes are more isolated events. “A tornado, when it does occur, may be on the magnitude of a mile or two wide; a derecho could go for hundreds of miles producing significant damage,” Jim Keeney, weather program manager at the national weather service’s office in Kansas City, Mo., told CBS.

What causes it? Derechos are associated with showers and thunderstorms where there are strong outflow winds that “move preferentially in one direction,” and are the products of downbursts, according to NOAA. “Imagine taking a water balloon and dropping it, where you see the balloon break and splatter on the ground. That’s basically how a downburst works,” Pryor told NBC News. “And you can think of a derecho as a large cluster of those downbursts all happening simultaneously.” 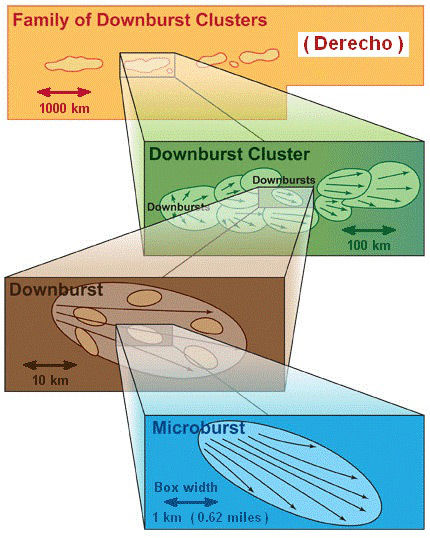 When and where do they usually occur? They are most common in late spring and summer with more than 75 percent occurring between April and August. Check out this handy NOAA map below to see how frequently they hit different regions: 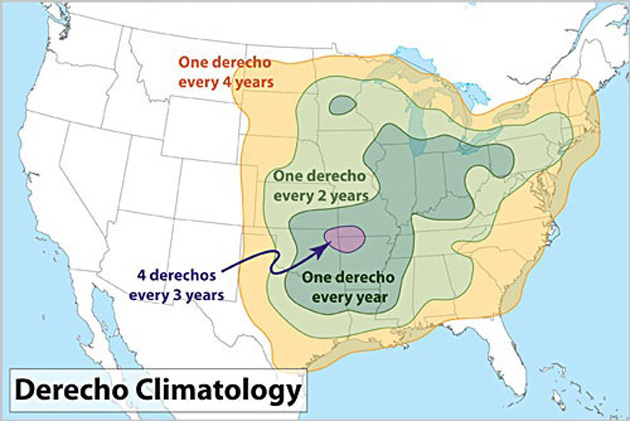 When was the last one? A particularly destructive derecho causing $1 billion in damage hit a 700-mile swath between the Ohio Valley and the mid-Atlantic last June. Five million people from Chicago to the mid-Atlantic coast lost power, and 22 were killed. NOAA has documented 26 noteworthy derechos since the late 1960s. Below is a diagram of one that hit Kansas, Oklahoma, and Texas in 2001: 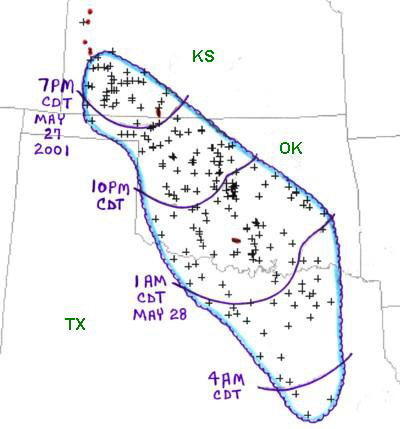 Area affected by the May 27-28, 2001 derecho (outlined in blue). Curved purple lines represent the approximate locations of the gust front at three-hourly intervals. “+” symbols indicate the locations of wind damage or wind gusts (measured or estimated) above severe limits (58 mph or greater). Red dots and lines denote tornadoes. NOAA

Is climate change involved? According to NOAA, “Some of the most intense summer derechos, especially those of the progressive type, occur on the fringes of extreme heat waves.” After last year’s deadly derecho, some wondered if climate change caused or intensified it:

Since climate change can boost the odds of major heat waves such as this one, and the extreme heat contributed to the severe weather, it’s plausible—albeit rather speculative at this point—that climate change played some sort of role in the derecho event. However, it will require rigorous scientific analysis to determine whether this may have been the case.