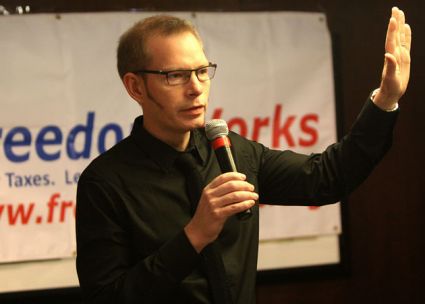 In the latest sign of turmoil at FreedomWorks, two prominent board members have resigned following the completion of an investigation they launched into possible misconduct within the conservative group, which has been an instrumental force in the tea party movement.

In December, these two board members, James Burnley IV and C. Boyden Gray, sent a letter to FreedomWorks president Matt Kibbe informing him that they had received “allegations of wrongdoing by the organization or its employees.” They noted they had retained two attorneys, Alfred Regnery and David Martin, to conduct an independent investigation into the accusations. Burnley and Gray, both of them high-profile veterans of Republican administrations, ordered Kibbe to cooperate with the lawyers, to ensure that no records were “destroyed, deleted, modified or otherwise tampered with” and to send Regnery a check for $25,000 to cover his initial fees. The investigation followed several months of conflict inside the group that included the surprise resignation of FreedomWorks’ longtime chairman, Dick Armey, a former Republican congressman and onetime House majority leader. Armey accused Kibbe of improperly using FreedomWorks resources to promote a book Kibbe had written.

After the investigation was launched, Kibbe penned a private memo—titled “Republican Insiders Attempt Hostile Takeover of FreedomWorks”—accusing Armey, Burnley, and Gray of being shills for the Republican establishment and undercutting the group’s standing as an independent, nonpartisan, conservative organization. Kibbe maintained they were trying to punish him for defying their supposed effort to steer FreedomWorks into the conventional Republican fold. He claimed that the divisive fight within FreedomWorks was not really about his book contract or other organizational matters; it was about politics and control of a key right-wing resource.

<>The battle inside FreedomWorks produced bizarre tales of internal clashes and odd political intrigue. There was the story that Armey—who received an $8 million payout from a FreedomWorks board member to ease his departure—had shown up at the group’s offices with a gun-wielding assistant to confront Kibbe and Adam Brandon, the organization’s senior vice president. Armey maintained that this tale was hyped up by his FreedomWorks foes and that he had arrived at the office with a former Capitol Hill cop who had been volunteering his security services to Armey and FreedomWorks for years. In February, Mother Jones broke the news that FreedomWorks produced a promotional video last year that included a scene in which a female intern wearing a panda suit simulated performing oral sex on another intern who was wearing a Hillary Clinton mask. (The video was spiked after several staffers complained.) Former FreedomWorks officials have said that the place was in tumult, with employees departing or looking to leave.

The investigation launched by Burnley and Gray—which covered Kibbe’s book deals and other matters—divided the organization and its board into opposing camps, according to former FreedomWorks officials. Several board members, these sources say, sided with Kibbe and urged staffers to view the probe as a hostile act the organization could beat back. Key board members allying themselves with Kibbe—as opposed to Burnley and Gray—included Robert T.E. Lansing, chairman of the Westminster Funds, a real estate partnership; Frank Sands, founder of Sands Capital Management; and Mary Albaugh, who is listed on FreedomWorks’ website without any identifying information. Albaugh, though, is better known in Washington as Betsy Fisher, the owner of a high-end and popular woman’s clothing store that bears her name and that is visited by prominent DC shoppers. She did not respond to a request for comment.

Board members backing Kibbe conducted their own interviews of FreedomWorks staffers and reported what these staffers said to Kibbe, according to a former FreedomWorks official, who notes this had “a chilling effect” and undermined the probe initiated by Burnley and Gray.

Burnley confirmed in an email that he and Gray resigned. But he wouldn’t comment further, noting, “Sorry, but I remain mute.” Gray did not respond to a request for comment. Both men are pillars of Washington’s Republican community. Burnley was secretary of transportation for President Ronald Reagan. He has advised the presidential campaigns of John McCain, Bob Dole, and Elizabeth Dole. Gray was White House counsel for President George H.W. Bush and US ambassador to the European Union in the George W. Bush administration. With Armey, he co-chaired the libertarian-minded Citizens for a Sound Economy, which was funded partly by the Koch brothers, the conservative billionaires. Burnley was a board member of this group, and Kibbe was its president. (About a decade ago, CSE merged with another conservative outfit to form FreedomWorks.)

Kibbe, Brandon, and FreedomWorks spokeswoman Jackie Bodnar did not respond to requests for comment.

The results of the probe Burnley and Gray launched have not been made public. A former FreedomWorks official says that the investigation was “limited and frustrating.” But with the apparent end of this investigation and the departure of Burnley and Gray, it could be that the civil war within FreedomWorks is over, with Kibbe, as of now, retaining managerial control of the outfit. Still, this former official says, FreedomWorks—which last year raised $41 million and achieved only limited results in the election—remains “an unhappy place. Good people are leaving. They are having fundraising woes.”