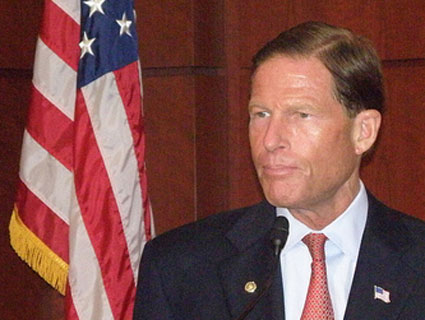 Lawmakers and the families of Newtown victims held a midday press conference on Capitol Hill Thursday—the day before the six-month anniversary of the Newtown shooting—part of a renewed, day-long effort to revive the Senate’s failed gun background check legislation. Connecticut Sen. Richard Blumenthal, a Democrat and key advocate for the victims during the gun debate, vowed to defeat the “schoolyard bullies” of the National Rifle Association in that effort, but he was less certain about whether to inject gun control into the ongoing immigration reform debate.

“I’m not going to doom or cripple immigration reform efforts to raise those amendments,” Blumenthal told Mother Jones after Thursday’s conference, echoing similar comments he made earlier this week. But, he added, “The issue of gun violence belongs in the debate.” In other words, Blumenthal won’t doom immigration reform—but he might.

Senate Majority Leader Harry Reid (D-Nev.), who controls the amendment process, is in discussions with Sen. Mitch McConnell (R-Ky.), the minority leader, to determine which measures will get a vote. McConnell told Mother Jones Thursday that there is “nothing new” yet on which amendments will get floor time. Blumenthal said he is still discussing his amendments with Senate leadership and other colleagues to determine if they would be receptive.

At the press conference, Democrats claimed a renewed fight over background checks is possible. Reid said that he would reintroduce a background check bill in the Senate once he secures 60 votes in order to overcome a filibuster, claiming he has made progress with a couple Republicans. “The writing is on the wall,” Reid said. “Background checks will pass the United States Senate, it’s just a matter of time.”