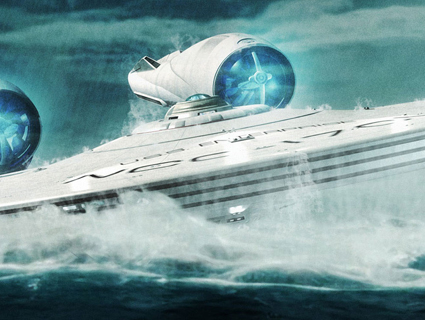 On April 24, 2005, US Marine Corps lance corporal Adam McCann was on patrol with his fire team, as he had been on many other occasions. His team was inspecting a weapons cache discovered in the city of H?t in Iraq’s Al-Anbar province. As they prepared to head back to base, they were met with a hail of mortar fire launched from the other side of street. The entire team was injured, and McCann sustained shrapnel wounds to his neck and both legs. But all escaped with their lives.

“Seeing my name in the movie credits was pretty nice,” McCann says. “And the after-party was pretty amazing.”

Eight years later, on May 14, McCann, who is now 27, attended the star-studded Los Angeles premiere of Star Trek Into Darkness—in which he plays a minor role. “Seeing my name in the movie credits was pretty nice,” McCann told me. “And the after-party was pretty amazing as well.”

McCann is one of four post-9/11 American war veterans featured in the new film as the “Starfleet Ceremonial Guard.” (The others are Melissa Steinman of the Coast Guard, Eric Greitens of the Navy, and Jon Orvrasky of the Marine Corps.) All have been involved with The Mission Continues, a nonprofit that awards community service fellowships to vets, and helps them apply the skills they learned in the armed forces to work and life at home. Greitens—an ex-Navy SEAL and Rhodes Scholar—founded the group in 2007, and was included in the 2013 Time 100, where he was praised by former Joint Chiefs chairman Mike Mullen as “one of the most remarkable young men I have ever encountered.”

It just so happened that Star Trek director J.J. Abrams is a big supporter of The Mission Continues, and wanted to partner with it. “The idea of service, the idea of sacrifice—these things felt very much in line with what Star Trek was about,” Abrams told the Daily Beast. “So when the sequel was being discussed, [my wife] Katie and I schemed a way to have The Mission Continues form a partnership with the movie in a way that I don’t think movies had done before.” Abrams went on to co-sponsor events with the organization, including a children’s food drive and a charity ticket auction. The film’s website includes a prominent link to the nonprofit’s site, and the closing credits include this plaque:

THIS FILM IS DEDICATED TO OUR POST-9/11 VETERANS
WITH GRATITUDE FOR THEIR INSPIRED SERVICE ABROAD
AND CONTINUED LEADERSHIP AT HOME.

“They wanted some guys from The Mission Continues to be involved with the movie, and I was lucky enough to be one of the guys who was selected,” McCann says. In April 2012, he continues. “the four of us went out to LA for the costume fitting, and then flew back home, and then went back out to LA for filming; we were on set for 13 hours. We spent a lot of time with J.J. and Chris Pine, in particular.” (McCann was on set around the seventh anniversary of what The Mission Continues calls his “Alive Day“—the day a soldier survives an attack or injury in wartime.)

The veterans’ cameos come toward the end of the film, during a scene depicting a memorial service for fallen Federation soldiers. It’s a scene that the veterans themselves helped shape. “It’s a funeral scene, and since we do flag-folding in the military, we thought, why don’t we take that concept and do the same thing in the movie,” McCann recalls. Abrams and Greitens worked out the staging, and made sure it was performed properly.

Here are photos of the four veterans in the film: 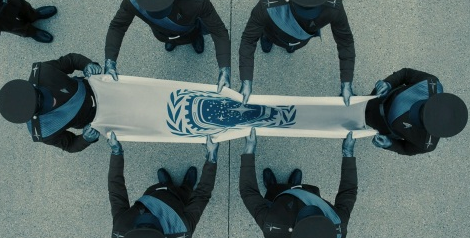 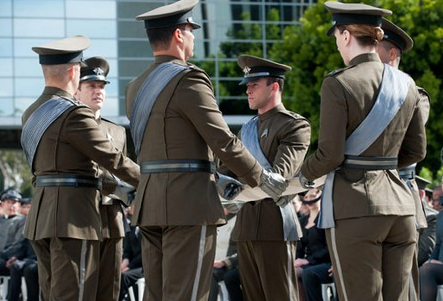 Greitens is at the far end of the flag, McCann is to his right, Orvrasky to his left, and Steinman directly across from Greitens. Paramount Pictures

According to McCann, there was another scene shot with Mission Continues members, but it didn’t make the final cut. “I’m not sure if that’s gonna be on the DVD,” he says. The deleted scene shows a social gathering held right after the memorial, where the famous Star Trek characters mingle. “You know the alien creature that always follows Scotty? I shake the creature’s hand in the deleted scene.”

McCann never expected he’d show up in a Hollywood flick. He went into the military right out of high school, becoming the first in his family to enlist. (“I just kinda made the decision and went with it.”) He served from 2004 to 2006 as a machine gunner, handling an M240, a .50 caliber machine gun, and an MK 19 automatic grenade launcher. For his injuries and service in Iraq, he was awarded a Purple Heart.

“Most people don’t realize what I’ve been through and what I’ve seen,” McCann told me.

During his months of rehab following the ambush, doctors warned that he might be in a wheelchair by age 35. But at least for now, he’s recovered to the point where he has made biking his primary hobby. “Most people don’t realize what I’ve been through and what I’ve seen,” McCann says. “They see me walking like a regular person, and have no idea what happened to me, just because of all the amazing doctors and nurses.”

After receiving a medical discharge from the Corps, McCann struggled with post-traumatic stress disorder and spent six years trying to figure out what he wanted in life. In January 2012, he received a fellowship from The Mission Continues, which brought him work with Big Brothers Big Sisters and the United Service Organizations. As a TMC alum, he continues to work with the group and pitch in when he can. McCann lives outside of Cleveland, and is still trying to figure out his next move. But for the time being, he can revel in his appearance in what will inevitably be one of the year’s highest-grossing summer blockbusters.

“It’s incredible that someone of J.J.’s stature made this partnership with us and was so generous,” McCann says. “That he helped out with us—it’s just amazing.”