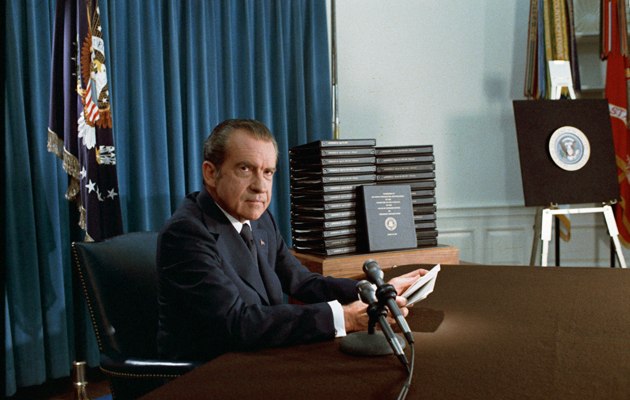 On Monday, President Obama weighed in on the alleged targeting of conservative nonprofit groups by the Internal Revenue Service, calling for a full investigation into what he said would constitute “outrageous” conduct. That’s one way to put it. Here’s another: depressingly normal. For much of the last century, abuse of the IRS for political ends has been the rule, not the exception. Under Republican and Democratic presidents alike, the IRS has gone after communists, students, black activists, young conservatives, and mainstream political rivals. Here are some prime examples:

Franklin D. Roosevelt: According to libertarian historian Burton W. Folsom’s New Deal or Raw Deal, Elliott Roosevelt, the president’s son, noted that FDR “may have been the originator of the concept of employing the IRS as a weapon of political retribution”—most notably against former Louisiana governor and senator Huey Long. (The famously corrupt Long, in fairness, was kind of asking for it.) Rep. Hamilton Fish, a New York Republican, alleged that Roosevelt’s IRS had gone after him on trumped-up charges—and when that failed, handed the investigation over to the FBI instead. Roosevelt’s longtime Treasury secretary, Henry Morgenthau Jr., admitted that the administration had deliberately targeted his Republican predecessor, Richard Mellon, on trumped-up charges of tax evasion.

Dwight Eisenhower: The FBI’s counterintelligence program, COINTELPRO, relied heavily on the compliance of the IRS to go after members of the Communist Party. Per a 1976 Senate report, “In its efforts against the Communist Party, the FBI had unlimited access to tax returns; it never told the IRS why it wanted them, and IRS never attempted to find out.”

John F. Kennedy: In 1961, Attorney General Robert Kennedy teamed up with United Auto Workers president Walter Reuther to produce the “Reuther Memorandum,” which proposed curtailing the influence of far-right groups in two ways. The first was the enforcement of the Federal Communication Commision’s “Fairness Doctrine,” to limit their use of the airwaves. The second was the IRS, through an initiative called “The Ideological Organizations Audit Project,” which explored the political activities of conservative nonprofits. The program eventually expanded to the other of the side of political spectrum, but according to the 1976 Senate investigation, that was mostly a facade of nonpartisanship.

Richard Nixon: The godfather of “Nixonian tactics” believed he’d been a political target of the agency in the Truman administration—not that he needed an excuse to use the Internal Revenue Service as a tool with which to dispatch “enemies.” Under Tricky Dick, the IRS created the Special Services Staff (SSS) to investigate thousands of perceived enemy groups and individuals. (Nixon aide Pat Buchanan feared that groups like the Ford Foundation and Brookings Institution were acting essentially as Democratic organs.) White House counsel John Dean testified that the administration pushed the IRS to audit reporters who wrote stories critical of Nixon, such as Newsday‘s Robert Greene. Nixon himself wanted the SSS to focus on political adversaries like 1972 presidential challenger George McGovern, student groups, and civil rights organizations like the NAACP. When the IRS audited Billy Graham, a Nixon ally, the president responded with force: “Get the word down to the IRS that I want them to conduct field audits of those who are our opponents, if they’re going to do in our friends.”

Jimmy Carter: Republicans accused the born-again Christian president of an “unconstitutional regulatory vendetta” against religious institutions after his IRS director, Jerome Kurtz, introduced new regulation to end the tax-exempt status of Christian schools. Kurtz ultimately had to retain Secret Service protection after a wave of death threats from supporters of religious education.

Ronald Reagan: This one hit close to home. Mother Jones had been around for six years when, in 1981, Ronald Reagan’s IRS tried to shut it down. The agency concluded that the magazine was not living up to its tax-exempt motives and instead functioned like any other publishing house, with the goal of making as much money as possible. That was weird, given that Mother Jones had to that point never made a profit. The timing was also suspicious—a half-dozen or so other left-of-center publications came in for the same scrutiny by the agency. MoJo eventually won—but not until it had burned hundreds of thousands of dollars in legal fees.

Bill Clinton: The conservative watchdog group Judicial Watch, which filed a string of lawsuits against the administration centering on public records, alleged that it was in the crosshairs of the Clinton White House—along with a dozen other groups and individuals that had gotten on the president’s bad side. The list of of audited parties in the Clinton era included Gennifer Flowers, Paula Jones, Juanita Broaddrick, the Heritage Foundation, and the National Rifle Association. Documents later released by the IRS during the Bush administration revealed that high-ranking Democrats, including a half-dozen members of Congress, had written to the IRS requesting an investigation into Judicial Watch’s nonprofit status. One IRS official allegedly told the group, “What do you expect when you sue the president?”

George W. Bush: The NAACP experienced an unwelcome case of Nixon Nostaliga in 2004, when it found itself under IRS scrutiny after the group’s chairman, Julian Bond, told attendees of its annual convention to oust Bush. (The president had been invited to the convention but declined.) After a two-year investigation, the IRS backed off.