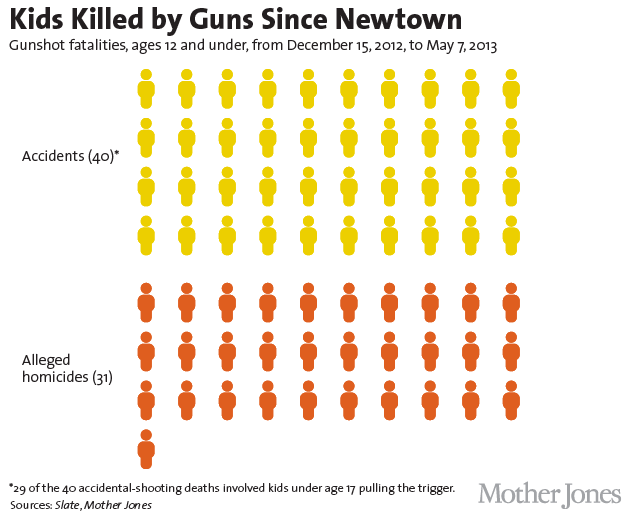 In the last five months there have been at least 71 of them. None older than 12, several as young as five or six months, all of their lives ended by a bullet.

There was four-year-old Trinity Ross in Kansas City, who lasted about a week on life support after a playmate came across her father’s gun in the TV room. There was 10-year-old Alexandra Brown in Ohio, apparently murdered in the backseat of a car by her father just before he took his own life. There was three-year-old Jadarrius Speights, who got his little fingers on his uncle’s loaded 9 mm in an apartment in Tampa, just Tuesday night. His death came one week after a five-year-old boy inside a rural Kentucky home pointed a small rifle at his two-year-old sister, Caroline Sparks, and pulled the trigger.

Sparks’ death drew extensive media coverage and stirred particularly strong emotions, in part because the weapon used was specifically made for and marketed to kids. As I reported last week, its manufacturer, Crickett Firearms, has seen its business boom in recent years. The intense response to the tragedy clearly was also a legacy of the Newtown massacre, whose 20 young victims shook the nation and set off an extraordinary debate about gun violence.

But what happened to Sparks was not extraordinary. Her killing, and those in dozens of other American communities this year, is essentially business as usual—it happens on average about once every two days. An average of 197 children ages 12 and younger died from gun shots each year from 1999 through 2010, according to data from the Centers for Disease Control and Prevention (CDC). Dozens are killed annually in accidents—often with other young kids firing the gun—although the majority die in homicides.

Among the 71 shooting deaths we analyzed from the past five months:

Details on all 71 deaths are in the spreadsheet below, including the name, age, and gender of the victims, the locations of the incidents, and links to news reports describing how the shootings occurred. The majority of the data was gathered using Slate‘s crowd-sourced aggregation of gun deaths, with additional details and research by Mother Jones. The data set includes the majority of such gun deaths in the past five months, but almost certainly not all of them.

From Boy Scouts to 4-H and beyond, there is a long American tradition of teaching kids how to use and responsibly handle firearms. (It’s a tradition I know firsthand, having grown up shooting bolt-action rifles and shotguns for sport.) But federal law prohibits the sale of a gun to anyone under 18, and in accidental-death cases the issue of adult responsibility is paramount. A torrent of harsh online comments was directed at the parents of Caroline Sparks in the days after that story broke. Beyond the responsibility of adult guardians, legal culpability varies by state and can be difficult to prove, as shown in the Trinity Ross case, in which the prosecutor found insufficient evidence for pressing charges.

A gun company that makes hot pink rifles for girls came under fire for featuring photos of tykes and infants with weapons.

Since Sparks’ death, debate has intensified around whether a company like Crickett Firearms—whose website featured photos of tykes and infants with guns until the company took them down last week—is ethically off-target. The company, which says it is the leading rifle supplier in the youth market, produces firearms with different barrel and stock designs, including some made in hot pink to appeal to young girls. That may help boost sales, but there are other potential consequences: In February, two young siblings in South Carolina apparently mistook a pink handgun for a toy when three-year-old Temorej Smith was fatally shot in the head.

Many accidental shootings happen in or around a family home, often involving kids playing with guns. Others involve parents accidentally shooting their kids. These incidents don’t exactly shore up the gun lobby’s claim that Americans need to secure their homes with handguns or even AR-15 assault rifles. Public health researchers have found that having a gun in the home puts gun owners and their families at higher risk of being shot intentionally or accidentally. Forty-three percent of homes with guns and kids contain at least one unlocked firearm. And one study found that a third of 8- to 12-year-old boys who came across an unlocked handgun picked it up and pulled the trigger.

Child deaths from gun shots are statistically rare on a per capita basis and in absolute numbers. But it’s important to note that the CDC data cited above only gives a sense of the overall problem. As Daniel Webster of the Johns Hopkins Center for Gun Policy and Research explained to NBC News, inconsistency in how states report shootings leads to less reliable national statistics. That in turn underscores how relatively little good data we have on gun violence, thanks in no small part to the National Rifle Association’s efforts to deep-six serious research.

And the number of kids who get shot each year is significantly larger when you include those who survive: According to a report by NPR, emergency rooms treat more than 3,000 children for accidental shootings annually. That number now includes a seven-year-old boy in Houston, who was shot by his five-year-old brother less than 48 hours ago.

(Click here for the Google spreadsheet view, where you can access the full text in each cell. Also see our award-winning investigation of gun laws and mass shootings.)