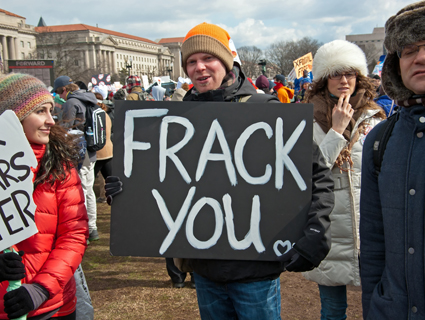 A coalition of grassroots environmental groups—plus a few professors and celebrities—issued a public message to the Environmental Defense Fund on Wednesday: You don’t speak for us on fracking.

The coalition of 67 groups released an open letter to EDF President Fred Krupp criticizing his organization for signing on as a “strategic partner” in the Center for Sustainable Shale Development (CSSD), a Pittsburgh-based nonprofit that bills itself as an “unprecedented, collaborative effort of environmental organizations, philanthropic foundations, energy companies and other stakeholders committed to safe, environmentally responsible shale resource development.” CSSD’s partners include Chevron, CONSOL Energy, and Shell. The partners have been working together on voluntary industry standards for hydraulic fracturing, or fracking, a controversial process used to extract natural gas from shale rock.

The groups that signed the letter included national organizations such as Greenpeace and Friends of the Earth, as well as regional environmental outfits such as the Ohio Valley Environmental Coalition and Catskills Citizens for Clean Energy. Actors Mark Ruffalo and Debra Winger also signed the document. They wrote:

The very use of the word sustainable in the name is misleading, because there is nothing sustainable about shale oil or shale gas. These are fossil fuels, and their extraction and consumption will inevitably degrade our environment and contribute to climate change. Hydraulic fracturing, the method used to extract them, will permanently remove huge quantities of water from the hydrological cycle, pollute the air, contaminate drinking water, and release high levels of methane into the atmosphere. It should be eminently clear to everyone that an economy based on fossil fuels is unsustainable.

Gail Pressberg, a senior program director with the Civil Society Institute, criticized EDF for a “willingness to be coopted” by industry in a call with reporters about the letter. “For too long, nationally-oriented groups have tried to call the shots on fracking,” she said. “These local people can and should be allowed to speak for themselves.”

EDF’s Krupp responded with his own letter on Wednesday, defending the group’s participation in CSSD and its record of “fighting for tough regulations and strong enforcement” on natural gas extraction:

Let’s be clear about where EDF stands. It’s not our job to support fracking or to be boosters for industry. That is not what we do. In fact, we regularly clash with industry lobbyists who seek to gut legislation protecting the public, and we have intervened in court on behalf of local communities and their right to exercise traditional zoning powers. We have made it clear that there are places where fracking should never be permitted. But if fracking is going to take place anywhere in the U.S.—and clearly it is—then we need to do everything in our power to protect the people living nearby. That includes improving industry performance in every way possible. In our view, CSSD, a coalition that includes environmental organizations, philanthropic foundations, energy companies and other stakeholders, is one way to do that.

Make no mistake: CSSD is not and never will be a substitute for effective regulation. Stronger state and federal rules, along with strong enforcement, are absolutely necessary. However, voluntary efforts can build momentum toward regulatory frameworks.

I’ve covered the sparring between EDF and grassroots groups over gas before. At the heart of it is that many of the grassroots groups want there to be no fracking, period. EDF’s position is that fracking is “never going to be without impact, never going to be risk free,” as EDF Vice President Eric Pooley described it to me, “but we’re also mindful that it’s happening all over the country.” Voluntary standards, Pooley said, are not the ultimate goal—but they can help reduce impacts in communities that already have drilling, and lay the groundwork for actual regulations. “How could we not, in good consciousness, want to engage if we see an opportunity to reduce impacts in communities?” he said.

For what it’s worth, both enviros and industry folks have berated CSSD for being too accommodating of the other side.