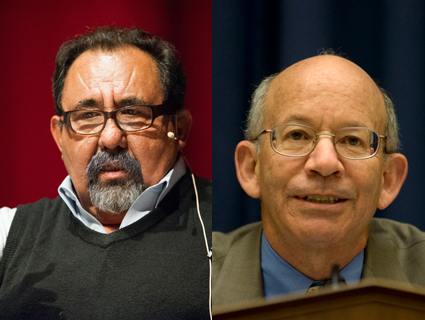 If Rep. Ed Markey wins the special election to become Massachusetts’ junior US senator next month, it’ll have at least one unintended consequence: A potentially ugly fight between two progressive Democrats for Markey’s seat as the top Democrat on the House Natural Resources Committee. After Oregon Rep. Peter DeFazio launched his candidacy by getting 20 prominent congressmen—including Georgia Rep. John Lewis and two former chairs of the committee—to sign onto a letter on his behalf, Rep. Raul Grijalva (D-Ariz.) is pushing back, winning the endorsement, on Thursday, of the Congressional Hispanic Caucus.

The battle-lines are familiar, if not not entirely related to the actual responsibilities of the Natural Resources Committee: immigration reform and the Keystone XL pipeline. “DeFazio actually has a very anti-Democratic record on immigration,” argues Grijalva spokesman Adam Sarvana. As proof, his office is sending around a fact-sheet highlighting a vote DeFazio cast in 2012 that would have authorized the Keystone XL pipeline as part of a larger transportation package—in contrast to DeFazio’s otherwise outspoken criticism of the project. Sarvana is also touting support DeFazio received from the anti-reform outfit Numbers USA. (The group does not endorse candidates but has praised DeFazio’s backing of universal electronic citizenship checks as a condition of employment.)

In a statement provided to Mother Jones, DeFazio, who is still considered the front-runner for the job, dismissed the Keystone vote as a procedural oddity: “I just helped lead the fight in two committees and on the floor against the Keystone Pipeline. In 2012, I voted for a transportation bill designed to bypass Tea Party obstructionist and get a much needed transportation bill to conference. As a conferee, I had assurances from Senator Barbara Boxer the Keystone provision would be stripped out of the final bill.”

Markey’s job isn’t open just yet—the special election isn’t until June and recent polls have shown a tight race. But the Democrat has never trailed, and his possible successors aren’t waiting around for clarity.