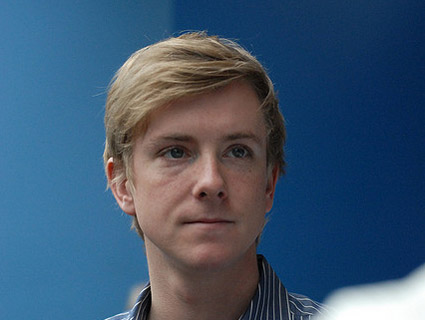 Facebook cofounder Chris Hughes, who owns the New Republic magazine, is a member of the Democracy Alliance.<a href="http://flickr.com/link-to-source-image">usv</a>/Flickr

Once or twice a year, Charles Koch, the billionaire industrialist and one-half of the “Koch brothers” duo, invites several hundred donors, big-name politicians, and conservative thinkers to a posh resort somewhere classy like Palm Springs or Aspen or Vail. The Kochs and their allies discuss how best to elect their favored politicians and spread their free-market ideas, and they hear pitches from conservative activists trying to carry out that strategy on the ground. Then the attendees make a pledge to fund the groups fighting for their causes. The Koch donor retreats are, by now, well known in political circles, and a magnet for reporters and protesters.

What’s often left unmentioned in coverage of the Kochs’ gatherings is that Democrats and progressives do the same thing. The Democracy Alliance is an exclusive group of about 100 funders, founded in 2005 by Democratic strategist Rob Stein. Members include billionaire financier George Soros and Facebook cofounder Chris Hughes, who owns the New Republic magazine. Matea Gold of the Los Angeles Times was recently given a rare glimpse inside the Alliance’s operations, and she came away with a useful, fascinating story.

Since 2005, the Alliance has directed roughly $500 million to left-leaning organizations, including the Center for American Progress think tank, the watchdog Media Matters for America, and the political data firm Catalist. The Democracy Alliance, as an organization, does not make donations; instead, leaders of left-leaning organizations pitch the group’s members, and the Alliance recommends which causes its wealthy members should support. Members must give at least $200,000 annually to Alliance-backed organizations, on top of a $30,000-a-year membership fee.

The Alliance recently met over five days at a hotel in Laguna Beach, Calif., not far from the Koch donor meeting at the Renaissance Esmeralda golf resort in Palm Springs. At the Laguna Beach retreat, Gold reports, Alliance members pledged $50 million to an array of organizations.

Two story lines emerged out of the latest Alliance event. One was an intense focus on immigration reform among Alliance members as Congress considers bipartisan legislation to overhaul the country’s immigration system. The other big news was the Alliance’s endorsement of Organizing for Action, the nonprofit devoted to enacting President Obama’s second-term agenda. OFA has said it wants to raise $50 million this year, but it raked in less than $5 million in the first three months of 2013. The Alliance’s decision to back OFA, then, couldn’t have come at a better time:

Among those on hand to pitch to the donors was Jon Carson, executive director of Organizing for Action, who stressed the ways in which his group is partnering with other liberal advocacy organizations.

“One thing we’ve made very clear to everyone is we’re going to work very collaboratively with everyone out there in the progressive infrastructure,” Carson said. “We’re going to focus on the pieces we bring to the table and not duplicate things.”

[Alliance chairman (and former Mother Jones board member) Rob] McKay said Carson assuaged worries that Organizing for Action, run by former Obama campaign officials, would compete with other groups. “The biggest concern would be if OFA was just going to try to re-create the wheel in a bunch of areas where we felt significant investments have been made,” he said.

The pro-Obama group, which had already received some donations from Democracy Alliance members, was recommended for funding for one year. It will be reconsidered next year but was not included in the three-year portfolio.

The hottest topic of the conference was immigration reform, as leaders of the Service Employees International Union and other advocates emphasized that comprehensive legislation could pass this year.

“The partners were really impressed with how close we are on this, and yet how tenuous it is, even at this stage,” McKay said. “We’ve got to get this done.”

The full story is one of the better detailed accounts I’ve seen of the Democracy Alliance, which will continue to play a crucial role on immigration, gun control, and other pressing issues on Congress’ to-do list.