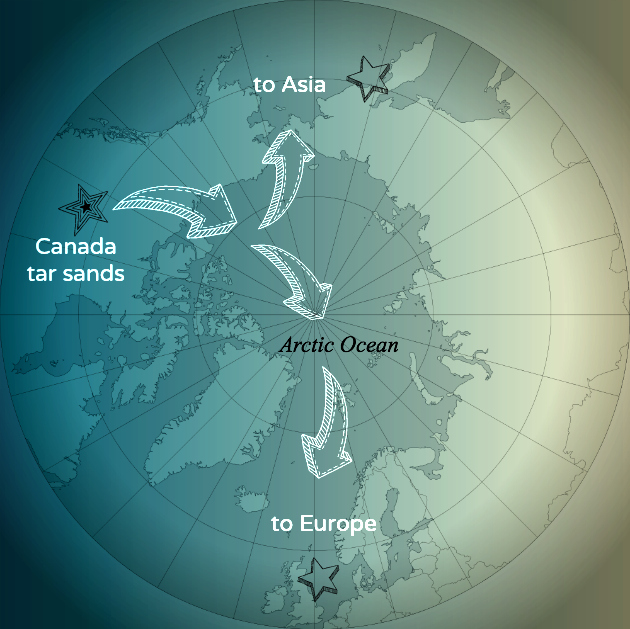 Canada is considering bypassing the beleaguered Keystone XL pipeline—which would carry oil from tar sands deposits in Alberta to the US and the Gulf of Mexico—by shipping across the Arctic Ocean instead. The proposal is in its infancy, reports the Alaska Dispatch, but is developing as Keystone XL and other proposed pipelines to British Columbia and Quebec remain in limbo.

The Arctic Ocean scenarios would also include a pipeline—north from Alberta’s tar sands through (sparsely settled, presumably uncontested) regions along the Mackenzie River Valley and on to the Arctic coastal town of Tuktoyaktuk, from there to be shipped on tankers to Asia or Europe. From the Alaska Dispatch:

Alaska could find itself helplessly watching large tankers loaded with oil and gas pass by its shores. With little spill-response infrastructure in Alaska’s Arctic—no deepwater port exists, for instance—the state is sitting vulnerable, [says Alaska Lt. Gov. Mead] Treadwell, a former chairman of the U.S. Arctic Research Commission. “If somebody is seriously talking about building an oil pipeline that would put oil on the water to go through Alaska waters,” he said, “I believe we would have the time through diplomatic negotiation to be able to meet the challenge.”

Not to mention which does Canada really think they’ll escape the wrath of Greenpeace—plus a major redirect of anti-Keystone energies—on an Arctic Ocean oil shipping plan?