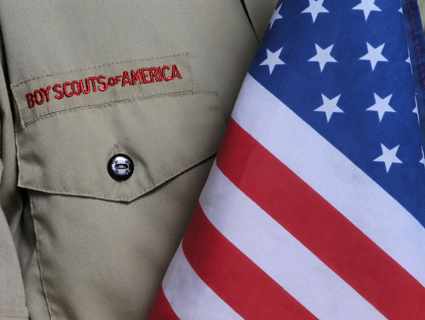 The board that governs the Boy Scouts of America plans to vote on Thursday on a proposal to lift the ban on gay members.

But while the organization may soon welcome gay scouts, they are apparently not so welcoming of treehuggers. The Center for Investigative Reporting posted a story this week on the Scouts booting out Kim Kuska, a naturalist and former biology teacher who been affiliated with the Scouts for 50 years, over his “obsession” with protecting the rare Dudley’s lousewort:

Since the 1970s, the Eagle Scout and adult Scout leader-turned-whistle-blower has worked to protect the plant from extinction at Camp Pico Blanco, a Boy Scout camp nestled in the mountains along the Little Sur River south of Monterey, Calif. The camp is home to nearly 50 percent of all known specimens of Dudley’s lousewort, a flowering fern-like plant found in only three places in the world.

But over the past four decades, Scout officials and camp staff have threatened its existence repeatedly by harvesting old-growth trees it needs to survive, crushing some of the few remaining plants and introducing potentially competitive species. Under state law, it is illegal to harm a plant that is classified as rare.

The camp also cut down several trees in the old-growth forest in 2011 without a permit, a Scout official acknowledged.

Kuska’s whistleblowing reportedly got him drummed out of the Scouts earlier this month. Read the whole story here.