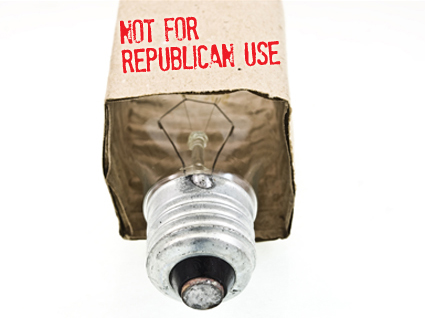 Back in 2011, Rep. Michele Bachmann (R-Minn.) declared war on energy-efficient light bulbs, calling “sustainability” the gateway into a dystopic, Big Brother-patrolled liberal hellscape. When the lights went off during Beyoncé’s halftime set at the last Superbowl, conservative commentators from the Drudge Report to Michelle Malkin pointed blame (erroneously) at new power-saving measures at New Orleans’ Superdome. And one recent study found that giving Republican households feedback on their power use actually encourages them to use more energy.

Why do conservatives, who should have a natural inclination toward conservation, have a beef with energy efficiency? It could be tied to the political polarization of the climate change debate.

A study out today in the journal Proceedings of the National Academy of Sciences examined attitudes about energy efficiency in liberals and conservatives, and found that promoting energy-efficient products and services on the basis of their environmental benefits actually turned conservatives off from picking them. The researchers first quizzed participants on how much they value various benefits of energy efficiency, including reducing carbon emissions, reducing foreign oil dependence, and reducing how much consumers pay for energy; cutting emissions appealed to conservatives the least.

The study then presented participants with a real-world choice: With a fixed amount of money in their wallet, respondents had to “buy” either an old-school light bulb or an efficient compact florescent bulb (CFL), the same kind Bachmann railed against. Both bulbs were labeled with basic hard data on their energy use, but without a translation of that into climate pros and cons. When the bulbs cost the same, and even when the CFL cost more, conservatives and liberals were equally likely to buy the efficient bulb. But slap a message on the CFL’s packaging that says “Protect the Environment,” and “we saw a significant drop-off in more politically moderates and conservatives choosing that option,” said study author Dena Gromet, a researcher at the University of Pennsylvania’s Wharton School of Business.

The chart below, from the report, shows how much liberals and conservatives value each argument for efficiency: While liberals (gray) valued all three equally, conservatives (white), were significantly less moved by and most at odds with liberals over the carbon-saving argument. 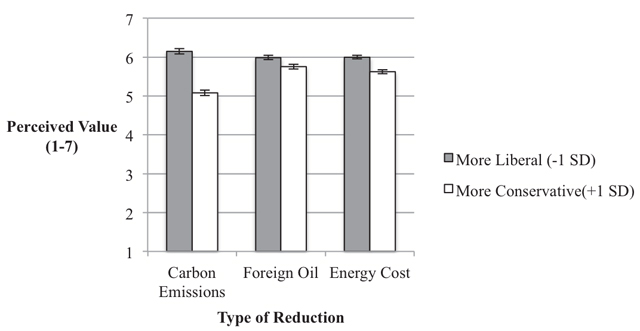 Gromet said she never expected the green message to motivate conservatives, but was surprised to find that it could in fact repel them from making a purchase even while they found other aspects, like saving cash on their power bills, attractive. The reason, she thinks, is that given the political polarization of the climate change debate, environmental activism is so frowned upon by those the right that they’ll do anything to keep themselves distanced from it.

“When we’re given an option where the choice is made to represent a value that we don’t identify with or that our ideological group doesn’t value,” she said, “this can turn the purchase into something undesirable. By making [the environment] part of the choice, even though they might see the economic benefit, they no longer want to put their money toward that option.”

This graph, lifted from the report (on the x-axis, -1 is liberal and 1 is conservative), shows the damage the wrong messaging can do: With no messaging, roughly 60 percent of all participants picked the CFL; a pro-environment message boosted support in liberals but cut it sharply in conservatives:

That gap could represent real lost opportunities in the private sector: the EPA’s Energy Star label, for example, perhaps the most prominent label for energy-efficient products, puts greenhouse gas savings front and center in its packaging, and proudly boasts that products with the label helps Americans “protect our climate.”

“It’s always important to speak to people where they are.”

This isn’t just a problem for businesses trying to push energy-efficient products, but also for environmentalists and policymakers pushing to write efficiency or other climate-friendly policies into law, said Jessica Goodheart, director of RePower LA, which advocates for energy-saving practices in the Los Angeles power utility. Goodheart said while tackling climate change is driving force behind her lobbying, she more often finds herself talking about jobs and the economy, especially when addressing small business owners.

“It’s always important to speak to people where they are, and with energy efficiency there are so many positive messages you can use,” she said.

And there’s no shortage of opportunities to roll those messages out: Last week, Energy Department researchers found that rules requiring utilities to use renewable energy were under attack in over half the states they exist in; such laws might have better luck fending off Bachmann-esque fusillades if they re-focus their rhetoric around their cost-savings, energy independence, or other benefits, Gromet’s research suggests, especially in conservative states.

That doesn’t necessarily mean green advocates need to somehow cover up the environmental benefits of a policy or product: A study from Stanford psychologists released last December found that re-framing environmental messaging in terms of preserving the “purity” of the natural world resonated morally with conservatives.

“There’s not going to be a one-size-fits-all message that will appeal equally,” Gromet said. “It’s important to know the market you’re appealing to; there are some messages you may want to avoid.”