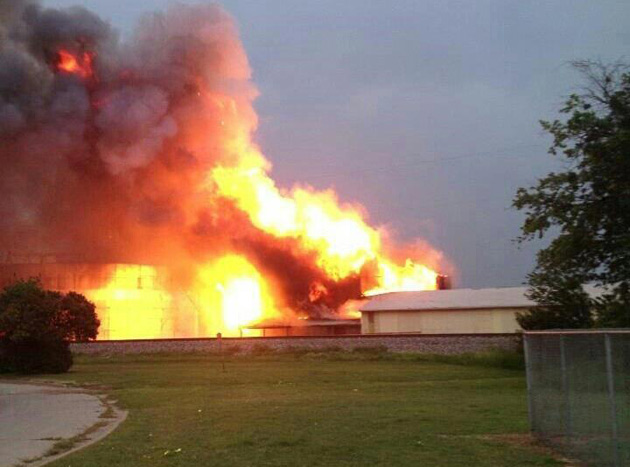 Shortly before 8 p.m. CDT on Wednesday, a massive explosion rocked the central Texas town of West following a fire at a fertilizer plant. Early reports are conflicting, but it appears that over a hundred of people have been injured, and dozens of homes and businesses have been damaged or destroyed, including a high school and a nursing home.

Authorities are concerned that winds could carry the toxic fumes into residential areas. At a press conference on Wednesday night, Mayor Tommy Muska (who is also a volunteer firefighter) said, “A lot of people won’t be here tomorrow…it’s a cut across our hearts.” Complicating matters is the location: A volunteer fire department serves the town of 2,700, and casualties are being transported to the nearest hospital in Waco—20 miles away.

The fire escalated so fast because of its fuel:

To put #West, TX in perspective, 4,800 lbs of fertilizer were used in OKC bombing. That fit in a Ryder truck. This was an ENTIRE PLANT.

The clearest footage we have of the blast itself comes from a man who appears to have been watching the fire from his car with his young daughter. The explosion comes about 30 seconds in (warning: not for the faint of heart):

The Dallas Morning-News captured the audio of the emergency dispatcher responding to the fire. At the 7:41 mark, the dispatcher advises that all units “need to load up and get out of there right now”:

While the explosion registered on a seismograph over 400 miles away in Amarillo, Texas:

In February, a nearby school was evacuated due to a “concerning fire” from a fertilizer plant in the area:

By midnight on Thursday, more than 100 people had offered their homes to people displaced by the West, Texas explosion using a shared Google Doc. Over on Reddit, people are attempting to assemble a crowdsourced map of the blast site and emergency services that you can see here.

UPDATE 3, Thursday, April 18, 2:34 p.m. EDT: Estimates have put the number of dead and missing at 15, but those figures are expected to rise. According to a 2011 safety plan filed with the EPA, the plant did not have firewalls or an automatic shutdown system, reported the Wall Street Journal.

TCEQ official says #West fertilizer plant hasn’t had a complaint since 2006 — meaning it hasn’t been inspected since.

“We haven’t had a complaint from that facility since 2006,” Zak Covar, director of the Texas Commission on Environmental Quality, told the Texas Tribune. Covar added that the facility had been “grandfathered” from some environmental regulations until 2004.

The Bureau of Alcohol, Firearms, and Tobacco will be spearheading the inquiry into what caused the explosion, the Waco Tribune reports. Officials told the paper the investigation could take up to six months.

As many feared and expected, the number of those killed by the blast has risen. Tommy Muska, the mayor of West Texas, confirmed to USA Today and the LA Times that as many as 35 are dead, including 10 first responders. Waco Tribune reporter Lowell M. Brown captured the impact of this felt by one resident, who, after listing the names of volunteer firefighters still missing, told the paper the town would never be the same again. Meanwhile, survivors of the blast are taking comfort in the famed kolaches and coffee at Czech Stop—a nearby, 24-hour institution that kept its doors open through the tragedy.