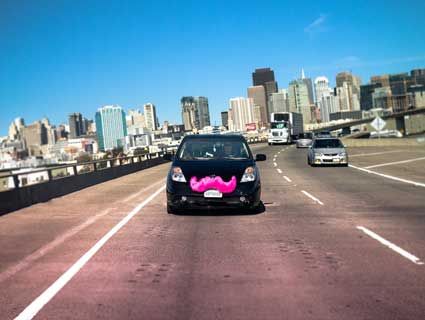 If you don’t live in the San Francisco Bay Area or a handful of big cities, you probably haven’t noticed the revolution in the taxi and livery cab businesses. In the Bay Area, local startups Uber, SideCar, and Lyft have made it a breeze to snag a ride in a taxi, a limo, or even your neighbor’s aging Honda Civic. All it takes is firing up one of their apps on your smartphone. These companies’ GPS-based dispatch systems allow almost anybody with an Android or iPhone and a clean driving record to make money as a quasi-legal gypsy cab driver. This ride revolution has made getting around town cheaper and easier, but has sapped the livelihoods of traditional cabbies and raised safety and security concerns.

Uber now operates in dozens of cities, and SideCar isn’t far behind, having expanded its gypsy cab (or “ride-sharing”) service last month to Chicago, Boston, Brooklyn, and Washington, DC. Lyft’s trademark pink mustache, meanwhile, has become a pop culture meme. But the success of these alt-taxi firms may ultimately depend on whether California regulators put the kibosh on them—since other cities and states could well follow California’s lead.

Today, the California Public Utilities Commission will hold a workshop aimed at drafting new regulations for the companies, which it deems “new online-enabled transportation services.” Up for discussion will be whether these services must play by the same rules as traditional transportation companies—which include hefty insurance requirements, handicap accessibility, and set safety standards.

Many taxi and limo drivers, and even some of Uber’s own “partners” (drivers) think they should. I caught up with both sides at Uber HQ, where an ad hoc group of UberBlack drivers calling themselves Limounion was holding a protest, claiming Uber was taking a cut of their tips—a skirmish I wrote about here.