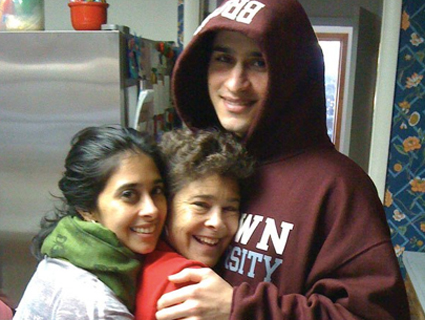 UPDATE (10:53 a.m. EDT, 4/25/13): On Thursday morning, the Rhode Island Department of Health confirmed that a body found in the Providence River on Tuesday is that of Sunil Tripathi. Click here to read a statement from the Tripathi family.

In the aftermath of Monday’s Boston Marathon attack, a heaving pile of junk information clouded the breaking news reports. Casualty figures were botched, the number of explosive devices was misreported, and suspects were wrongly identified. On that last front, one of the families deeply affected by the press and public’s false conclusions was that of Sunil Tripathi, a 22-year-old Brown University philosophy student who went missing on March 16.

Sunil’s family, who live in Radnor Township, Pennsylvania, and describe him as “kind, gentle, and shy,” had launched a social-media campaign to find him; their Facebook page garnered nearly a quarter million views in the first week of his disappearance. As the police search for Sunil expanded, his story began to make national news last month with mentions from Fox News, ABC News, the Boston Globe, and other outlets.

The Tripathi family’s ordeal collided with the Boston bombings shortly after the FBI released images of the two suspects late Thursday. Reddit and other popular social-media platforms, already abuzz with theories of suspicious characters caught on camera near the bomb sites, embarked on a mission to ID the two young men. One of the young women who went to high school with Sunil thought she recognized him from one of the photos released by the FBI. Redditors also picked up on the supposed likeness, and by the evening Reddit and Twitter (on which “Sunil Tripathi” would soon trend worldwide) had exploded with the theory. By about 7:30 p.m. EDT, the Tripathi family began to be flooded with calls, Facebook posts, and harassing emails raising the allegation. The family suspended the Facebook page at around 10 p.m., flagged the messages, and reached out to law enforcement agencies, including the FBI.

“The hardest part of this was how far from any actual evidence there actually was, and how quickly and how painfully this traveled.”

Many national and local reporters caught wind of the Reddit-powered theory, and by Friday morning roughly a dozen news vans had parked themselves at the Tripathi residence in Radnor eager to question the family. (All of this, even though Sunil’s Tripathi’s name was never once mentioned on the Boston police scanner prior to the initial suspicions on Twitter.)

“We were hoping the Boston investigation was advancing fast enough that it would publicly prove what [my family] all knew,” Sangeeta Tripathi, Sunil’s sister (a 2004 Brown graduate who now works as an NGO public health professional), tells me. “The hardest part of this was how far from any actual evidence there actually was, and how quickly and how painfully this traveled…We find it incredibly unfortunate that media outlets were so quick to jump without checking with authorities, but we hope they use the same energy and intensity they showed in the past 24 hours to really help us find Sunil.”

After hours of fevered speculation, early on Friday morning NBC’s Pete Williams batted down the rumors, and broke the news that authorities had identified brothers Tamerlan and Dzhokhar Tsarnaev as the primary suspects.

The moderator of the “FindBostonBombers” subreddit page (going by the name “Rather_Confused“) released a statement apologizing: “This event shows exactly why the no personal information until confirmation rule is in place. Out of respect for Tripathi and his family, I ask that users here please remove any and all links about him.”

I asked Sangeeta if her family had yet received any apologies from news organizations whose employees (including BuzzFeed and Politico) helped push the erroneous ID. “No, we have not,” she says. “Apologies have been limited to particular individuals and a few network-based responses, including the Reddit apology.”

As the Boston Marathon manhunt winds down, the Tripathi family’s nightmare continues. Sunil Tripathi remains missing; authorities do not suspect foul play, and an FBI forensic analysis turned up zero clues to his whereabouts.

“Every minute is extremely difficult to maintain hope,” Sangeeta says. “But we hope that the other side of this very, very, very sharp sword is that we have more eyes on [Sunil’s story].”

The family has launched another campaign on Facebook encouraging supporters to write messages of love and encouragement on their hands and post the photos online. Sangeeta tells me that they had planned to start this campaign on Tuesday, but benched the idea after the bombing. They had no way of knowing that the two stories would become so harrowingly, and so wrongly, intertwined.

Saw your story on Sunil’s sister and I want to offer the family an apology. I was one of the tweeters who mistakenly helped spread the meme her brother’s name was mentioned on the scanner. Might you share her email?

UPDATE (10:53 a.m. EDT, 4/25): On Thursday morning, the Rhode Island Department of Health confirmed that a body found in the Providence River on Tuesday is that of Sunil Tripathi.

UPDATE (11:21 a.m. EDT, 4/25): Here is an excerpt from a statement released by the Tripathi family on Thursday morning:

As we carry indescribable grief, we also feel incredible gratitude. To each one of you–from our hometown to many distant lands–we extend our thanks for the words of encouragement, for your thoughts, for your hands, for your prayers, and for the love you have so generously shared.

Your compassionate spirit is felt by Sunil and by all of us.

As these days have shown us, the media is a powerful tool to be used carefully. We hope you continue to exercise caution and treat human lives with delicacy.

This last month has changed our lives forever, and we hope it will change yours too. Take care of one another. Be gentle, be compassionate.  Be open to letting someone in when it is you who is faltering. Lend your hand. We need it. The world needs it.

We appreciate the coverage and support, but at this time, we ask for privacy for our family and for our love for Sunny.