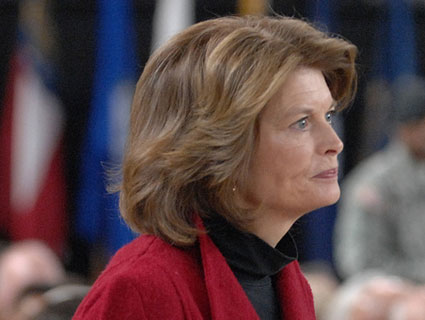 Late last year, Sens. Lisa Murkowski (R-Alaska) and Ron Wyden (D-Ore.) penned a Washington Post op-ed taking aim at Citizens United, the 2010 Supreme Court ruling that helped open the floodgates for political nonprofits spending cash in the dark to influence elections. “At minimum, the American people deserve to know before they cast their ballots who is behind massive spending, who is funding people and organizations, and what their agendas are,” the senators wrote.

Now Murkowski and Wyden have followed up by introducing a bill that would require any group that spends at least $10,000 on an election to disclose all of its donors who donated $1,000 or more. Currently, tax-exempt 501(c) groups that engage in political spending have no legal obligation to reveal their donors. (That’s not the case with super-PACs, as the AP erroneously reported, although many super-PACs skirt disclosure by accepting donations funneled through affiliated nonprofits.) Super-PACs and dark-money groups spent more than $1 billion during the 2012 election.

Murkowski first hinted she supported shining more sunlight on dark-money groups last summer when the Senate was debating the DISCLOSE Act, which is similar to her new bill. (She voted against DISCLOSE for not being strong or bipartisan enough.) Senate Minority Leader Mitch McConnell (R-Ky.) filibustered DISCLOSE twice, deriding it as “nothing more than member and donor harassment and intimidation.” His continued opposition to campaign finance reform means that the Wyden-Murkowski bill will also face a GOP filibuster.

If it managed to defy McConnell’s opposition and pass the Republican-led House, the Wyden-Murkowski bill would also enact some smaller campaign finance reforms: It would require Senate candidates to file disclosure reports directly with the Federal Election Commission so they can be posted online more quickly and replace the FEC’s quarterly reports with a real-time reporting system. And while it would require greater transparency for big donors, it would ease requirements for small donors by lifting the disclosure threshold for gifts to candidates from $200 to $1,000.