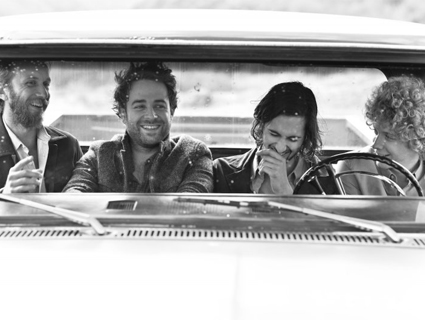 I was first introduced to Dawes on a stretch of deserted highway in 2010, following the band’s first release, North Hills. It was a fitting introduction. My production team and I were struggling to film a grueling cross-country video series, but we lost our motivation somewhere in Mississippi. Our cinematographer thankfully plugged his iPod into the van stereo and launched the opening track, “That Western Skyline.” It was soft, simple, and became a prescription for our myopia.

Now, three years later, Dawes is embarking on its own new adventure—one without a record label, where the band members are sitting behind the wheel (HUB is their own label) after a split with their old label, ATO Records.

The musicians traveled from their Los Angeles home to Echo Mountain, a church-turned-studio in Asheville, North Carolina, to record their new record, Stories Don’t End, which comes out April 9. They also switched up producers, bringing on Grammy winner Jacquire King, who has produced the likes of Kings of Leon and Tom Waits. “With this album,” bandleader Taylor Goldsmith told Rolling Stone, “we’re able to stay a rock and roll band and maintain classic qualities.” 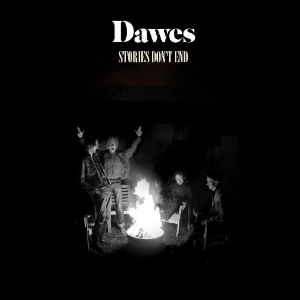 But their classic style isn’t lacking in modernity. “Hey Lover,” for instance, successfully manages a reference to one of the giants of the internet:

I never tell her when she plays a song I never heard.
Because I always learn the music and forget the words.
I want to ride with her.
I wish I sung that well.
Just copy, paste, Google search and send it to myself.

It also includes my favorite bit on the album, an unabashedly sentimental expression of a desire to start a family that’s both sweet and surprising in its brashness:

But I want to raise with you.
And watch our younglings hatch.
Fuckin’ make the first letters of their first names match.

“From A Window Seat,” meanwhile, is a bouncy piano banger that tells the story of an airplane passenger’s in-flight daydreams. Like so many Dawes creations, it tells a vivid story, places you firmly inside the mind of the main character, and motivates you to journey through Americana—by air, in this case. Listen:

Dawes created a social experience around this single, encouraging fans to tweet, using the hashtag #fromawindowseat, photos of their car and airplane views as they traveled cross-country. In the stream, you’ll find stories from places like Buffalo and Minneapolis, united by anticipation for the album’s impending release.

While Dawes’ may have a classic sound, it’s a bit early to call them classic. Even if, last Friday, the band began a tour with Bob Dylan. So if you’re yearning for a road trip, the next best thing might be checking out one of their shows. If it’s sold out (Dylan, remember), just put on Stories Don’t End and jump in the shotgun seat. Dawes will drive.