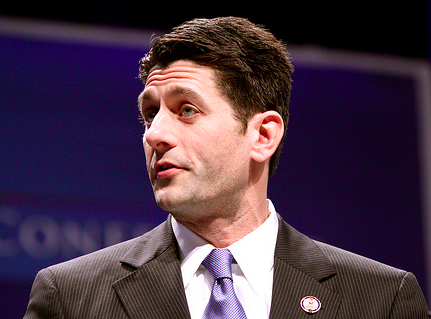 It doesn’t matter whether you have a faded Obama or Romney bumper sticker still plastered to the family car, there a few things that you probably support spending your tax dollars on: Roads, education, social security, health care, aid for the poor, and the military. You’re not unique: A recent Pew Research Center polling of about 1,500 Americans found that over 70 percent of Americans don’t want to reduce spending on these things, either. But when it comes to funding the services that Americans actually want, Republican budget plans, including the one proposed by Rep. Paul Ryan’s (R-Wis.) and rejected by the Senate last month, are far less likely than Democratic budget plans to reflect public opinion, a new study by the Center for Effective Government finds.

“Democrats seem more attuned to the public’s views on specific areas of spending,” says the report’s author, Nick Schwellenbach, a senior fiscal policy analyst for the organization. “I think the difference is due to fundamental philosophical disagreements over the role of government.”

The study examined four major budget plans, from Ryan, the Congressional Progressive Caucus, the Republican Study Committee, and Sen. Patty Murray (D-WA). Then, in a handy chart, it compared the plans with the results of the Pew poll, looking at Social Security, education, Medicare, roads and infrastructure, scientific research, military defense, health care, and aid to the needy.

According to the report, “Americans reject reductions in the vast majority of specific areas of spending” and the only area where the Ryan and RSC budgets actually aligned with public opinion was defense. Both had no plans to slash defense spending, even though waste in the Pentagon has been extensively documented (useless $380 million ballistic missile, anyone?)

Here’s a look at how the plans break down on education:

So are politicians not listening—or do Americans simply not understand the deficit, or where they want to spend their money? A McClatchy-Marist poll found last month that Americans are split on whether budget cuts will help or hurt the economy (and they prefer tax increases to cutting their favorite programs.) A poll taken by Business Insider last year (below) found that almost half of Americans also think that sequestration increases the national deficit, despite the fact that it’s an austerity measure. And as The American Prospect notes, “Voters associate high deficits with poor economic performance—the public might say that it wants more action to lower the deficit, but what it means is that it wants Washington to improve the economy.”

Schwellenbach acknowledges that “sometimes perspectives are wrong. For instance, Americans tend to think spending on foreign aid is somewhere around a quarter of the budget, when it’s closer to 1 percent.” However, he argues that when it comes to taxes, Americans’ views are spot on. “The time to pay off the debt is when the economy is back on track, as the US was doing in the late 1990s when we had budget surpluses. We can get back there, but not by doing the best we can to throw the economy back into a recession.”

Robert Reich, who served as Secretary of Labor under President Bill Clinton, argues in The Christian Science Monitor that politicians, Republicans in particular, don’t listen to their constituents when crafting budgets because politicians are more interested in their financial interests than making people happy. “The American democracy has shown itself far less responsive—and our politicians remarkably impervious—to public opinion concerning economic issues that might affect the fates of large fortunes. This is a distressing feature of our democracy, necessitating change.”