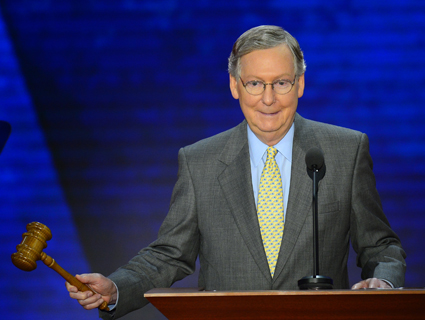 A day after Mother Jones published audio of a Louisville meeting in which Sen. Mitch McConnell (R-KY) and his campaign staff discussed opposition research on prospective challengers, McConnell campaign manager Jesse Benton has validated Godwin’s law by playing the Hitler card. In an interview with NBC News, Benton compared the leaking of the recording to Nazi Germany. “This is Gestapo-kind of scare tactics, and we’re not going to stand for it,” Benton told Michael O’Brien.

The Gestapo, who served as Hitler’s secret police from 1933 until 1945, were best known for enforcing a reign of terror typified by abductions and executions, as well as aiding and abetting genocide. That’s all quite a bit different than recording 12 minutes of a political strategy session or publishing a legally-obtained tape.

And there’s no evidence that the audio was the result, as the McConnell campaign has insisted, of a Watergate-style bugging operation. Still, that hasn’t stopped McConnell from taking the opportunity to play the victim, blasting out a fundraising pitch accusing the “liberal media” of “illegal and underhanded tactics.”

Update: Aaron Keyak, executive director of the National Jewish Democratic Council, just released this statement calling on McConnell to repudiate the use of “gestapo”:

Senator Mitch McConnell—the most powerful Republican in the Senate—must denounce his campaign manager’s inappropriate use of ‘Gestapo,’ which comes just days after Holocaust Remembrance Day. If McConnell chooses to remain silent on this matter and tolerate this offensive rhetoric, it will disrespectful to those who were murdered and abused by the actual Gestapo.