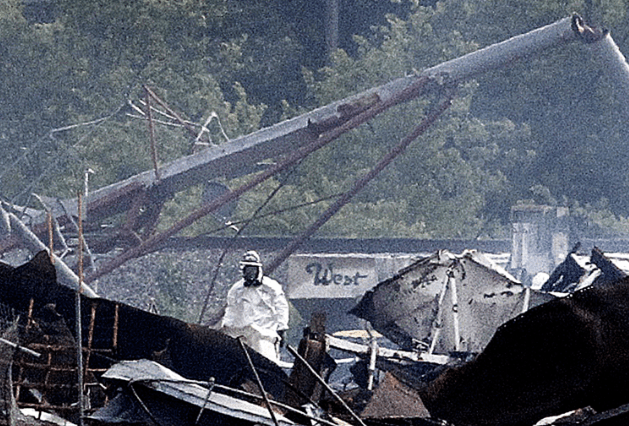 Last Wednesday’s explosion at a West, Texas, fertilizer plant, which left at least 15 people dead and more than 100 injured, was made possible by an ultra-lax state and federal oversight climate that make inspections of such facilities all but a rubber-stamp process—when they even happen. If the chemical lobby and its allies in Congress get their way, a regulatory process dismissed by environmental activists and labor unions as extremely weak would be watered down even more.

In February, 11 congressmen—10 Republicans and one Democrat—joined some two dozen industry groups, including the Fertilizer Institute, the American Chemistry Council, and the International Institute of Ammonia Refrigeration, to back the General Duty Clarification Act. The bill is designed to sap the Environmental Protection Agency of its powers to regulate safety and security at major chemical sites, as prescribed by the Clean Air Act.

“We call that the Koch brothers bill,” Greenpeace legislative director Rick Hind says, because the bill’s sponsor, GOP Rep. Mike Pompeo, represents the conservative megadonors’ home city of Wichita, Kansas. (The sponsor of the sister legislation in the senate, GOP Sen. Pat Roberts, represents the Kochs’ home state of Kansas.) The brothers have huge investments in fertilizer production, and Hind thinks they’ll ultimately get what they want, whether or not the bill becomes law. “It’s not necessarily intended to achieve legislative passage—it’s more about intimidation of a beleaguered agency.”

The fight over fertilizer and the Clean Air Act has its origins in the passage of the law back in 1990. Although the original bill included language that would have permitted the EPA to regulate the emissions of ammonia and hydrogen sulfide—both of which are important ingredients and fertilizer manufacturing—a fierce lobbying push from the fertilizer industry resulted in the compounds being stricken from the formal list.

But battle intensified after 9/11, when President George W. Bush’s EPA director, Christine Todd Whitman, decided to take on what was seen as a serious security threat. Whitman, the moderate former New Jersey Republican governor, was working with Secretary of Homeland Security Tom Ridge on a plan to regulate chemical plants, which were considered uniquely vulnerable to terrorist attacks. Whitman believed the law already empowered the agency do that, but she and Ridge sketched out legislation that would expand that authority and put aside any ambiguity.

“These things don’t happen all of a sudden. Every accident that I’ve looked at in industrial plants, it was like, ‘Hey, you’ve got a ticking time bomb there.'”

“They were all set to announce that publicly and the White House yanked it,” recalls Paul Orum, a chemical safety consultant for the Blue Green Chemical Security Coalition. Philip Perry, Dick Cheney’s son-in-law, and at the time the general counsel for the White House Office of Management and Budget, told her his bosses would never let any such legislation pass. In her 2005 book, It’s My Party Too, Whitman places the blame squarely at the feet of the American Chemistry Council, which she chides for its “extremism and closed-mindedness.”

Whitman was rebuffed. Her powers were instead transferred through a 2007 budget deal to DHS, which was (and is) considered to be less concerned with things like environmental impacts or workplace standards. She resigned in 2003. Legislation designed to improve safety at chemical plants was introduced in the Senate in 2006, but blocked by Republicans.

But there was another interpretation of the Clean Air Act. As the thinking went, a provision of the law (section 112-R) already authorized the EPA to monitor and regulate chemical plants. Manufacturers were obligated to study the worst-case scenarios of a major accident or attack, and assess the consequences such incidents would have on workers and nearby residents. But most importantly, the agency had the power to make new rules as necessary. Environmental groups and labor unions had long supported this interpretation, but it was dead as a doornail during the remainder of the Bush Administration. Last year, Whitman pushed Lisa Jackson, President Obama’s EPA administrator, to act unilaterally. “This is the right thing to do, and it is a step that the E.P.A. could take right now,” she argued in a New York Times op-ed.

The fertilizer industry, along with its allies in the agriculture and chemical industries, was less than pleased. Last June, Reps. Fred Upton (R-Mich.), Ed Whitfield (R-Ky.) and John Shimkus (R-Ill.) wrote a letter to Jackson protesting the proposal to regulate chemical plants. “[W]e do not support the use of the accidental release prevention provisions of the Clean Air Act to address site security from terrorist attacks at chemical facilities,” they wrote.

Their argument was a simple one: If a report detailing the safety and security weaknesses of a chemical facility fell into the hands of a terrorist, it could become a magnet for a future attack. But it was also something of a red herring. Industry groups and their congressional allies have opposed using section 112-R to crack down on chemical plants long before fears of Al Qaeda had gripped the Capitol. It also rested on a logical fallacy—the point of the safety regulations was to force manufacturers to shore up the workplace so that there wouldn’t be any obvious weaknesses to exploit.

Later that year, they introduced a bill to formally prohibit the EPA from using the Clean Air Act to regulate security and safety at chemical production and storage sites, by mandating that any such inspections be carried out by the Department of Homeland Security instead. Their bill also left it up to manufacturers to determine whether or not to make improvements to the safety of their workplace. In February, Pompeo introduced the General Duty Clarification Act of 2013, a repeat of the 2012 bill, with 10 Republican cosponsors—and one Democrat, Rep. Jim Matheson of Utah. The bill was backed by some of the nation’s most powerful lobbying groups, including the US Chamber of Commerce.

“Dividing safety and security has been a game that the chemical industry has tried to play for many years,” Orum says. “That’s the point of the Pompeo bill—divide safety from security. But they’re not separable.”

In the meantime, advocates for greater oversight of America’s great unregulated fertilizer facilities hope that maybe, just maybe, the explosion in West will be enough of a wake-up call to get Congress and the EPA to finally act.

“Most of these things are human error,” says Neil Carman, clean air program director at the Sierra Club’s Austin chapter and a former investigator at the Texas Commission on Environmental Quality, which inspects plants like West. “These things don’t happen all of a sudden. Every accident that I’ve looked at in industrial plants, it was like, ‘Hey, you’ve got a ticking time bomb there.'”