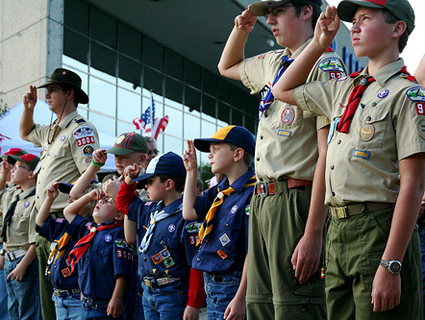 While the nation’s attention was turned to Boston on Friday morning, the Boy Scouts of America announced that it intends to end its ban on gay members, as long as its board approves the change. The organization would still, however, prohibit gay adults from serving as troop leaders or volunteers.

The proposed new policy states, “No youth may be denied membership in the Boy Scouts of America on the basis of sexual orientation or preference alone.” The proposed policy also reinforces the organization’s position that “Scouting is a youth program, and any sexual conduct, whether homosexual or heterosexual, by youth of Scouting age is contrary to the virtues of Scouting.” You can read the proposal here, or the media statement here.

The change would apply only to members; it does not change the policy regarding gay troop leaders or other volunteers. “The BSA will maintain the current membership policy for all adults,” Deron Smith, the group’s spokesman, told Mother Jones via email.

BSA’s long-standing ban on gay members has been a huge source of controversy. In January, the group announced that it was considering whether to allow individual troops to admit gay members but put off making a decision until May. As my colleague Dana Liebelson has reported, the group lost some major funders because of the gay ban. Most recently, a number of high-profile musical acts ditched the Boy Scouts’ annual Jamboree for this reason.

If the Scouts’ 1,400-member board approves the change at its annual meeting in May, it would take effect January 1, 2014.