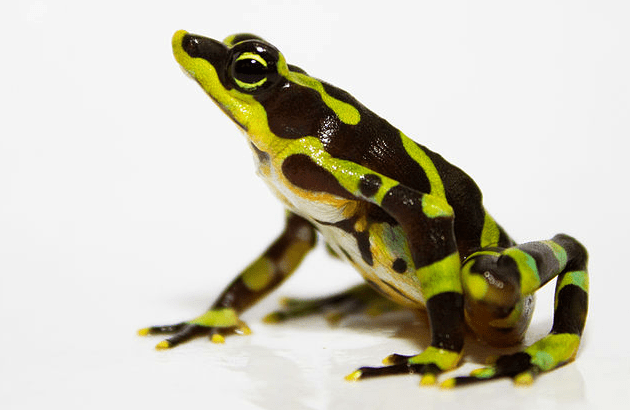 Great news today that the endangered limosa harlequin frog (Atelopus limosus) has been bred in captivity for the first time. This unbelievably groovy-looking character is native to the tropical lowland forests of eastern Panama. Six partner organizations forming the Panama Amphibian Rescue and Conservation Project have been caring for 65 adult limosa harlequin frogs, including:

“These frogs represent the last hope for their species,” says Brian Gratwicke (see him in the the video below), international coordinator for the project and a research biologist at the Smithsonian Conservation Biology Institute, one of the six project partners. “This new generation is hugely inspiring to us as we work to conserve and care for this species and others.”

The limosa harlequin frog is deemed “Endangered” on the IUCN Red List because:

[I]ts Extent of Occurrence is less than 5,000 km2 (1,930 square miles), its distribution is severely fragmented, and there is continuing decline in the extent and quality of its forest habitat in Panama.

It’s also a victim of the fungal disease, chytridiomycosis, caused by the water-borne pathogen, Batrachochytrium dendrobatidis (Bd). This worldwide amphibian plague is a real terror. From Amphibiaweb:

Bd may be responsible for the greatest disease-caused loss of biodiversity in recorded history. Over just the past 30 years, Bd has caused the catastrophic decline or extinction (in many cases within a single year) of at least 200 species of frogs, even in pristine, remote habitats. These rapid, unexplained declines have occurred around the world. Recently Bd has been implicated in the unexplained disappearances of Central American salamanders as well. While diseases have previously been associated with population declines and extinctions, chytridiomycosis is the first emerging disease shown to cause the decline or extinction of hundreds of species not otherwise threatened. Currently over 350 amphibian species are known to have been infected by Bd.

It’s still up for scientific debate whether the lethal explosion of chytridiomycosis worldwide is a result of:

Whatever the ultimate cause(s), nearly a third of Earth’s amphibian species are now at risk of extinction.

The mission of the Panama Amphibian Rescue and Conservation Project is to rescue amphibian species that are in extreme danger of extinction throughout Panama. They’re focused on establishing assurance colonies and developing methodologies to reduce the impact of the amphibian chytrid fungus so that one day captive amphibians may be reintroduced to the wild. Current project partners include Cheyenne Mountain Zoo, Houston Zoo, Smithsonian’s National Zoological Park, Smithsonian Tropical Research Institute, and Zoo New England.