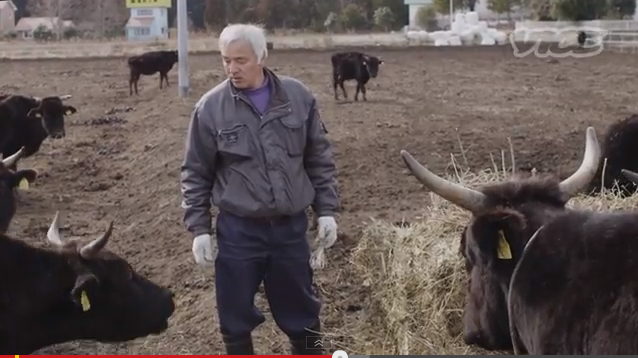 Naoto Matsumura, a 53-year-old fifth-generation rice farmer, returned to his contaminated home near Japan's Fukushima power plant to care for his cows:Courtesy of <a href="http://www.vice.com/read/radioactive-man-japan">VICE</a>.

Let our journalists help you make sense of the noise: Subscribe to the Mother Jones Daily newsletter and get a recap of news that matters.
UPDATE: Many of you asked where to donate to help Naoto and the animals he’s caring for. VICE told me this: “This is the NPO organization that Naoto and his supporters run: http://ganbarufukushima.blog.fc2.com/. It’s a Japanese website but on the middle-left there is donation information in English.”

This 18-minute video by VICE Japan profiles Naoto Matsumura, a 53-year-old fifth-generation rice farmer who went back into the dead zone around Japan’s Fukushima nuclear power plant to take care of his cows (and pigs, cats, dogs, and ostriches), and then stayed there. If you’re wondering why anyone would live in a place with >17 times normal radiation, Naoto, in the video, explains his rationale on moral grounds. Including this:

Our dogs didn’t get fed for the first few days. When I did eventually feed them, the neighbors’ dogs started going crazy. I went over to check on them and found that they were all still tied up. Everyone in town left thinking they would be back home in a week or so, I guess. From then on, I fed all the cats and dogs every day. They couldn’t stand the wait, so they’d all gather around barking up a storm as soon as they heard my truck. Everywhere I went there was always barking. Like, ‘we’re thirsty’ or, ‘we don’t have any food.’ So I just kept making the rounds.”

As for the filmmakers, Ivan Kovac and Jeffrey Jousan, here’s some of what they had to say:

The radiation dosage per hour inside Naoto’s house, as measured by the Geiger counter we brought with us, is two microsieverts per hour, and outside our reader spiked to seven microsieverts. When we asked Doctor Hiroyuki Koide at the Kyoto University Research Reactor Institute how bad this was for Naoto, he said, “Japanese law states that any location with an hourly dosage exceeding 0.6 microsieverts [per hour] should be designated as a radiation-controlled area and closed off to the general populace. Once inside a radiation-controlled area you can’t drink the water, and you really shouldn’t eat anything. It’s inconceivable to me that a normal person could live there.”

All of the other ~15,000 residents of Naoto’s town still live in shelters—except for Naoto and his animals. And they’re not going anywhere, say the filmmakers.