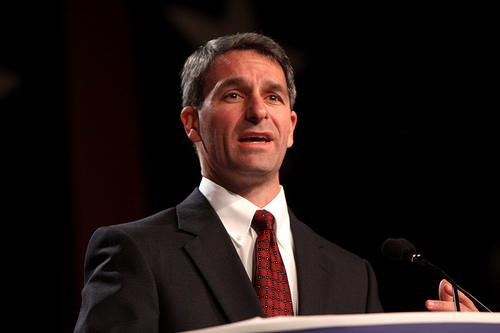 Virginia Attorney General Ken Cuccinelli, who is running for governor this year, has a knack for controversy. He told state colleges they couldn’t include “sexual orientation” in their anti-discrimination policies. (Current Gov. Bob McDonnell assured the academy that no discrimination was tolerated.) He led a witch hunt against prominent climate scientist Michael Mann. (Cuccinelli is a climate change denier.) He requested that the exposed left breast of Virtus, the Roman goddess adorning the state’s two-century-old seal, be brought in from the cold. (“Breastgate,” the affair was called.)

And now, the latest addition to the Cuccinelli canon. On Tuesday, Virginia Democrats released a video of Cuccinelli comparing the fight to end slavery to the anti-abortion movement. “Over time, the truth demonstrates its own rightness, and its own righteousness,” he said. “Our experience as a country has demonstrated that on one issue after another. Start right at the beginning: slavery. Today, abortion.”

Here’s the video, taken by a Democratic tracker in June 2012:

Cuccinelli added: “History has shown us what the right position was, and those were issues that were attacked by people of faith aggressively to change the course of this country. We need to fight for the respect for life, not just for life but for respect for life. One leads to the other.”

A Cuccinelli spokeswoman told the Associated Press the release of the video was an effort by Democratic gubernatorial candidate Terry McAuliffe, the former head of the Democratic National Committee, to “run a contentious campaign that divides Virginia.”