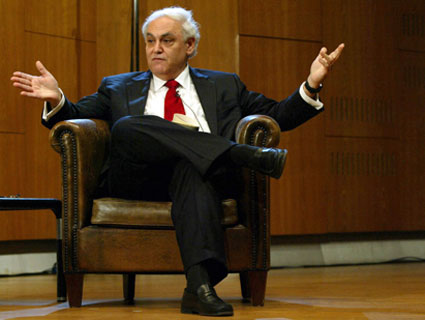 The past week has brought about a 10-years-after review of the Iraq war—particularly an examination of how the Bush-Cheney administration sold the war prior to the invasion launched on March 19, 2003. Pundits and politicians have relived those days—and somberly reconsidered the run-up to the war, the role of the media in enabling the swindle, and the consequences of that military action. MSNBC has aired a documentary based on the book I cowrote with Michael Isikoff, Hubris: The Inside Story of Spin, Scandal, and the Selling of the Iraq War. Showtime featured a documentary on Dick Cheney that centered on the war. The Watson Institute for International Studies at Brown University released a study noting that the war cost US taxpayers $2.2 trillion and consumed the lives of 4,488 members of the US armed services and at least 123,000 to 134,000 Iraqi civilians.

One of the most shocking reactions to the anniversary came—perhaps no surprise—from one of the leading neoconservative drum majors for the war, Richard Perle. As a member of the Defense Policy Board advisory committee, Perle, who had been a hawk’s-hawk assistant secretary of defense during the Reagan years, began calling for war in Iraq nanoseconds after September 11. He told CNN, “Even if we cannot prove to the standard that we enjoy in our own civil society they are involved, we do know, for example, that Saddam Hussein has ties to Osama bin Laden. That can be documented.” In 2002, he suggested a war against Iraq would be a cakewalk: “It isn’t going to be over in 24 hours, but it isn’t going to be months either.” He asserted Saddam was “working feverishly to acquire nuclear weapons.” He claimed the post-invasion reconstruction in Iraq would be self-financing. He got everything wrong.

On Wednesday morning, NPR’s Renee Montagne interviewed Perle. It wasn’t a grilling. Perle was allowed to explain his Iraq war fever, noting that “we had intelligence assessments” indicating Iraq possessed weapons of mass destruction. He pleaded his case by remarking that after 9/11, “You ask yourself what could happen next, you do the obvious thing….[The Bush administration] made a list of potential threats and on that list the single most important potential threat was another attack with a weapon of mass destruction. So then you make a list of who has weapons of mass destruction and who might be motivated either to attack or enable someone else to attack the US. And Iraq was clearly on that list.” Perle then offhandedly observed, “It’s easy a decade later to say, well, it turned out this fact or that presumption was wrong.” He insisted that the biggest “blunder” with Iraq was the post-invasion occupation.

This is all standard fare for a neocon who won’t let go. But the final exchange of the interview was a chilling driveway moment:

Montagne: Ten years later, nearly 5,000 American troops dead, thousands more with wounds, hundreds of thousands of Iraqis dead or wounded. When you think about this, was it worth it?

Perle: I’ve got to say I think that is not a reasonable question. What we did at the time was done with the belief that it was necessary to protect this nation. You can’t a decade later go back and say we shouldn’t have done that.

That was cold. In the Showtime documentary, Cheney predictably expresses no regrets, saying, “I did what I did. It’s all on the public record, and I feel very good about it. If I had it to do over again, I’d do it in a minute.” Yet here is Perle going beyond no regrets to deny it is even worthwhile to consider the human costs of the war when assessing the decision to invade Iraq. His comment is modern-day Strangelove and yet another reason he deserves the nickname he earned in the 1980s: the Prince of Darkness. What transpires within Perle’s soul, ultimately, is not all that important. The true tragedy is that anyone would seek—let alone heed—the advice of a man so averse to considering a basic (and moral) calculation.