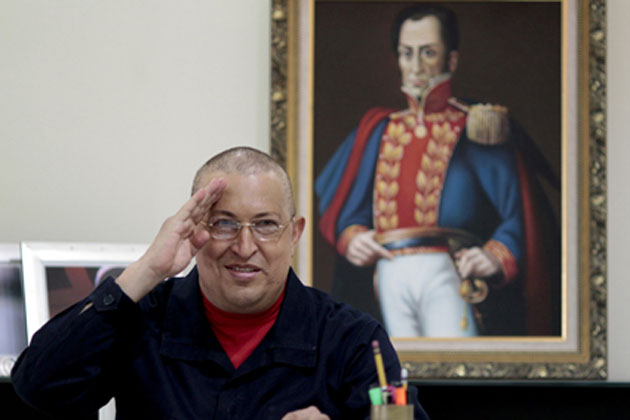 Chávez, pictured here in August 2011, had his first cancer treatment in June of that year.Miraflores/Handout/DPA/ZUMAPress.com

Hugo Chávez, the firebrand president of Venezuela who has battled cancer since 2011, died Tuesday in Caracas. He was 58 years old.

Vice President Nicolás Maduro announced Chávez’s passing in a radio and television address, saying that the 14-year president died at 4:25 p.m. local time. Just hours earlier, Maduro had told the media that the socialist president was entering “his most difficult hours” due to a new, severe respiratory infection.

Chávez was last seen in public on December 10, when he traveled to Cuba two months after his latest reelection for his fourth cancer surgery in 18 months. Rumors about his health—indeed, whether he was still alive—persisted. His Twitter account, @chavezcandanga, sent a trio of tweets on February 18, after several months of silence. His last tweet read:

(Loosely translated: “I’m still holding on to Christ and trust in my doctors and nurses. Until victory forever!! We will live and we will triumph!!!”)

A former paratrooper who spent two years in prison after a failed coup in 1992, Chávez took office in 1999, fought off a coup attempt in 2002 and a recall referendum in 2004, and was reelected three times, including in October, when he claimed himself healthy enough for another term. He gained fame for using Venezuela’s vast oil revenues to fund his anti-poverty social programs—and for his fiery, anti-imperial rhetoric. He also rubbed plenty of people the wrong way—on both ends of the political spectrum—with his strongman tendencies, his rewriting of the country’s constitution, and his alliances with the likes of Iran’s Mahmoud Ahmadinejad.

Maduro will take power until an election takes place within 30 days. He is likely to face Henrique Capriles Radomski, the Miranda state governor whom Chávez beat just months ago.

UPDATE, March 5, 3:33 PT: The New Yorker‘s Jon Lee Anderson, who first profiled Chávez in 2001 and long had great access to him, just posted an obituary. Read it.