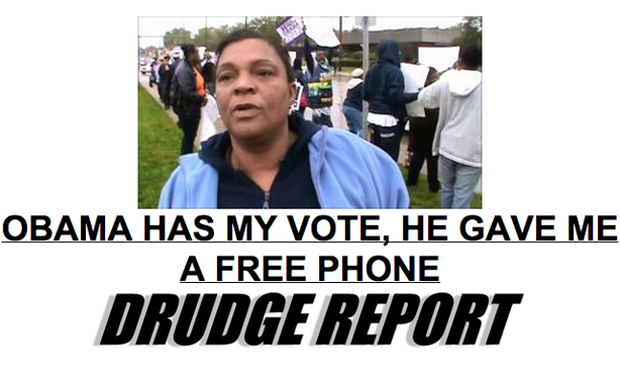 You're the racist for thinking this is racist.Drudge Report

The low point of the 2012 presidential election may have come on September 27th, when Matt Drudge linked to a YouTube video of a somewhat-crazy-sounding black woman from Ohio explaining that she was voting for President Obama because he gave her a free phone. The conservative blogosphere (and conservative cable news, and conservative syndicated columnists, and conservative talk radio) blew up.

The shocking truth: Obama hadn’t really given the woman a free phone. It was a product of a Reagan-era program called “Lifeline,” which grants a subsidy to phone service providers in order to ensure that the very poor—those at 135 percent of the poverty line or below—have some way of dialing out in case of emergencies. Under President George W. Bush, that service expanded to cell phones.

But Congress being today’s Congress, there’s now a push to deep-six the Lifeline program. Rep. Tim Griffin (R-Ark.), who introduced a bill in 2012 to scale back the program, announced some progress on Tuesday:

Thanks to @michelebachmann for cosponsoring my bill to end the government’s free cell phone program! griffin.house.gov/lifeline #ar2 #Lifeline

As Griffin explains on his congressional website, “[D]ead people are receiving free cell phones in the mail, eligible and ineligible individuals are obtaining more than one, and electronic kiosks have been stationed in convenience stores to spread the word about this ‘free’ opportunity.” To some extent, he has a point; there was a lot of fraud and abuse within the Lifeline program. But as Factcheck.org noted last year, Griffin ignored the fact that the feds were already reining in the Lifeline program—and the phone companies that exploited it:

The FCC, however, overhauled the program in February, enacting changes that call for building databases to confirm beneficiaries’ eligibility and to identify duplicate subscriptions. The FCC also slashed 75 percent of available subsidies for the program, which eliminated a “perverse” incentive for some phone companies to enroll ineligible persons. The FCC projects its modifications will save up to $2 billion over three years.

So: Obama isn’t giving everyone free phones. The FCC is already fixing the program. A viral right-wing meme is wrong—stop me if that sounds familiar.