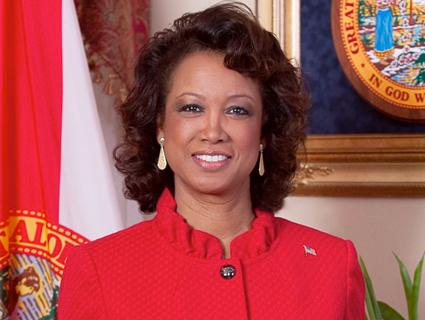 On Tuesday, state authorities questioned Florida’s first African American female lieutenant governor, Republican Jennifer Carroll, as part of a massive criminal probe against the operator of dozens of gambling outlets in the state. By Wednesday morning, Carroll had announced she was resigning, and embattled tea party Gov. Rick Scott was hurtling into a contentious legislative session—and a 2014 reelection fight—without a deputy.

We don’t know yet whether Carroll, 53, is implicated in the criminal probe. But her involvement with the investigation’s target raises myriad questions about her activities as a onetime legislator and Florida’s No. 2 executive—activities that included guiding defense contracts in the state and reviewing its controversial “Stand Your Ground” self-defense law last year. It adds to the grief of a state Republican Party already riven by infighting and corruption charges. And it shines a light on some seriously weird longtime ethical practices by legislators in Tallahassee.

Carroll’s troubles stem from an investigation into Allied Veterans of the World, a nonprofit that claims to benefit vets’ causes, but which authorities charge was a laundering front for hundreds of millions in proceeds from quasi-legal storefront gambling dens. Allied Veterans raised red flags after it went from reporting a $4,331 tax loss in 2009 to doling out more than $1 million to vets the following year, but investigators say the real numbers were far more staggering than that: Allied Vets raked in more than $290 million since 2007 from its operation of “internet cafes”—shops that claimed to offer web access for paying customers, but were in fact havens for gamblers to fork over cash and play computerized games of fortune. Of that haul, the nonprofit reportedly donated $6 million, or about 2 percent, to charitable causes. By Thursday morning, officials across several states had arrested 57 people connected to Allied Vets on charges that included racketeering and illegal gambling.

Allied Vets’ success appears due in part to Carroll’s patronage. While a state representative in 2009 and 2010, she ran a consulting firm that represented Allied Vets, and she sponsored a bill legalizing internet casinos. (Carroll later withdrew the bill from consideration.) She continued to support Allied Vets after Scott chose her as a running mate in 2010, appearing in an ad for the nonprofit.

In an email statement announcing her resignation, Carroll insisted she had done nothing illegal, but was leaving office to avoid sinking Scott’s agenda. “Although I do not believe I or my company are targets of the investigation, I could not allow my company’s former affiliation with Allied Veterans to distract from the administration’s important work for the families of Florida,” she wrote. Scott echoed this in the only public statement he’s made: “I have no knowledge that she broke the law.” See the full video below:

If Carroll’s behavior—profiting while in the Legislature by freelance consulting for a firm that stood to gain from legislation she’d introduced—is legal, it still raises serious questions about the partiality of her public policy work. How closely might she coordinate with groups that have a financial interest in her work, and what impact did that have on her decisions? Last year, I saw firsthand how Carroll worked hand-in-glove with military contractors as a key member of the state’s Defense Support Task Force, shooting down Osama bin Laden in an F-35 cockpit simulator and cheerleading for defense dollars to pour into Florida; more recently, after the shooting death of Trayvon Martin, Carroll headed the state committee that reviewed Florida’s radically permissive “Stand Your Ground” self-defense law…and concluded, along with gun lobbyists, that the law worked fine.

Why is it legal for legislators in Florida to make big bucks by consulting while they’re legislating?

Carroll’s involvement with Allied Vets raises a larger question: Why is it legal for legislators in Florida (and elsewhere) to make big bucks by consulting while they’re legislating? Elected state officials are part-timers, working only a single 60-day legislative session each year, meaning they’re given great leeway to do outside work. That “creates a situation that forces elected officials to serve two masters: the people who elected them, and the employers who employ them,” recently elected Democratic state Sen. Jeff Clemons, who sits on the ethics committee, told the Palm Beach Post. “If you are employed as an insurance agent, or with a trial attorney, a bank, or as a teacher, you may often be put in the position of having to choose between your employment (feeding your family) and what is best for your constituents.” The result, he argues, is “bad government.”

Clemons would like to see Florida’s Legislature become a full-time vocation, but that wasn’t included in the ethics bills that just sailed through the Senate last week—though the body did vote to restrict the sort of consulting jobs legislators could do in their free time. Will even that meager reform make it through the House and past Scott’s desk? L’affaire Carroll probably helps its chances. But, as state Sen. Jack Latvala (R-Clearwater), chairman of the ethics committee, said on the Senate floor: “A lot of this wouldn’t be necessary if everyone elected to office conducted their lives and themselves just using a little common sense.”

Scott, whose state ranks among the worst in public services and who’s one of the least popular politicians in America, may already have sought an excuse to jettison Carroll and trade up before his bruising reelection effort next year. Although Scott had hoped picking Carroll might help establish his pro-diversity credentials (one local TV anchor called it “pulling a John McCain“), her tenure’s been marked by bizarre statements, as when she argued that liberals hate Jesus and dismissed allegations that she’d had a lesbian affair by insisting “black women that look like me don’t engage in relationships like that.”

But even if Scott can avoid fallout from Carroll’s flap—he was helped Wednesday by the selection of a new pope, which dominated news headlines—he’ll have a harder time escaping the shadow of the state Republican party, which has been mired in rivalries and recriminations since his superstar predecessor, Charlie Crist, jumped ship to the Democrats, and GOP chairman Jim Greer was thrown in jail for skimming party money…and started naming names.

In Scott’s video statement above, he brushed off reports that the Republican Party of Florida took $25,000 from Allied Vets to help pay for his inaugural parties in 2011. Later, asked what qualities he wanted in his next lieutenant governor, he thought for a moment. “You want somebody that can do the job. Somebody that can do the right thing for the state of Florida,” he said. Thanks to a series of missteps—including, now, his first choice of a lieutenant—Scott and his Republican brethren will have to work much, much harder to convince voters that they can do the right thing.