This story was produced in partnership with Tumblr Storyboard.

It began with a trip back home, to a small town in the country’s western valley, to visit his dying grandmother. More than a decade after El Salvador’s bloody civil war had ended, Juan Carlos, a 38-year-old photojournalist, wanted to see how life had changed. Was his country, one of the most violent in the Western Hemisphere, better off after 12 years of war? Sure, there were shiny new roads and malls, but was the country any safer? 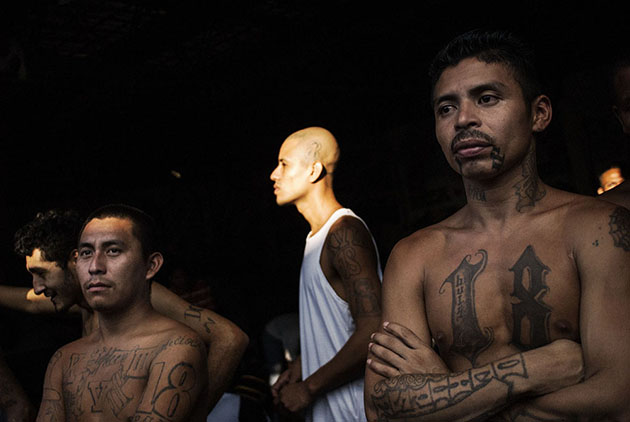 Juan Carlos began by documenting infrastructure and families, education and health systems, traveling for long stretches between El Salvador, where he was born, and San Francisco, where he now lives. But it didn’t take long for a new focus to emerge: the gang culture, and accompanying terror, that had seeped into the fabric of everyday Salvadoran life. With an estimated 64,000 identified gang members, El Salvador’s street gangs—or maras, as they’re known to locals—operate like armies. They control neighborhoods, and can stop buses from running. They hold press conferences. They are incestuously intertwined with the police. In other words, they call the shots—as well as fire them. At its peak, in 2009, the gangs were responsible for a homicide rate that reached 14 deaths per day.

Last March, however, the country’s two most violent gangs—Mara Salvatrucha (MS-13) and Barrio 18—suddenly declared a truce. In exchange for better prison conditions—and the transfer of gang leaders to a less-restrictive facility—the two armies agreed to halt the violence. Since then, El Salvador’s official homicide rate has plummeted by more than 60 percent; in April, the country of 6 million saw its first day without a single murder in years. “This is an opening,” a former gang member said at the time, “part of a peace process that we have been pushing for years.”

And yet, one year into the truce, the reality of life in El Salvador isn’t quite so simple. Sure, the killings have abated, but extortion, theft, and drugs remain rampant. Reports of missing persons have skyrocketed since the truce began, and mass graves have cropped up all over the countryside. On Tuesday, a prominent social worker, a former gang member who had helped broker the truce, was shot point blank in front of the social-service center where he worked. For locals who’ve grown used to gang warfare as part of daily life, the reality is clear. “We leave our home and don’t know if we are going to come back,” as one put it.

In partnership with Mother Jones, Tumblr commissioned a series of portraits from Juan Carlos to show what life is like in his home country. The images offer a comprehensive view of life in El Salvador after the truce, from inside overcrowded prisons to the plight of residents haunted by memories disappeared. Tumblr’s Jessica Bennett spoke with the photographer about the project—called Truce In and Out—as well his newly launched blog and website. 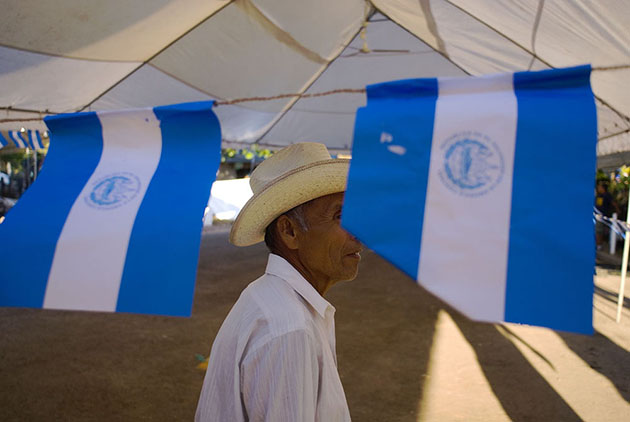 More than 20 years after the Chapultepec peace accords brought an end to El Salvador’s civil war, the country is still wracked by violence, now generated by gangs born out of the 12-year conflict and fueled by deportations from the United States.

Jessica Bennett: You’ve documented the war in Iraq, the earthquake in Haiti, and New Orleans post-Katrina. Why go back to your home?

Juan Carlos: In my opinion, photography is a responsibility. There are so many stories here that aren’t told by mainstream media: gangs, violence, an area contaminated by lead by a factory that manufactured car batteries. I wanted to document my country and see what postwar El Salvador was about. Were we better off? What did the war accomplish? Did we become a better country?

JB: I take it the gangs were impossible to ignore in that equation.

JC: It got to a point where it was just everywhere, all around you. So I decided to take a deeper step into documenting the violence. I’m from a small town in the western part of El Salvador, and in 2008, there were about eight killings in a single day—just in that town. In other places, when photographers document crime, they go on patrols with ambulances or police. But I would just walk down the street. I walked into a crime scene where a kid had just been shot in the head, right outside a bakery where I was buying bread. Another time, a cousin told me, “Hey, a guy just got shot in the park.” I went, and there was a bench full of blood. This kind of thing was happening all the time. I would be walking down the street and just: boom. 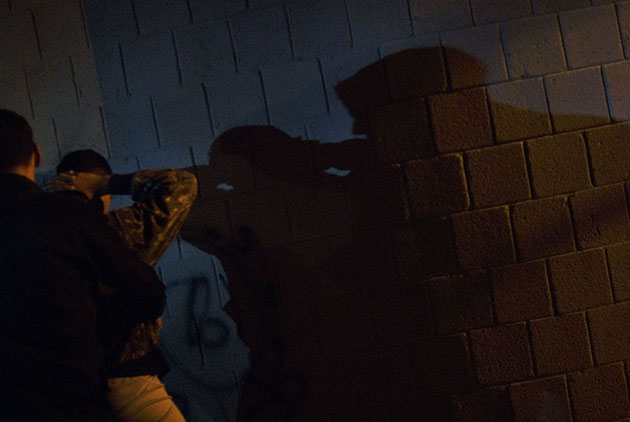 Police search a teenager in the streets of San Salvador. Officers regularly stop and search teenagers without probable cause, creating antagonism between the police and the people they are meant to protect.

JB: You were a child during the first years of El Salvador’s civil war. Is the experience of gang life similar?

JC: You know, I was a small child during the war, but you’d wake up to the sound of gunshots. And the bodies. You’d wake up and there would be bodies on the road or the street—somebody killed the night before. It’s the same thing here: You still find bodies on the side of the road, mass graves, and disappeared. History is repeating itself—but for very different reasons.

JB: What’s it like being around all that death?

JC: It’s troubling, because you are always in that mode that something could happen to you. And sadly enough, that’s how Salvadorans would wake up, thinking “I could die today,” just like saying, “I’ve got to brush my teeth.” Psychologically, it’s stressful. Because normal things like taking a walk in a park become difficult. The violence is all around you. Salvadorans will tell you, that’s always in their mind. They never know what’s going to happen. That’s the thing—this isn’t just physical violence, this is psychological violence. It’s this feeling that something is going to happen to you, or that you can’t defend yourself, because you’re going to end up dead.

JB: What about the police?

JC: It became popular—gang members even write it on the wall—the saying: “See, Hear, Shut Up.” The culture has become that people don’t speak up, because they feel there’s no protection. You can’t even call the police, because there are informants in the police department. So there’s no trust. There’s nobody to turn to.

JB: But has the truce helped?

JC: The numbers have dropped. But in my opinion, a society that still has five or six murders per day is not a healthy society. Now you find more bodies on the side of the road in plastic bags; you find people just disappeared, or in mass graves. So what’s happening—or, at least, what many people believe is happening—is that the government is manipulating the numbers. They just found two girls who’d been missing since October, chopped into pieces. Yeah, we have fewer murders. But you still have extortion, and gang leaders—every time they have a press conference—can’t give a straight answer about when they’re going to stop. The crime may be down, but the fear is still there. 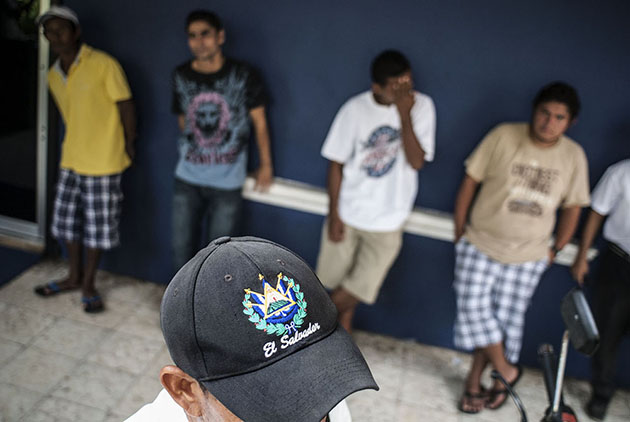 Elmer, a 21-year-old resident of La Libertad, attends an event declaring his hometown a sanctuary city, free of gang violence. 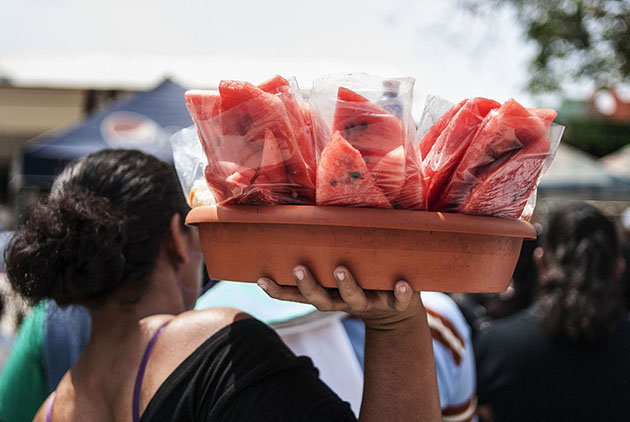 Street vendors and small business owners are often extorted by the gangs. 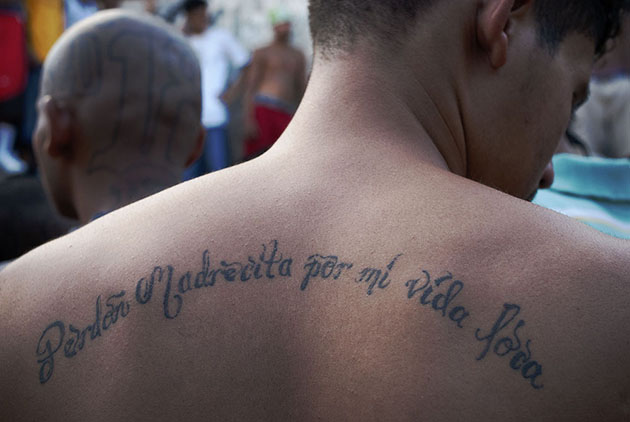 This inmate’s tattoo says “forgive me mother for my crazy life.” The gang truce took hold after a series of dialogues between imprisoned leaders of Ms-13 and Barrio 18, facilitated by Archbishop Fabio Colindres and former guerrilla commander Raul Mijango.

JB: It’s crazy to hear you say that gangs hold press conferences. For people who don’t know, how much power do gangs have?

JC: They have more power than the authorities. If you want to have a business, you pay them. They infiltrate the police: Gang members become policemen, and policemen become gang members. They have the power to stop people from doing the simplest things—like going to work—to make demands on the government. Pretty much they’re in charge.

JB: What do you think it would take solve the problem?

JC: People say, you know, just burn down the prisons—because that’s where all the gang leaders are housed. But that is not the answer. It’s more complicated. We’ve got to educate both sides. We’ve got to focus on prevention. The problem will never just go away. It’s like saying, “Let’s get rid of gangs in LA.” We’re not going to do that. But we can bring the numbers down. We can focus on prevention, and outreach to the new generations. Because all these young generations are growing up with all this violence, and what’s going to happen? Boom, they’re going to fall into that. That happens in any place where this is a problem, and it’s no different here. 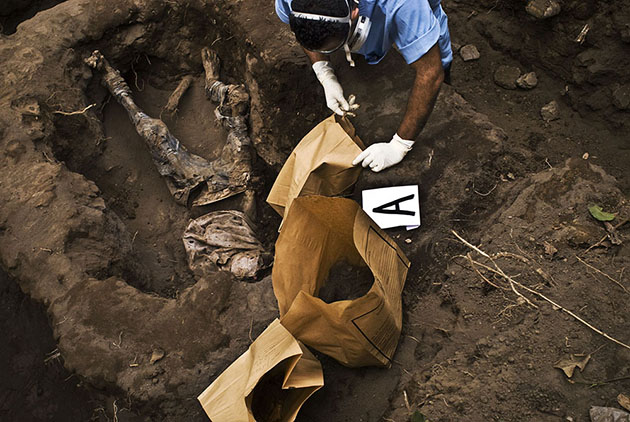 Mass graves have become a common way for gangs to hide their murdered victims. In this grave found on the outskirts of Lourdes, evidence is gathered from a decomposed female body. The tip that revealed the site concerned a missing man; investigators have not been able to identify the second set of remains. 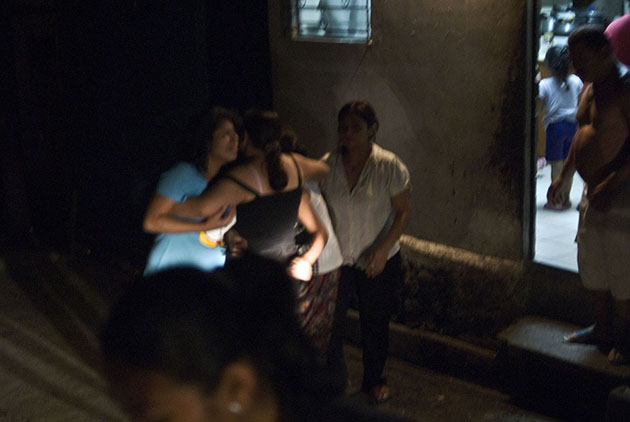 Family members grieve the deaths of two men who were shot while eating dinner. El Salvador’s murder rate has dropped from 14 to 6 per day since the truce, but police believe that many of these homicides are still gang related. The men lived in a community controlled by MS-13. 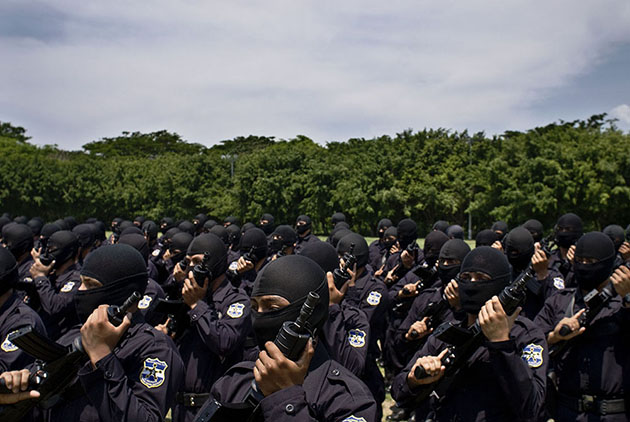 A commencement ceremony for the country’s first anti-gang police unit; their training was already underway when the truce began. The unit has won praise for capturing dangerous gang members and leaders. 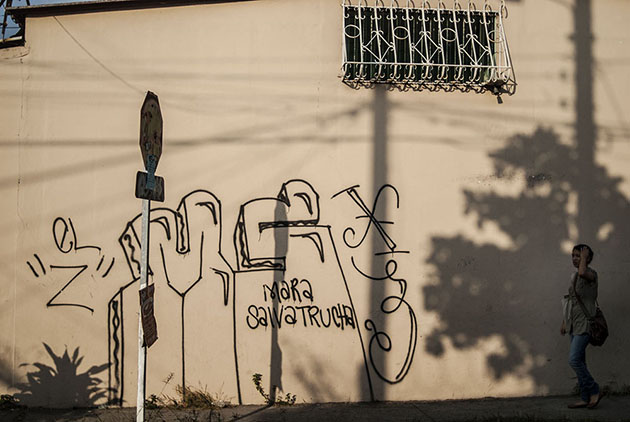 Many communities live under gang control—and it’s no longer just a problem of marginalized areas: working-, middle-, and even some upper-class areas are being affected. 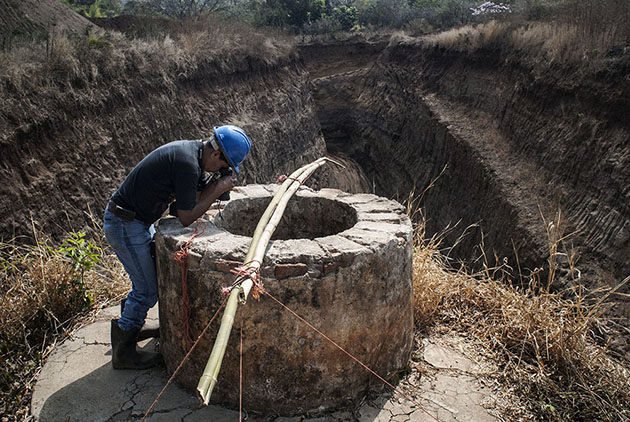 Israel Ticas, a forensic criminologist, looks at the bottom of a well holding more than a dozen bodies. These victims lived in or around the city of Turin in the west of the country. 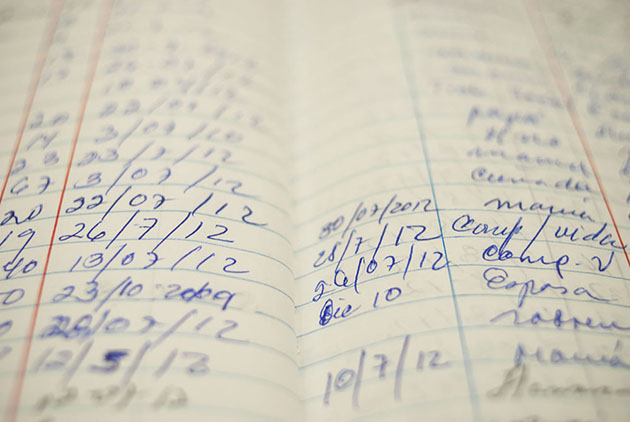 A notebook bears names of missing people and the dates they were last seen. Disappearances have increased in the past year. 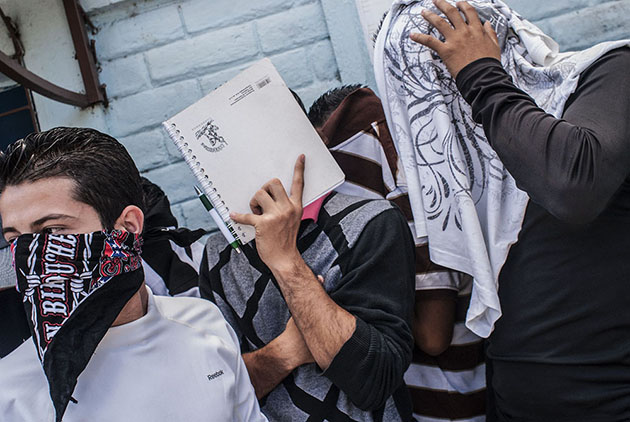 Members of MS-13 cover their faces. 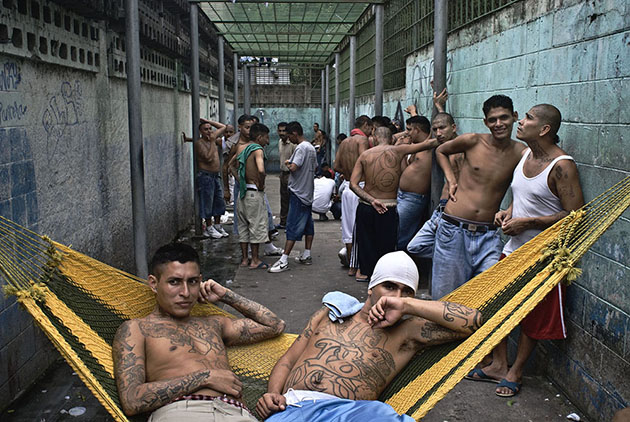 According to a new report by the Organization of American States, El Salvador has one the most overcrowded prison systems in the hemisphere. Imprisoned gang leaders have worked to improve conditions. 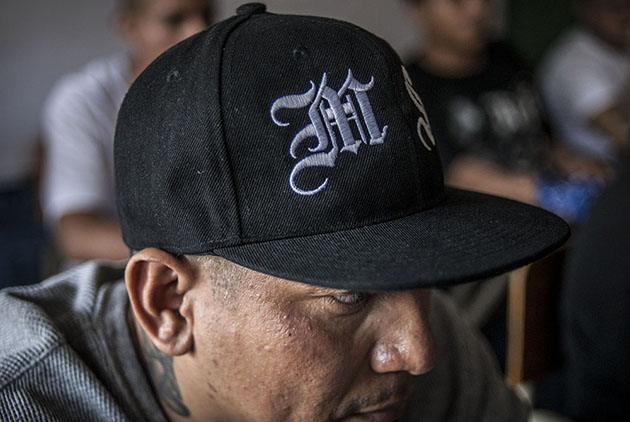 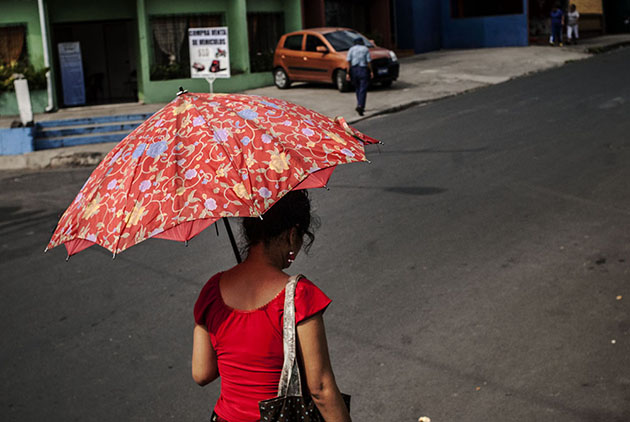 Two decades of gang violence have left many Salvadorans extorted, robbed, threatened, or touched by the death of a loved one. People continue to dream, and are hopeful of one day living in a peaceful nation. 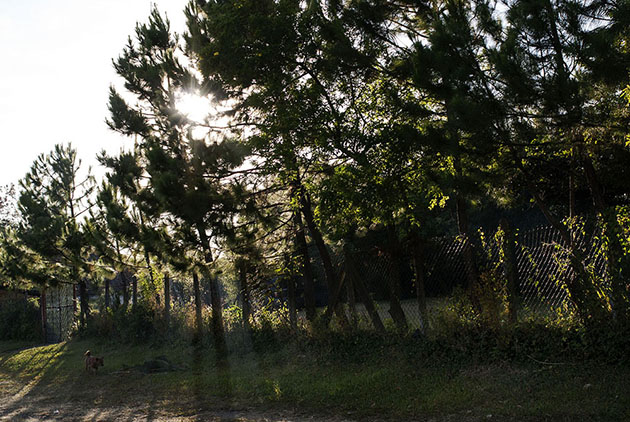 After the truce, the murder rate has plummeted. But extortion and thievery continue to be a huge problems, and psychological trauma persists. 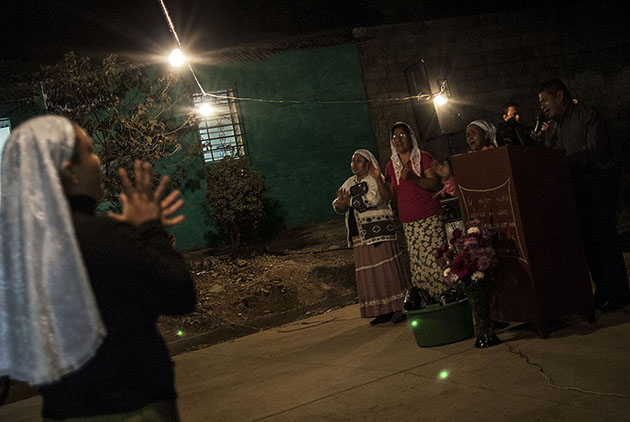 Evangelicals host an outdoor prayer session. Protestant churches have tried to reach out to youth involved in gang activity, both in jail and in local communities.