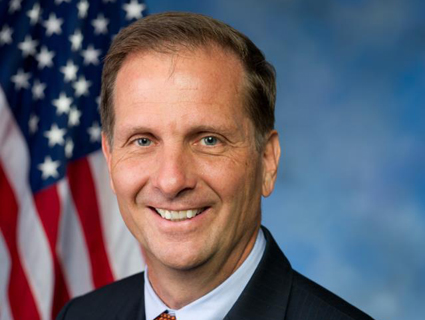 As the new chairman of a key House subcommittee on the environment, Rep. Chris Stewart (R-Utah) will be one of the GOP’s leading actors when it comes to the Environmental Protection Agency and the growing threats from climate change. So with his first hearing as chairman on tap for Wednesday, what does the freshman Republican—and end times novelist—think about anthropogenic global warming?

In response to an inquiry from Mother Jones, Stewart’s office emailed a statement suggesting that more study was needed before he could safely say whether—as 97 percent of scientists believe—humans are responsible for rising global temperatures. And even if they are, he explained, that doesn’t mean we should act:

Climate change is also an extraordinarily complicated discipline. Because of this, it is vital that we ensure that policy decisions are based upon sound science. Before we make any long-lasting policy decisions that could negatively affect our economy, we need to be certain that the science behind our decisions is sound.

He elaborated on those views in an interview with the Salt Lake Tribune: “I’m not as convinced as a lot of people are that man-made climate change is the threat they think it is.”

But if Stewart isn’t sure how he feels about climate change, he’s dead-set in his view of the EPA: He wants the agency dissolved. In August, following a campaign event in the southwest corner of the state, Stewart told the St. George News that the Environmental Protection Agency should be eliminated because, as he put it, “The EPA thwarts energy development.”

During his congressional campaign, Stewart highlighted the Endangered Species Act as the mark of a regulatory state gone wrong. “There is no better example of the overreach of government than in environmental law,” he said in an interview last April with the Freemen Capitalist, a conservative website.

“Heavens!” Stewart said. “Go down to Southern Utah and talk to those folks down there about the Utah prairie dog and see what kind of impact and economic impact—and I mean real economic impact—that these rules and regulations concerning our environment have on people’s lives down there.”

A campaign questionnaire he sent to the Utah Farm Bureau that fall sent much the same message: We’re protecting too many creatures. “The goal of protecting species from extinction is certainly noble, but efforts to protect species currently harm people.”

Before entering Congress, Stewart, who eased past his Democratic opponent in November, was best known as an author. His six-volume Great and Terrible series, in which an agent of Satan sets off electromagnetic pulse that throws Earth into chaos, was endorsed by no less an authority than Glenn Beck, who compared the books to the Rapture epic Left Behind. He’s currently juggling his work on Capitol Hill with another book project—the memoir of former child abductee Elizabeth Smart.

Still, even if he’d like to see the Environmental Protection Agency go the way of the Utah prairie dog, Stewart has shown at least some ability to coexist: The Shipley Group, a consulting firm where he served as president*, received has received $6.3 million in federal funding since 2001—some of it from the EPA.

*Correction: This article originally identified the Shipley Group as a lobbying firm, and Stewart as its founder.