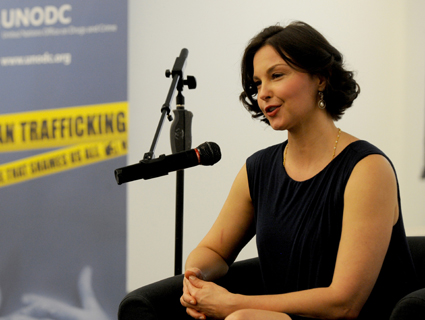 In her first appearance in Washington, DC since hinting at running for Senate in January, Ashley Judd opened up about the sexual abuse she was subjected to when she was younger.

Judd, who is considering a challenge to Senate Minority Leader Mitch McConnell (R) next fall as a Democrat, did not take questions from the press—although she did allude to reporters briefly as the “people here who don’t give a rat’s you-know-what about violence”—spoke for more than a hour on Friday at George Washington University on virtually anything but electoral politics. (Topics ranged from child prostitution, to female empowerment, to reproductive health care, to corruption in the Democratic Republic of Congo, to her Kentucky roots.)

But her most candid remarks may have come when she was asked if she had any advice for women who have been sexually assaulted:

I’ve been aware of gender violence all my life, being a survivor of gender violence. Yet I was astonished when I went to graduate school and started to do a deeper dive on gender violence here in America how prevalent rape and attempted rape is, particularly amongst young people. Am I correct that it’s one in three college* students, college women? So that’s a lot. That’s a third of us in this room. And I think part of what’s important, in addition to how we shape the narrative, is that we all have the courage to talk about it, because we’re as sick as our secrets and the shame keeps us in isolation. And when we find that shared experience, we gather our strength and our hope. So for example, I’m a three-time survivor of rape, and about that I have no shame, because it was never my shame to begin with—it was the perpetrator’s shame. And only when I was a grown empowered adult and had healthy boundaries and had the opportunity to do helpful work on that trauma was I able to say, okay, that perpetrator was shameless, and put their shame on me. Now I gave that shame back, and it’s my job to break my isolation and talk with other girls and other women.

At that point, she acknowledged the audience reaction. “I see some people crying,” Judd said. “And that’s good.”

At that, Judd returned to talking about her work, mostly overseas, working with kids who had been sexually abused. “Because I am that kid,” she said. “I was that kid. And there are least a third of the people in this room who would tell that same story if they had the opportunity.”

Later in the Q&A, a self-identified rape survivor thanked Judd for her answer. “I am glad that you spoke openly today, because I felt so alone,” she said. “I know it is one in four because by my senior year in college I could count.”

Judd first discussed her childhood trauma in her 2011 memoir, All That is Bitter and Sweet. “An old man everyone knew beckoned me into a dark, empty corner of the business and offered me a quarter for the pinball machine at the pizza place if I’d sit on his lap,” she wrote. “He opened his arms, I climbed up, and I was shocked when he suddenly cinched his arms around me, squeezing me and smothering my mouth with his, jabbing his tongue deep into my mouth.”

Although the discussion of rape elicited the greatest emotional reaction from the audience, the bigger takeaway from Judd’s talk—at least according to my Twitter feed—was Judd’s frequent lapses into Hollywoodese. She referenced her friendship with Bono more than once, and at one point joked about spending winters in Scotland (where her husband is from).

*Estimates vary, but it’s somewhere between 20 and 25 percent.