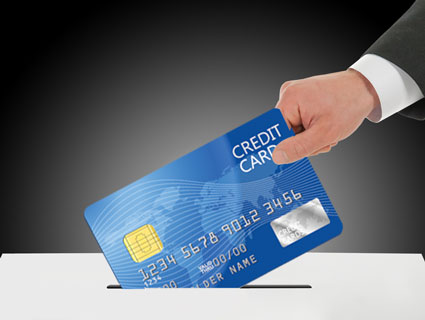 For years, state Democratic parties have been gathering information about individual voters’ political leanings. They have noted down the opinions voters shared with canvassers—which candidates they said they supported or their positions on policy issues.

Now, the record of what people told Democratic volunteers may go up for sale—and not just to political groups. Democrats are looking into whether credit card companies, retailers like Target or other commercial interests may want to buy the information.

State Democratic party leaders formed the National Voter File Co-op in 2011 to sell their voter data to approved groups like the NAACP. The goal was to recoup some of the money local Democratic parties spent collecting and updating their local voter lists, which include voters of all parties.

Much of the data the co-op sells comes from the government and is already part of the public record—information such as voters’ names, addresses and party affiliation.

But local Democratic parties also have information about voters’ views and preferences collected over many campaign cycles. (We wrote about Minnesota’s data-collecting “Grandma Brigade” last month.) Some state Democratic parties have used this raw data to create sophisticated estimates of how likely any voter is to vote for a Democrat, support Barack Obama or have certain opinions, say, on abortion or gun control.

As the co-op moves into its second year of selling data in an already crowded marketplace, it’s looking for new potential clients—and companies who may use the data for commercial purposes, as opposed to political ones, are on the list.

“That’s one of our growth areas,” said Drew Brighton of TargetSmart Communications, which helps administer and market the Co-op’s data. “Over the next six months, we are going to go ahead and make the rounds with some corporate prospects.”

Brighton said retailers, for example, might be interested in figuring out if their customers are primarily Democrats or Republicans. “People want to know who shops in their stores,” he said.

Democrats involved with the co-op do not know what companies might be most interested in buying their voter data.

“What the co-op is doing is saying, ‘Look, there’s a wealth of information here, that could potentially benefit your corporation or your business interests,'” said Ken Martin, a member of the co-op’s board, and the chairman of Minnesota’s Democratic-Farmer-Labor Party.

“Everything is on the table, nothing’s off the table. It’s up to us to figure out what [data] there’s a market for, and whether there’s a comfort level among state parties for selling that information,” he said.

Each state Democratic Party will have the final say over whether to sell their voter information for commercial purposes. If state party leaders aren’t comfortable with selling proprietary data to a certain client, they can opt out.

Individual states have different laws about how their public voting records can be used. Many states mandate that public voter rolls can only be used for “political purposes,” and some states explicitly ban using voting records for “commercial purposes.” The co-op and its clients must abide by these rules.

But state political data laws do not apply to the information about voters that the party itself has gathered.

“Generally, information freely provided to the party by the voter, or data about who participated in a primary [that the party collects] is not subject to any prohibition on it being sold,” said Karl Sandstrom, a former vice-chairman of the Federal Elections Commission and an attorney for the co-op.

This means Democrats are free to sell the opinions voters give to campaign canvassers to credit card companies or marketing firms.

Whether they will choose to do this isn’t certain. Martin, the Minnesota Democratic chairman, said that party leaders will have to weigh the risks of any potential deal.

“Obviously, we know we could make money off our file, but it always comes back to the question of, at what cost?” Martin said.

He said he would evaluate commercial deals on a case-by-case basis.

“I’m not opposed to selling the data if it’s a corporation who shares our values and is going to do some good work with that data.”

Wal-Mart, for instance, would not make the cut, he said.

Consumer data companies like Experian already peddle information about individuals’ political beliefs and donation histories—and also link this information to their consumer habits. This November, Experian Simmons released a study breaking down the political leanings of shoppers at J. Crew, Lady Foot Locker, and more than 100 other major retailers.

But the fact that selling voters’ opinions to companies is even an option for Democrats is another example of how rapidly the data industry is evolving—and how little information individuals have about how their data is being shared.

In his “Consumer Privacy Bill of Rights,” released last year, President Barack Obama argued that when companies collect personal data from consumers, they should only share it in ways consumers expect.

If a company decides it wants to share personal information in a new way, Obama suggested, it should notify the consumers who are affected and provide them with choices about how their data is used.

Although Obama pledged to work with Congress to make the Consumer Privacy Bill of Rights into law, that hasn’t happened yet.

Joseph Turow, a privacy expert at the University of Pennsylvania’s Annenberg School for Communication, said the possibility that Democrats might repurpose voters’ opinions for commercial marketing is problematic—particularly because they had collected that information through “a relationship of trust” with voters.

Both Democrats and Republicans have long traded information about voters’ opinions with outside political groups. Long-time Republican activists have created a new group, the Data Trust, to manage the Republican National Committee’s data and coordinate data exchanges between the RNC and conservative and issue advocacy groups.

Asked if the Republican Party sells the party’s proprietary data to retailers or credit card companies, RNC spokeswoman Kirsten Kukowsi wrote, “Absolutely not—hasn’t happened in past and won’t in [the] future.”

The Obama campaign’s own closely guarded trove of voter information will be used to mobilize support for the president’s agenda through a new nonprofit advocacy group, Organizing for Action, led by top Obama aides.

It’s not clear what other groups may be given access to Obama’s voter data. Organizing for Action did not respond to a request for comment. Staffers have said that passing on the campaign’s voter information to an Obama-focused nonprofit reflects the wishes of the president’s supporters, although supporters were not asked directly about how the campaign should treat their data.

Sandstrom, the lawyer for the state Democratic parties’ National Voter File Co-op, said he doubted the co-op would actually end up selling voters’ opinions for commercial uses, calling it an “abstract concern.”

Democratic Party chairs were not eager to weigh in on the issue.